Activity of Merapi, Semeru, Nishinoshima, Klyuchevskoy and in the Reykjanes Peninsula. A strong explosive eruption occurred in Merapi / Java, this March 3 at 5:22 am local; it was accompanied by a plume of ash reaching 6,000 meters and pyroclastic flows over two kilometers on various sides. The eruption lasted 450 seconds.

Villagers living on its fertile slopes are advised to stand at least 3 km from the crater, as ash fallout is expected within 10 km, mainly on the north side. In Semeru, the PVMBG reports for March 2,

- 1 avalanche earthquake, with an amplitude of 7 mm and a duration of 175 seconds. The sliding distance and the direction of fall are not observed.

The plume emitted is white, raised about 50-100 meters from the summit. The weather is sunny to rainy, the winds are light to moderate to the northeast, east and south. The seismicity of March 1 was characterized by

- 14 avalanche earthquakes, with an amplitude of 4-12 mm and a duration of 50-135 seconds. The sliding distance and the direction of fall are not observed.

The activity of Semeru is still at level 2 / waspada but in recent days, the lava which descends from the crater more frequently and more significantly than usual. The plume that surmounts the summit is constant.

Nishinoshima - morphological changes in the coastline (west and east) since February - Doc. GSI 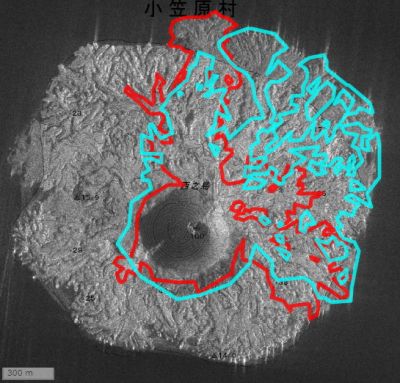 On Nishinoshima, in the Ogasawara Islands, thanks to SAR intensity images from the GSI site, topographic changes due to lava are observed on the north and east sides of the pyroclastic cone, and changes in the coastline are observed on the side north of the island.

In addition, a new topographic change is observed on the southwest side of the pyroclastic cone, which would be caused by lava.

Sources: Geological Survey of Japan & Mirova / Thanks to sherine France for sharing In the Reykjanes Peninsula, the seismic swarm that has been going on in Reykjanestá since February 15 is slowly declining. Since then, around 700 earthquakes have been detected in the region.

At 6:58 p.m. yesterday evening, an M2.5 earthquake was detected near Kleifarvatn.

IMO warns against cave excursions in the Eldvörp region on the Reykjanes peninsula. Dangerous levels of CO2 and low levels of O2 have been measured there recently, in a cave near a parking lot very popular with hikers.

Seismic activity near Thorbjorn has decreased considerably recently. Uplift is no longer observed, which is likely due to the cessation of the influx of magma. The indications show a minor subsidence from mid-February but it is too early to interpret the data.