The Servicio Géologico Colombiano informs the authorities and the community that in recent days, the snow-capped volcano Nevado del Ruiz (VNR) has presented small emissions of ash associated with seismic signals of low energy level.

On March 10, three gas and ash emissions were recorded today at 07:42 h 10:29 and 10:55 (local time), with column heights measured at the top of the volcano of 696, 346 and 552 m respectively, with a dispersion influenced by the wind direction and speed, which varied from the southwest to the southeast of the volcano.

Very fine ash fall is possible near the volcano and in populations located in the direction of the wind regime.

The different monitoring parameters show that the volcanic system is still unstable, which can give rise to new ash emissions.

The level of activity continues in yellow or (III): Changes in the behavior of volcanic activity. The Phivolcs raised the Kanlaon alert level from normal to abnormal / 1, following an increase in seismicity and inflation in the summit area.

Since March 9, 2020, 80 volcanic earthquakes, including 77 low frequency earthquakes (associated with magmatic fluids); since the end of January 2020, the parameters indicate a marked inflation of the upper slopes of the volcano.

This situation of instability can lead to a phreatic eruption or a magmatic intrusion.

Level 1 is associated with the ban on entering a radius of 4 km, and the aviation council to avoid flights near the summit. During the period from March 2 to 8 (posted online on March 10), the INGV provides information on the activity of the upper craters of Etna, mainly characterized

- by Strombolian explosions and an effusion at the level of Voragine (VOR),

- and degassing with intermittent intermittent ash emission of strombolian ash from the new south-east crater (NSEC) and the north-east of the crater (NEC).

At the seismicity level, there is a low seismic fracturing activity and a stationary state of the volcanic tremor parameters. The infrasonic activity remains moderate. No significant deformation. The flow of SO2 is at an average level. The flow of CO2 from soils is at medium-low levels. 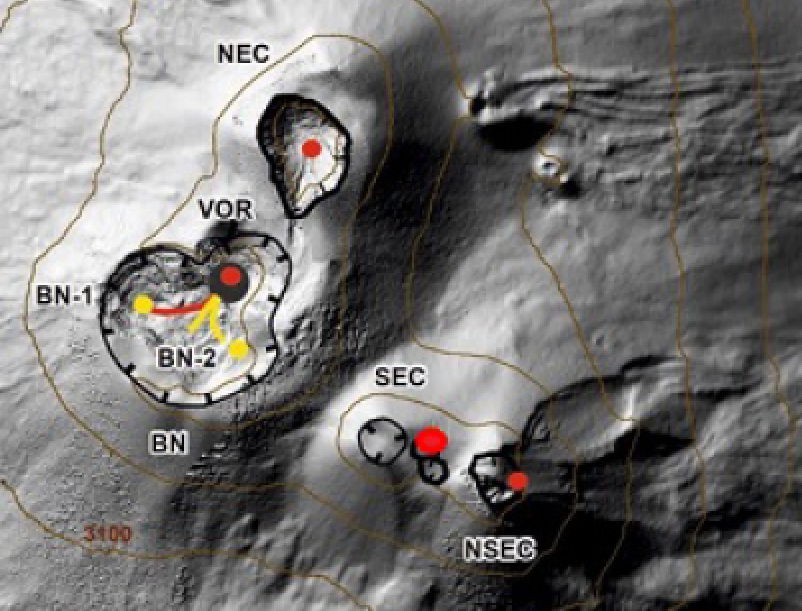 Whakaari / White Island remains in a high state of agitation.

Aerial observations confirm the overall drop in CO2 and SO2 production since the December 9, 2019 eruption, although the latest data shows slightly high amounts of gas compared to recent measurements.

A thermal infrared helicopter survey recorded a temperature of 746 ° C. This was measured on one of the lava lobes and is the warmest temperature measured to date. Despite these high temperatures of fumaroles, a small pond of water is present in the primary crater formed on December 9, 2019. Small-scale jets of this pond water continue to occur, as the activity observed in September-December 2019.

High temperatures and large amounts of gas are consistent with the continued presence of shallow magma below the main vent zone and fall within the expected range of fluctuation for post-eruptive processes. The active vent zone remains a rapidly changing environment and an eruption could occur with limited warning signs.

Plausible triggers for an eruption include the collapse of unstable materials around the vents, the sudden release of magma gas, and the rapid entry of water onto the shallow magma body.