Activity of Nevados de Chillan, Stromboli, Sabancaya, Taal and earthquakes in the peninsula and the Reykjanes ridge. At the Nevados de Chillan volcanic complex, explosive activity was recorded on March 29 at around 6:38 p.m. local, with a scattering of ash at low altitude in an east-southeast direction.

It continued on March 30, with grayish emissions reaching a maximum of 1,400 meters.

The technical alert is maintained in Amarilla The National Institute of Geophysics and Volcanology, Etnean Observatory, informs that the surveillance networks recorded from 23:40 hours UTC approximately on March 30, 2020, a lava overflow from the crater terrace of Stromboli; lava reached the coast line at approximately 1:50 a.m. UTC on March 31.

At the same time as volcanic phenomenology, there is a seismic signal associated with episodes of rolling incandescent blocks along the Sciara del Fuoco and small landslides that generate clouds of dust. 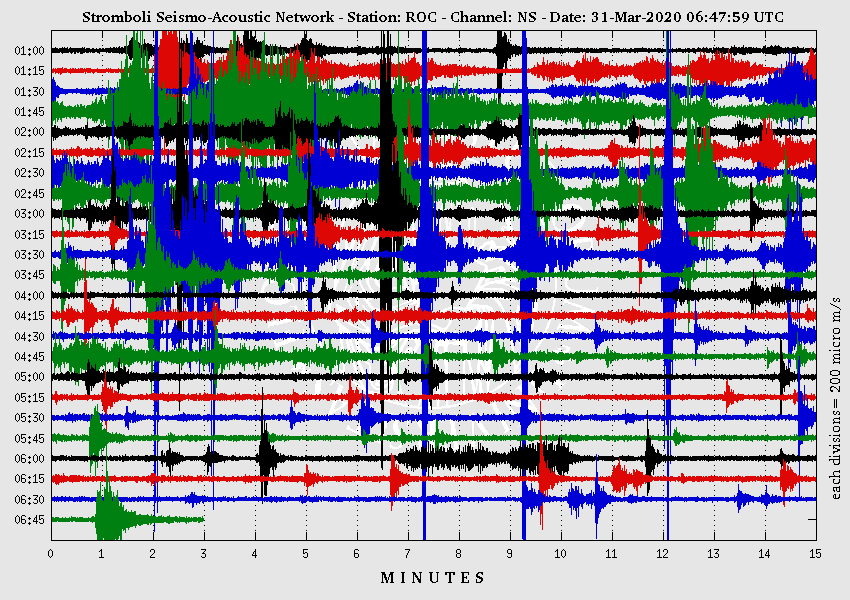 The eruptive activity of the Sabancaya volcano remained at moderate levels between March 23 and 29, with the continuous recording of moderate explosions and the consequent emission of ash and gas. Consequently, for the following days, no significant change is expected regarding its activity.

During the aforementioned period, the IGP recorded and analyzed the occurrence of approximately 536 earthquakes of volcanic origin, associated with the circulation of fluids (magma, gas, etc.) inside the volcano and accompanied columns of gas and ash up to 3 km high above the summit of the volcano, scattered towards the western, southwest and southern sectors of Sabancaya.

In addition, 16 medium to low intensity daily explosions were recorded on average. The monitoring of the deformation of the volcanic structure records significant anomalies.

Satellite surveillance has enabled the presence of 5 thermal anomalies with values ​​between 2MW and 13 MW, associated with the presence of a surface lava body in the crater of the volcano.

The volcanic alert level in orange and it is recommended not to approach within a radius of 12 km. In Taal volcano, March 29 was marked by 93 volcanic earthquakes, associated with the fracturing of rocks, including 6 of magnitude between M1.8 and M3.4, felt in the barangays Banyaga, Bilibinwang and Subic Ilaya.

Low emissions of steam plumes are observed at the main crater and at the vents along Daang Kastila Road.

On March 30, the emissions observed reached only 50 to 100 meters in height, drifting to the southwest. THE number of volcanic earthquakes has decreased and is now only 17 events.

The alert level remains at 1 / abnormal; the prohibited zones remain around the main crater and the Daang Kastila crack. 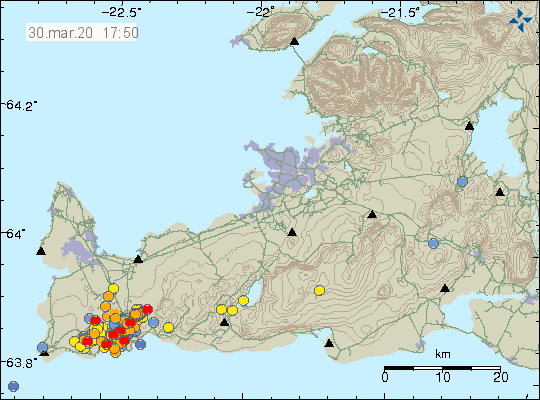 In Reykjanes Peninsula, activity in Grindavík remained high this week after a swarm of earthquakes that started on March 12. This is the same area as where previous earthquake swarms occurred earlier this year.

On March 28, 2020, an earthquake swarm occurred on the Reykjanes Ridge. The largest earthquakes in this swarm had a magnitude of Mw3.5. A total of seven earthquakes occurred which were greater than the magnitude Mw3.0. 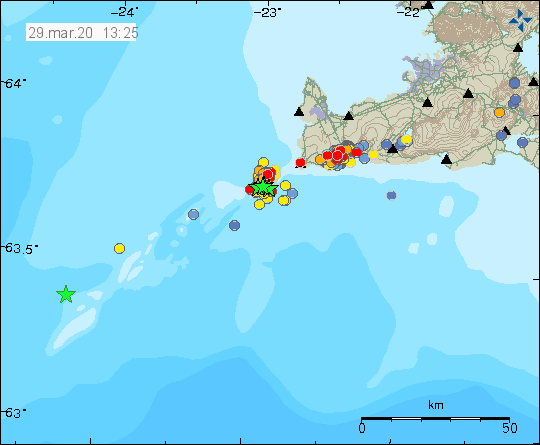