Activity of Yasur, Stromboli and Etna. The increase in the activity of the Yasur volcano, in Vanuatu, in the state of major agitation continues with volcanic ash and / or gas. Some explosions remain intense and volcanic projectiles / bombs may fall in / around the summit crater.

The level of volcanic alert remains at level 2 / state of major agitation. The danger zone is today 600 meters around the volcanic cone.

The risk level for visitors with access to zones inside zone A (zones around the crater to the parking lot) remains increased. The areas and villages located in the southern part of Tanna can continue to expect ash falls and volcanic gases due to the direction of the wind (currently southeast direction). 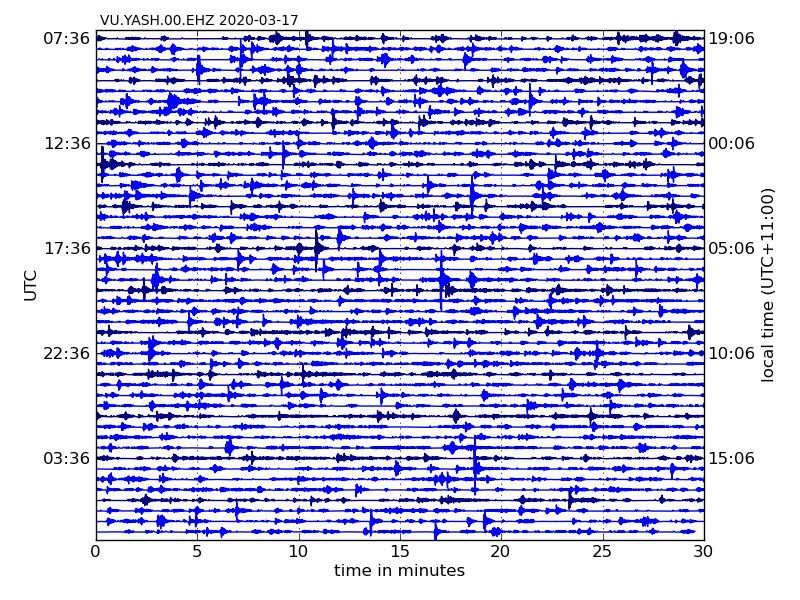 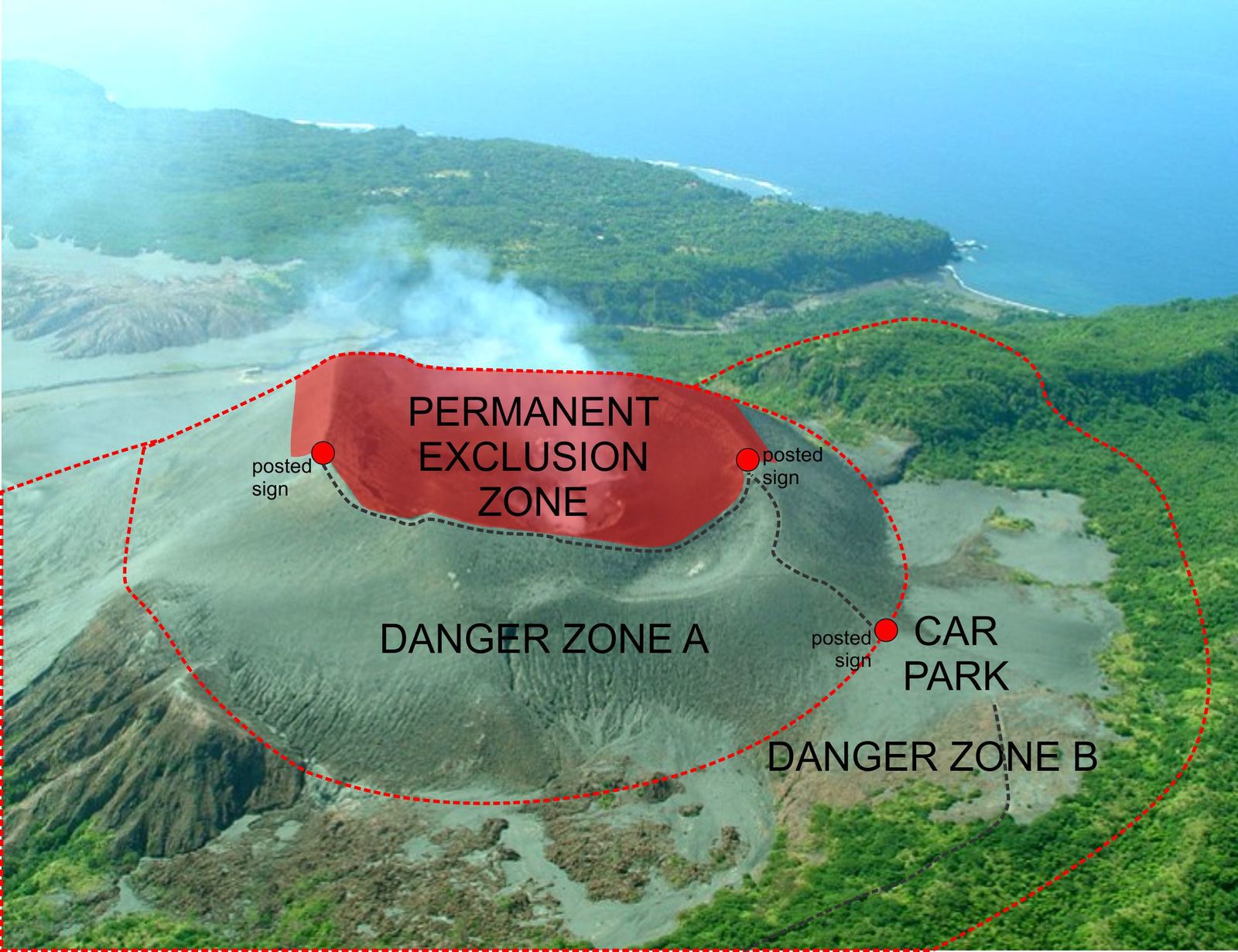 In the North zone, the explosions were mainly of variable intensity, from low (less than 80 m high) to high (greater than 150 m high) of coarse materials (lapilli and bombs). in

numerous explosions, abundant fallout products covered the outer slopes of the area overlooking the Sciara del fuoco and the blocks rolled to the coast. The average frequency of explosions in zone N varied between 8 and 11 events / h.

The explosive activity of the Center-South zone produced explosions of mainly fine materials (ash) sometimes mixed with coarse medium intensity (less than 150 m high) sometimes high (the products exceeded 250 m in height). The frequency of explosions in the CS zone varied between 6 and 14 events / h.

At the seismology and deformation level, the parameters do not show significant variations.

The flow of sulfur dioxide remains at an average level.

The thermal anomalies were monitored by the Sentinel-2 satellite and the estimation of the radiation power and calculated from MODIS and Sentinel-3 SLSTR data; the value of the radiant power obtained from the last MODIS image is approximately 220 MW. 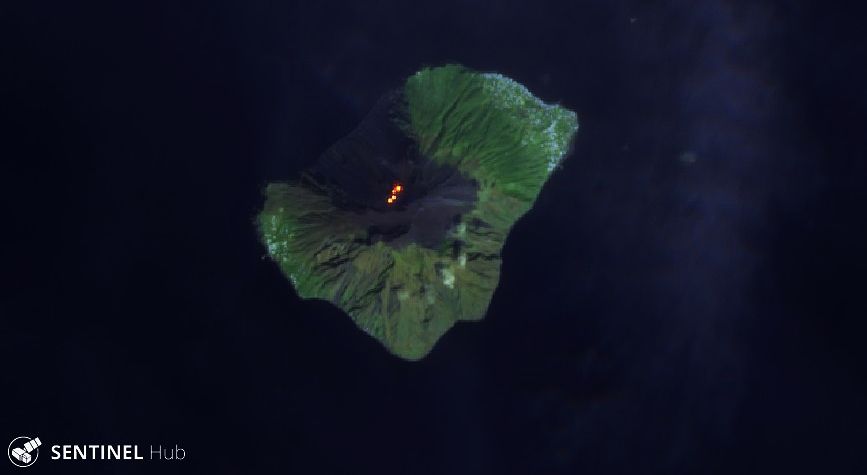 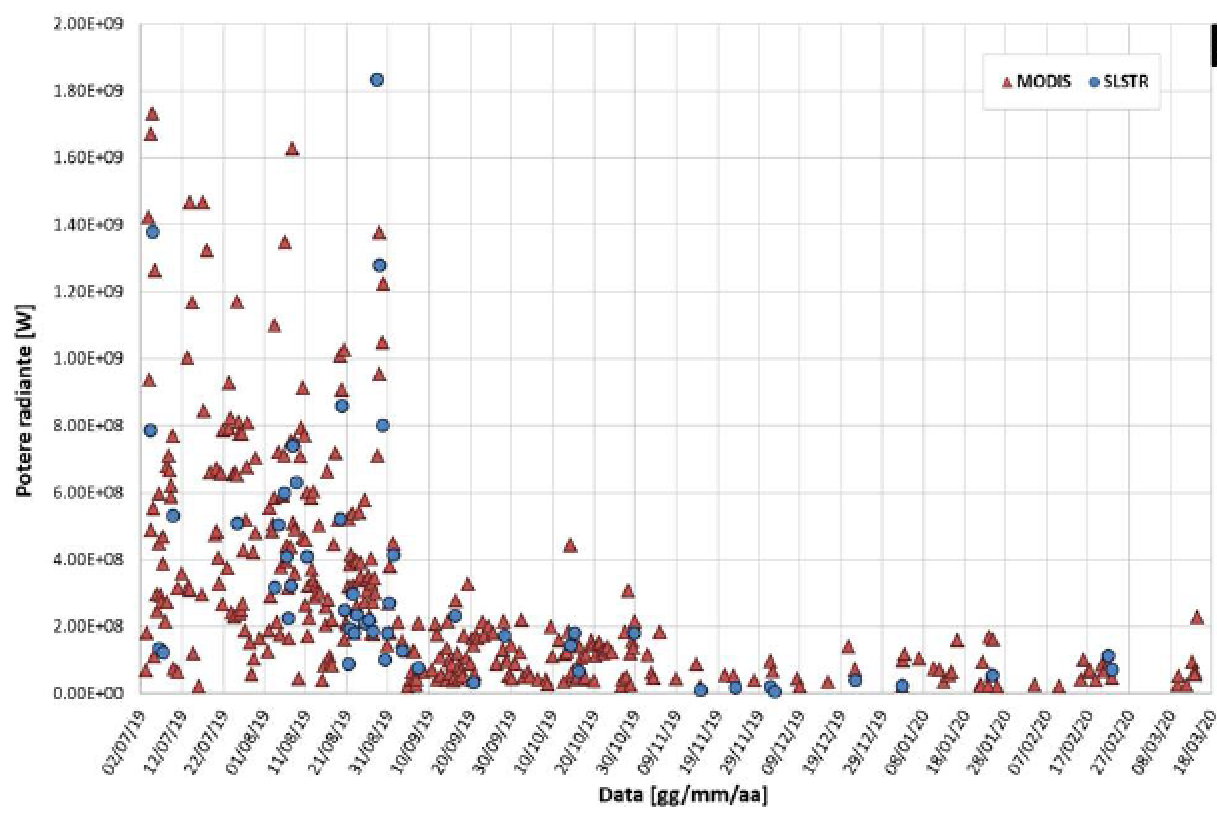 The inspection of the summit activity of Etna for the period from 9 to 15 March made it possible to observe an abundant degassing activity of the upper craters:

the northeast crater (NEC), produced emissions of ash which immediately dispersed into the atmosphere on March 13,

and the New Southeast Crater (NSEC) was also characterized by sporadic ash emissions accompanied by audible roars even at long distances. L 'Etna seen from tremestieri Etnéo in the evening of March 17, 2020. We see strombolian activities with two mouths inside the crater of Voragine, where the central cone was born a little more than 6 months ago. On the right, we see a modest glow at the "saddle cone" of the new crater in the Southeast, where Strombolian explosions and low ash emissions are observed. - photo Boris Behncke / INGVvulcani

In the intra-crater area of ​​Voragine, a strombolian-like eruption continued.

This activity was produced by two separate ash cones.

In the main cone, active since September 12, 2019, the explosive activity was generated by a single mouth located in its summit crater and characterized by sporadic events of high intensity with bombs and shreds of lava expelled between intervals of several minutes of rest.

The second, smaller slag cone is located at the SEA than the previous one. His eruptive activity has been observed on the images of Mr. Cagliato's camera since the evening of March 9, while his training is probably to go back a few days before the inspection, according to the volcanological guides. The cone was characterized by animated explosive activity with frequent launches of bombs and large pieces of lava. At the base of this new cone a small lava flow was visible, more supplied, whose forehead stopped at the base of the main cone.

During the inspection, a third cone of slag was observed which showed no signs of explosive activity; it is located NE of the main cone and NW of the new very active cone. This cone is probably the product of Strombolian activity observed on February 29 (see report of 03/03/2020) at the NE base of the main cone and continued until a few days ago as shown by photographic images of M. Cagliato.

At the seismological level, a modest seismic fracturing activity is reported, and the amplitude of the volcanic tremor is considered to be high.

The Etna soil deformation monitoring networks have not shown any significant change.

The flow of SO2 is at a medium-low level.