Activity of Etna, Krakatau and Merapi . Etna - 04.17.2020 - La Bocca Nuova was filled with lava from the Voragine crater. In addition, a new pit has formed in the central part of the Bocca Nuova. - Photos of Francesco Ciancitto, INGV-Osservatorio Etneo.

The National Institute of Geophysics and Volcanology, Etnean Observatory, communicates that from 20.50 hours UTC on April 17, we observe at Etna a sudden increase in the magnitude of the volcanic tremor which reached the maximum value at 21.26 hours UTC, attesting to high values.

This activity was accompanied by a moderate increase in infrasound activity, which is localized in the area of ​​the SEC / NSEC craters.

In addition, from the network of surveillance cameras, it is possible to observe, with regard to the "saddle cone" of the New Crater of Southeast, gleams attributable to an intracrateric strombolian activity, associated with an accentuation of the thermal anomaly that has long characterized the same area.

Strombolian activity at La Voragine crater, which began in September 2019, continues with small fluctuations; The lava emitted by the cone complex of Voragine filled the crater of Bocca Nuova, where a new pit crater / collapse well is present in the central part.

At the Anak Krakatau, the clear sky above the volcano allowed the Sentinel-2 satellite to acquire a first clear image since the eruption of April 11, 2020, confirming the changes sketched on a radar image of Sentinel-1.

It shows, in addition to the hot spots, a new morphology of the crater area : the pre-existing crater lakes appear to have been partially filled by a lava flow and / or other deposits; and a lava delta, still warm, protrudes on the west coast of the island. 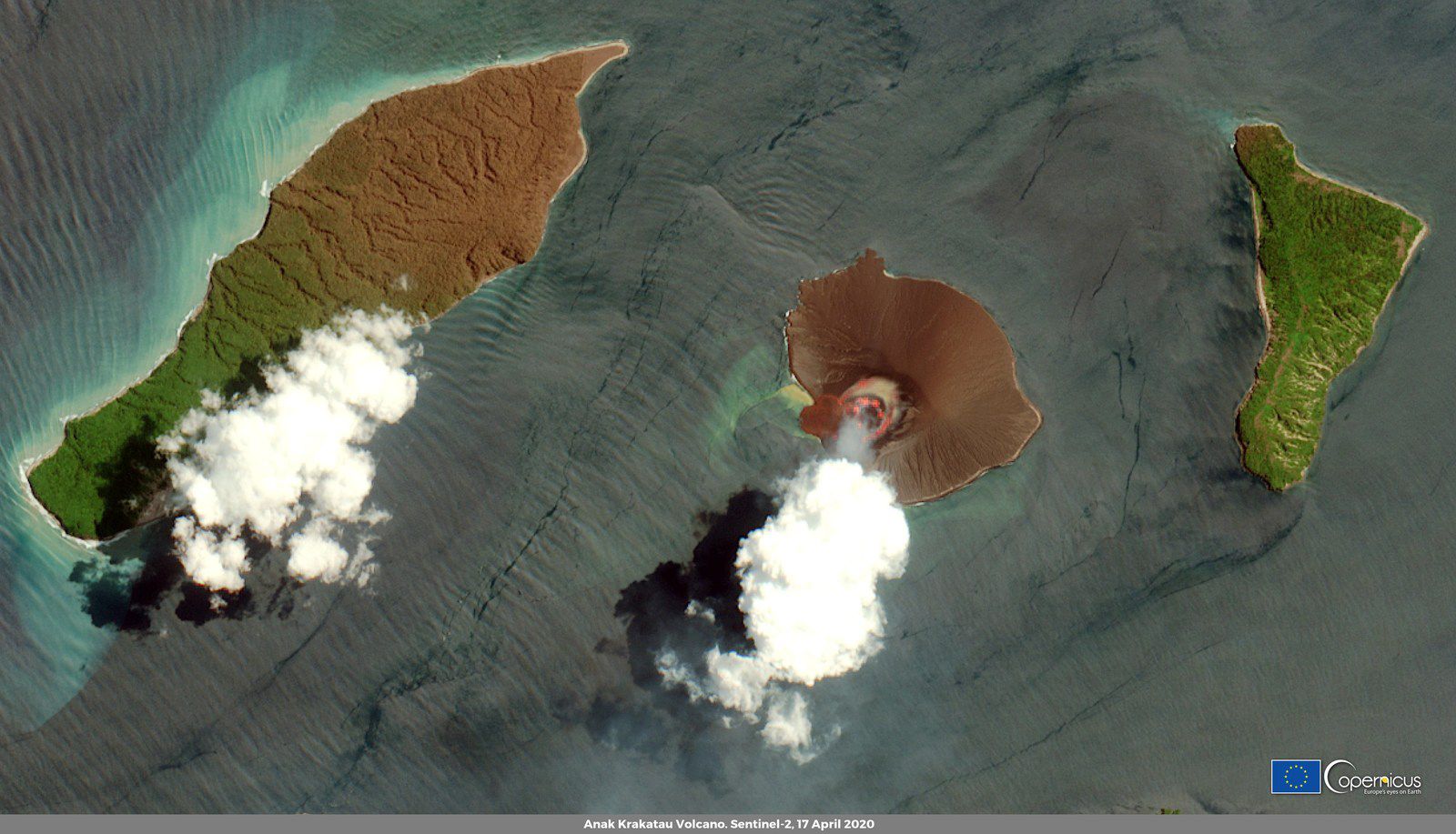 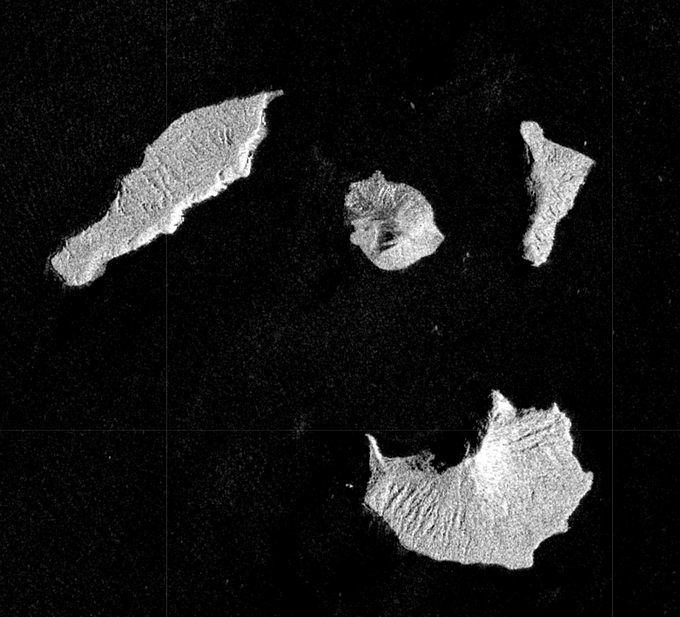 The PVMBG reports the seismicity level for this April 17:

- two eruption earthquakes, including one at 5:32 pm WIB, recorded on the seismogram with a maximum amplitude of 40 mm and a duration of 27 seconds.

- and four episodes of micro-tremor of dominant amplitude at 0.5mm.

A thin white plume rises 50-100 meters above the summit.

The activity level remains at 2 / waspada, with an unauthorized area of ​​2 km radius around the crater. The VONA is orange. 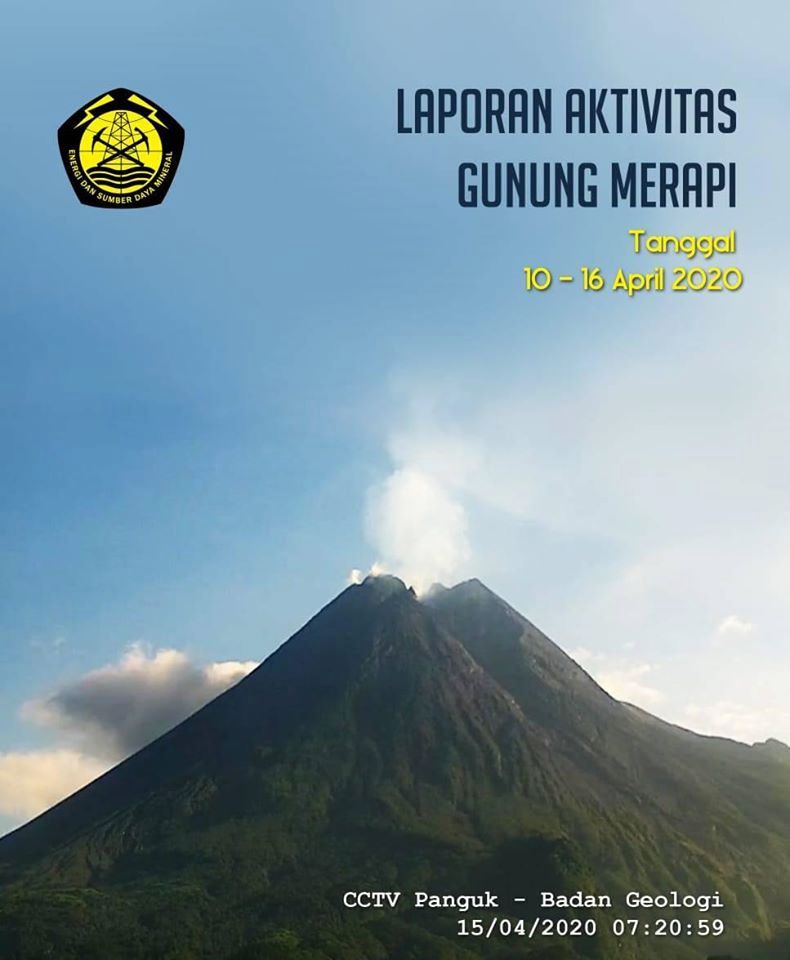 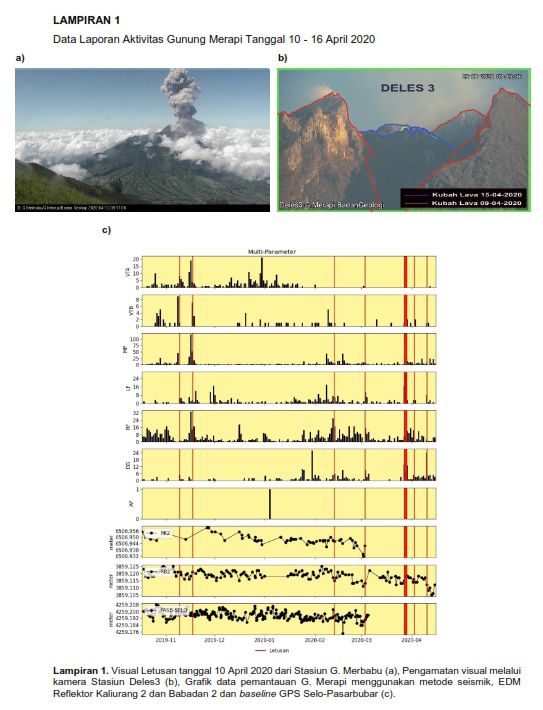 Morphological analysis of the crater area based on photos of the southeast sector showed no change in the morphology of the dome. The volume of the lava dome based on measurements using aerial photos with drones on February 19, 2020 was 291,000 m³.

During this week, the seismicity this week is higher than last week.

Based on the results of the visual and instrumental observations, the PVMBG concludes that:

- The lava dome is currently in a stable state.

- The volcanic activity of Mount Merapi is still quite high and is determined by the level of activity "BE AWAY".

- The current potential danger comes in the form of a pyroclastic flow from the collapse of the lava dome and an explosion of volcanic material from explosive eruptions.