Activity of La Fournaise, Chaiten and an update on magmatic intrusions in the Reykjanes Peninsula.

On April 3, at 6:25 a.m., the lava front could be estimated at around 1,000 m above sea level at the top of the Grandes Pentes, and 3.8 km from the national road, according to visual feedback from the webcam of the OVPF / IPGP located in Piton Cascades.

The eruption has stabilized on the central part of the eruptive fissure. The number of fountains is reduced little by little and soon the eruption will only be active on one or two mouths. In the meantime, the projected pieces of lava fall back and build a spatter-rampart which has already grown well.

Note that during the lateral magma intrusion towards the eruptive site on April 2, between 8:50 am and 12:20 pm, and following the seismic crisis (8:15 am - 8:51 am), the deformations and seismicity were extremely weak. The lateral propagation was thus done in a fairly "passive" way in an already open environment and extremely weakened by the eruptions of 2019 and the eruption of February 10-16, 2020 which took place in this sector. 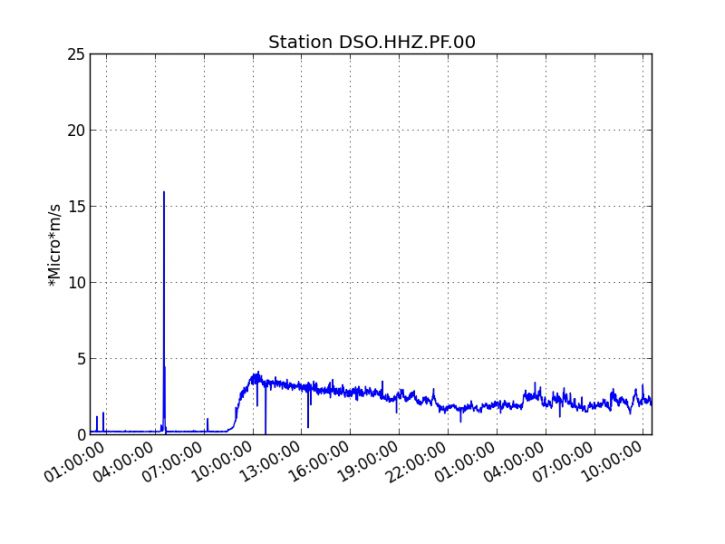 Piton de La Fournaise - Evolution of the RSAM (indicator of the volcanic tremor and the intensity of the eruption) since 02/04/2020 at 00h UT time (04h local time) on the DSO seismological station located at the top of the volcano. (© OVPF / IPGP).

The CO2 fluxes in the far field soil (Plaine des Cafres / Plaine des Palmistes sectors) fell between 28/3 and 01/4 before increasing again. This could correspond to an expulsion of superficial magma (superficial reservoir) by a rise of deeper magma.

SO2 air flows have dropped since yesterday. This drop is in agreement with the visual feedback from the eruptive site which shows weaker activity today.

The estimated surface flows, from satellite data via the HOTVOLC platform (OPGC - University of Auvergne) are greatly disturbed by the cloud cover around the Piton de la Fournaise. Estimates since the start of the eruption fluctuate between 2 and 45 m³ / s with an average around 7-10 m³ / s. This Friday, April 03 at 04.17 local time, an earthquake of local magnitude 2.8 located 3.2 km deep was recorded under the summit of the Chaitén volcano. The National Service of Geology and Mines has indicated that this earthquake is associated with rock fracturing and the dynamics of internal fluids (hybrid earthquake). The volcanic technical alert remains on "verde".

The last period of activity of the Chaiten occurred between May 2, 2008 and May 31, 2011 (GVP). This first historic eruption produced major explosive rhyolitic activity, numerous pyroclastic flows and lahars, and was followed by the installation of a dome complex which filled much of the caldera. GPS measurements, along with detailed analysis and model calculations of the available data, now testify to a new magma deposit west of the Reykjanes Peninsula under Rauðhólar and Sýrfell. The map shows the location of the magmatic deposits which would have occurred during the year on the Reykjanes peninsula. These are preliminary results and the models are simplified, but will be updated as data is received. The map indicates when the intrusions were formed - 1. in orange: January 2020 - 2. in red: February-March 2020 - 3. in green: March-April 2020. - Doc. IMO

This confirms the data that was collected in collaboration with the Institute of Earth Sciences, ÍSORs, HS Energy and the Icelandic Meteorological Office after the start of activities in Thorbjörn.

"The data we have processed indicates that the magma intrusion took place from mid-February to the first week of March. This image was better explained when we received data from GPS measurements from the University, which are not directly linked to our monitoring system, which means that we have not detected them so far, "says Kristín Jónsdóttir, group director of nature conservation at the Icelandic Meteorological Office.

One model places the magmatic intrusion about 8-13 km deep, which is probably deep in the earth's crust at a depth considerably higher than the two magma deposits at Thorbjörn.

"This magma deposit under Sýrfell is the third magma deposit that we have reported on the Reykjanes peninsula since the beginning of the year. The presence of this magma insert shows that it is necessary to examine activity on the peninsula Reykjanes globally, not just local activity around Svartsengi and Reykjanes, " said Kristín Jónsdóttir. It reiterates that it is too early at this stage to draw solid conclusions and underlines the need to examine the current activity in a historical context with other known events in the Reykjanes peninsula. Remains of a group of pseudocraters in the Elliðaárhraun lava fields on the south-eastern outskirts of Reykjavik, Iceland. Rauðhólar's age is around 5200 years. Originally there were more than 80 craters, but their gravel was taken and used in construction. Most of the equipment was taken away during the Second World War for constructions such as Reykjavík Airport and road construction.