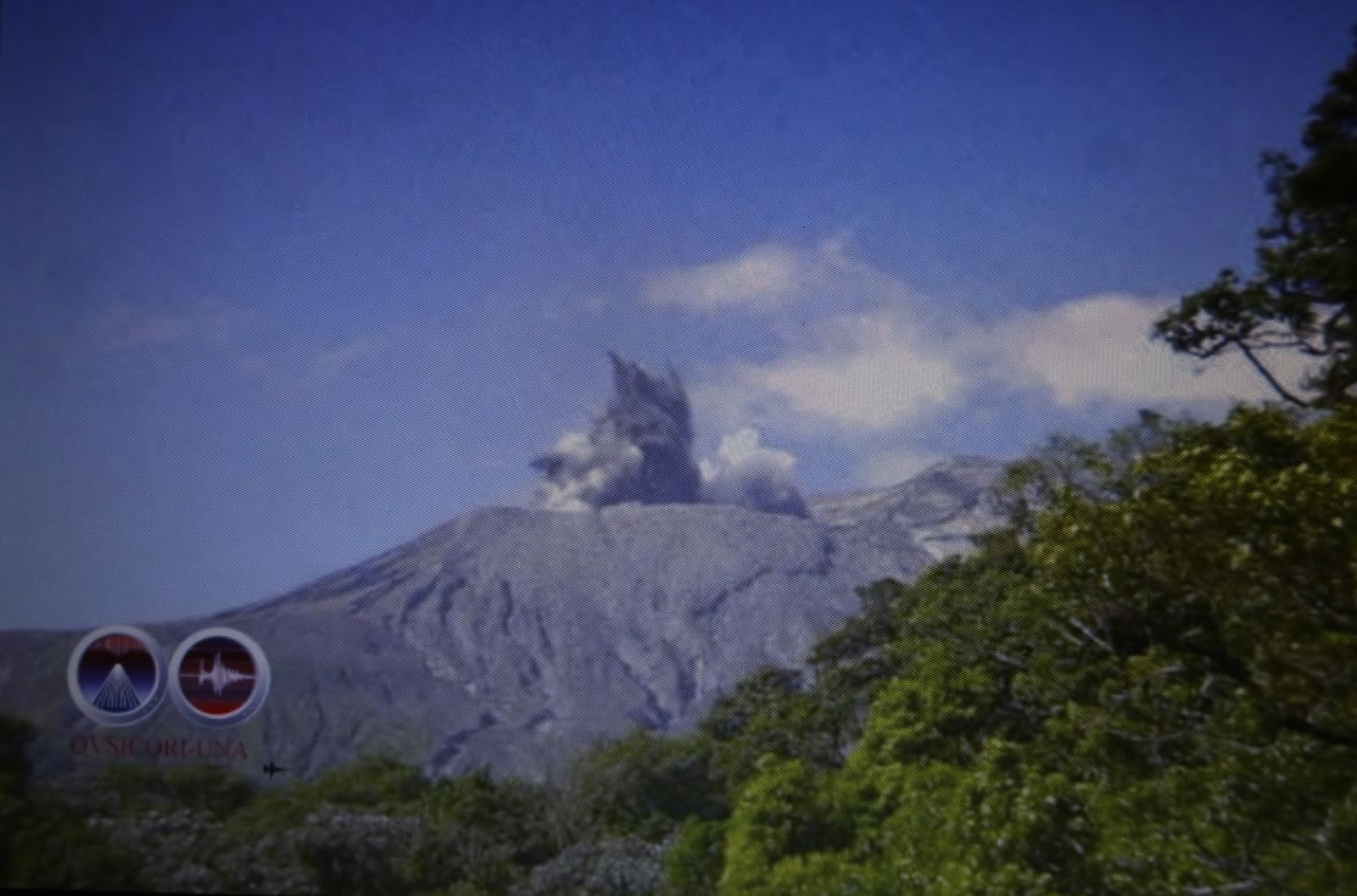 Rincon de La Vieja - 04.04.2020 - degassing after the hydrothermal explosion - screenshot of the video of the Ovsicori.

Since yesterday, the inhabitants of Buenos Aires de Upala (community located towards the northern flank) reported the observation of the plume of the volcano associated with degassing. In Poas, on April 3, 2020, a strong degassing was observed around the old dome. ; medium to vigorous degassing marked mouth A and there was continuous tremor. The SO2 / CO2 ratio has reached the highest values ​​in months. The maximum sulfur dioxide concentration at the watchtower was 6 ppm in the morning.

On April 4, degassing was moderate to vigorous from mouth A. The maximum concentration of SO2 recorded at the watchtower this morning was approximately 4 ppm. The SO2 / CO2 ratio decreased from the previous day by 0.9. There have been slight fluctuations with a tendency to decrease the H2S / SO2 ratio (from 0.11 to 0.06) compared to the previous day The concentration of SO2 detected at the MultiGas station located on the western edge of the crater has reached a value of ~ 11 ppm in the early morning today. 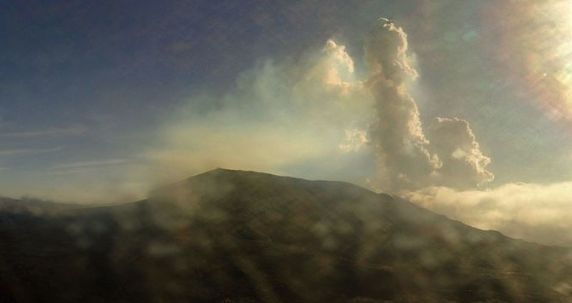 The eruption which started on 02.04.2020 on the eastern flank of Piton de la Fournaise, around 12:20 local time, continues. The intensity of the volcanic tremor (indicator of the intensity of the eruption) has been relatively stable over the past 24 hours despite a temporary increase between 9:00 a.m. and 11:00 a.m. (local time) this morning

The bad weather prevailing in the eastern area of ​​Piton de la Fournaise at the beginning of the morning did not allow us to locate the casting front using the images from our cameras. Piton de La Fournaise - Evolution of the RSAM (indicator of the volcanic tremor and the intensity of the eruption) since 02/04/2020 at 00h UT time (04h local time) on the DSO seismological station located at the top of the volcano. (© OVPF / IPGP). Over the past 24 hours:
- no significant deformation has been recorded,
- but a marked resumption of seismicity under the summit zone should be noted with 13 superficial volcano-tectonic earthquakes (<2 km deep) over the past 11 hours, including 10 over the past 5 hours.
Note that following this recovery in seismicity, the OVPF / IPGP lost data from one of its stations located near the eruptive crack (station became unreachable). A request for aerial reconnaissance via the Air Force Gendarmerie Section was requested in order to have a visual feedback of the situation at the eruptive site and to see if any new cracks would have opened.
- at the same time, the flow of CO2 into the soil at the distal stations (Plaine des Cafres, Plaine des Palmistes sector) is on the rise again. This increase could reflect the continuation of a deep re-supply of magma. 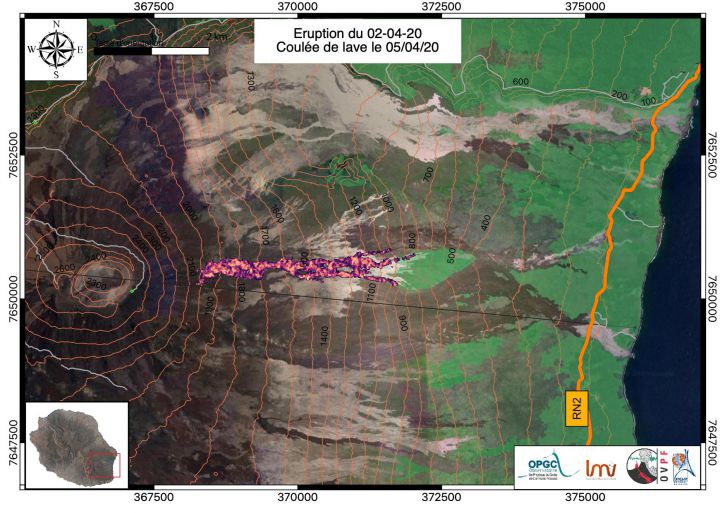 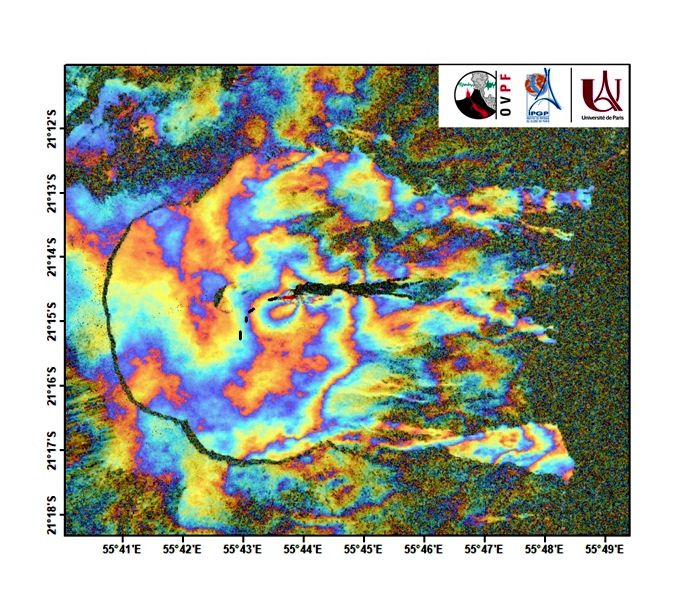 Piton de La Fournaise - Interferogram representing the deformations at Piton de la Fournaise associated with the eruption of April 2, 2020 (© OVPF-IPGP). In addition to ground measurements, the OVPF also uses a satellite technique called dInSAR to monitor the building's inflation / deflation cycles associated with magma movements at depth. To do this, the satellite “illuminates” an area of ​​the ground with an electromagnetic wave and collects the signal reflected from the ground. The comparison of two measurements of this type of the same surface taken at different times makes it possible to image the deformations of the surface. The above interferogram shows the deformation of the surface associated with the eruption of April 2, 2020. (© OVPF-IPGP).

An acquisition of the Sentinel1 satellite yesterday at the end of the afternoon (04.04.2020 at 18:52 local time) made it possible to carry out a mapping of the lava flow, as well as an interferogram in order to visualize the deformations at the scale of the Fouqué enclosure.

The interferogram above shows the deformation of the surface associated with the eruption of April 2, 2020. Each complete color cycle (from red to blue) of the interferogram corresponds to 27.8 mm of displacement from the surface to (positive) or opposite (negative) of the Sentinel-1 satellite (whose direction is represented by the arrow "LOS" at the top right of the figure). The black lines represent the location of the eruptive cracks of the eruption of February 10-16, 2020 and the red line the location of the crack opened on April 2, 2020. The estimated surface flows, from satellite data via the HOTVOLC platform (OPGC - University of Auvergne) are still greatly disturbed by the cloud cover around the Piton de la Fournaise. But an increase seems to take shape over the last 12 hours with flows fluctuating between 3 and 63 m3 / s. and an average around 15-25 m3 / s. over the last 12 hours.