In Ecuador, the surface and internal activity of Sangay remains unchanged, and qualified as "High".

On May 5, IGEPN noted 7 explosions, and ash emissions could be observed towards the southwest.

VAAC alerts were recorded with heights of 870 meters above the level of the crater and in a southwest direction.

A lahar signal was recorded in the volcanic station on the afternoon of May 4, with a duration of 3 hours. Seismic activity remains high on May 5, 2020 at Anak Krakatau, although slightly down from the previous day with:

- 148 low frequency earthquakes, with an amplitude of 4 to 30 mm and the duration of the earthquake from 4 to 14 seconds.

- 8 hybrid earthquakes, with an amplitude of 6 to 9 mm, the S-P is not observed and the duration of the earthquake is 5 to 10 seconds.

- 4 episodes of continuous tremor with an amplitude of 0.5-8 mm, dominating 2 mm. 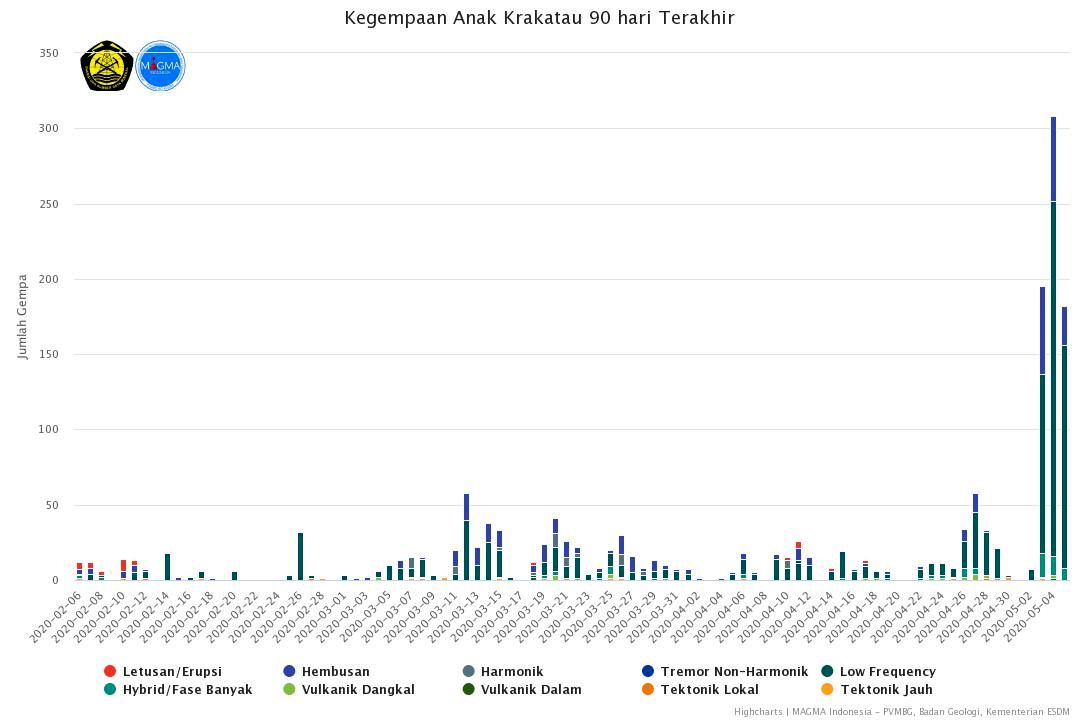 In the week of April 27 to May 3, Etna presented a strombolian activity to Voragine (VOR) and to the new southeast crater (NSEC). At La Voragine, an inspection on April 30 revealed that the effusive activity of the mouth of the principal cone had stopped, in progress since September 12, 2019, and the lava field is being cooled.

Strombolian activity continues on the other hand at the level of the intracrateric cones of the VOR, with gray-black ash emissions several hundred meters high, during the main cone explosions. During the night of May 3-4, the strombolian explosions from the VOR crater appeared particularly energetic, and the coarse material produced fell outside the edges of the crater, settling on the southern flank of the Bocca Nuova crater. .

It was also observed that the depression that formed inside the BN of the crater has increased compared to what was observed during the inspection of April 18, 2020. Etna - a) Overview of the BN and VOR craters taken during the May 1 inspection from the edge south of BN. The arrow indicates the depression which widens at the bottom of the BN crater (photo M.Coltelli). b) thermal image of the area framed in yellow in a), taken during the inspection on April 30. Active flows are no longer present and the entire lava field cools down (images by L. Lodato). - Doc INGV OE Etna - Thermal images of strombolian activity at the VOR crater from the a) main cone formed on 12/09/2019 and b) from the cone formed on 03/09/2020, photos during the inspection on 1 May (taken by F. Ciancitto). - Images of cameras visible from La Montagnola showing c) strong Strombolian activity in the VOR crater and d) the coarse products of the explosions which fall on the southern flank of the BN crater. - Doc. INGV OE During the week, a pulsatile degassing of the new Southeast crater continued. The presence of flashes at night showed that strombolian activity continued at the level of the "saddle cone", without expelling incandescent materials. Sometimes this activity was accompanied by the emission of reddish ash, quickly dispersed in the atmosphere.