At Mt St. Helens, the USGS began daily geodetic measurements at the periphery of the bulge of the northern flank on April 25, recording a constant outward movement of 1.5-2 m / day until May 17. The direction of movement was almost horizontal, toward the NNW. St Helens - Article of 03.05.1980in the Columbian newspaper commenting on the growth of the bulge - one click to enlarge

The first half of May was marked by explosions similar to those of early mid-April, which continued until May 14.

Several dozen or more M 3 earthquakes per day continued to be recorded until May 17. The total release of seismic energy remained relatively constant until the end of April, then decreased slightly. 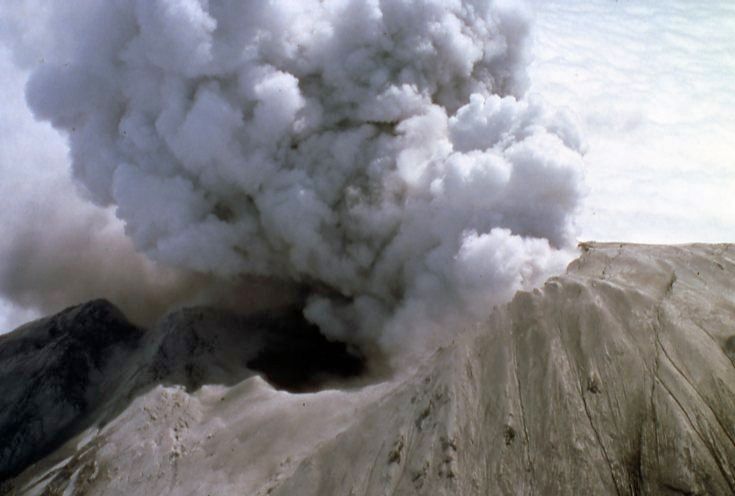 On May 17, David Johnston took charge of Coldwater station, the weather was sunny.

On the 18th, at 7:00 am, he transmits his latest observations by radio to the center of Vancouver: earthquakes, deformation, SO2 emission, everything is similar to what we have known for several weeks.
At 8 o'clock. 32, a brief message, which has become famous since:

... we will find nothing, neither facilities, nor David Johnston ... the St Helens erupted !!! 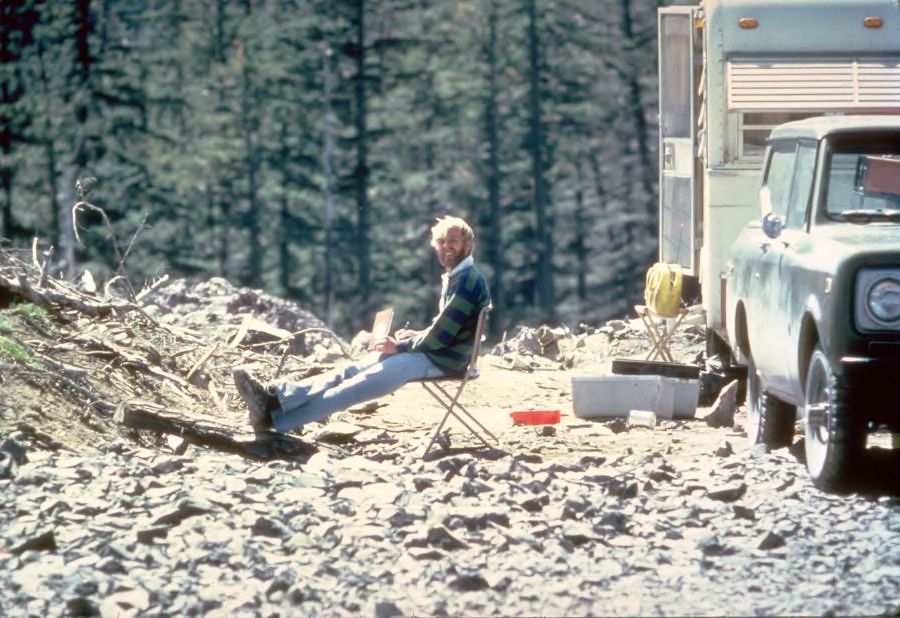 St Helens - David Johnston at the Cold Water II observation post May 17, 1980 - one day before the eruption and its death - photo Harry Glycken / USGS

At this time, the seismographs record an earthquake of about M 5 (its unusual wave characteristics prevented a simple calculation of the magnitude).

A remarkable series of photographs shows that the entire bulge of the northern flank immediately began to separate from the volcano along a crack that opened on its upper section: Landslide

Significant faults put the hydrothermal system in contact with the volcano's magma: the groundwater saturating the top of the volcano and heated by the magma above 100 ° C cannot boil given the pressure gradient; during the sudden collapse of the northern flank, the overheated water instantly turns into vapor and on contact with the magma, generates a very violent phreatomagmatic eruption: two simultaneous explosions, a plume rises in the sky while a gigantic lateral blast is produced. The speed of expansion is unimaginable: 400 then 1,100 km / h .; the interior temperature of the cloud is 260 ° C; the breath tears away the trees on almost 600 km² ... 30 seconds of hell. 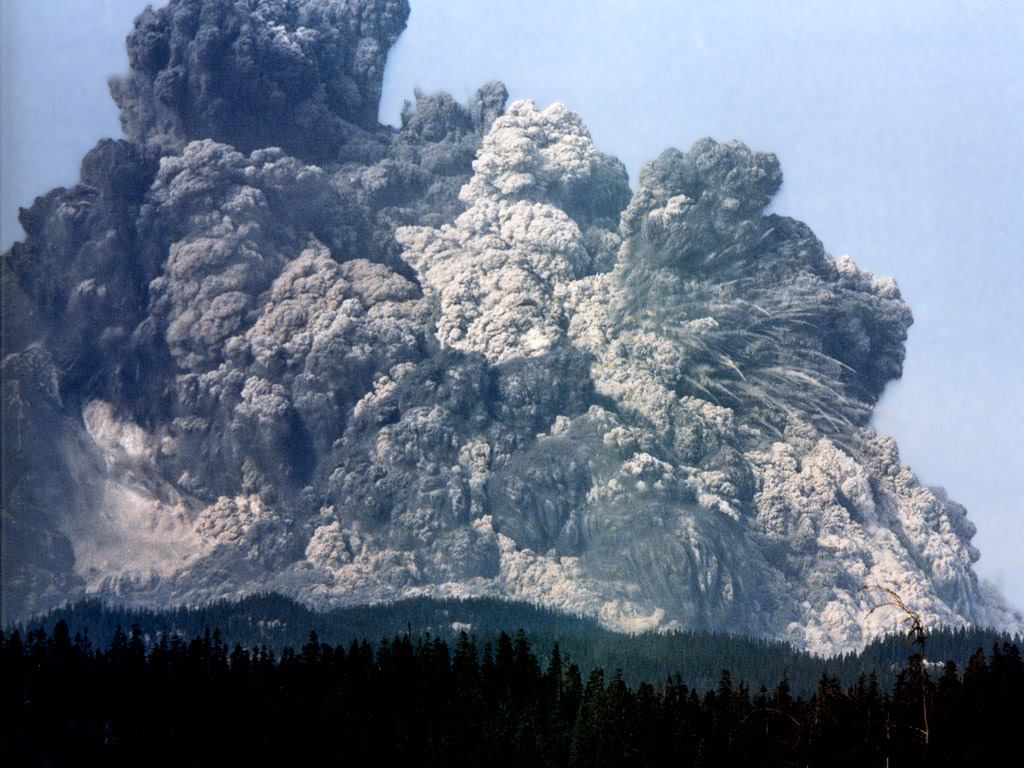 The avalanche of debris that follows the blast carries ashes, blocks of stone, pieces of ice, felled trees, in total more than 3 km³ of debris which will accumulate in Spirit Lake and the Toutle River, which will be filled in 30 km.

The destruction is almost complete in an interior area almost 10 km wide, where no trees remain in the previously heavily forested area. Beyond the interior zone, all the trees were thrown to the ground, pointing outwards from the source of the explosion in an almost uniform radial pattern. In the few hundred meters outside of the explosion area, trees were burned but remained standing. St. Helens - a tree cut by force of the blast (the shovel gives the scale) - photo USGS / S.W.Kieffer St Helens- construction machinery swept by the breath of the eruption of 18.05.1980 - photo AP

Almost simultaneously with the ejection of the lateral explosion, a large vertical plume rose rapidly from the preexisting summit crater more than 19 km above sea level (as measured by the airport weather radar Portland), going through an unusually high tropopause at 13.5 -14 km. Vigorous feeding of the vertical column continued for more than 9 hours - Plinian phase -, before gradually declining at the end of the afternoon. The ash clouds moved quickly to the northeast and east. 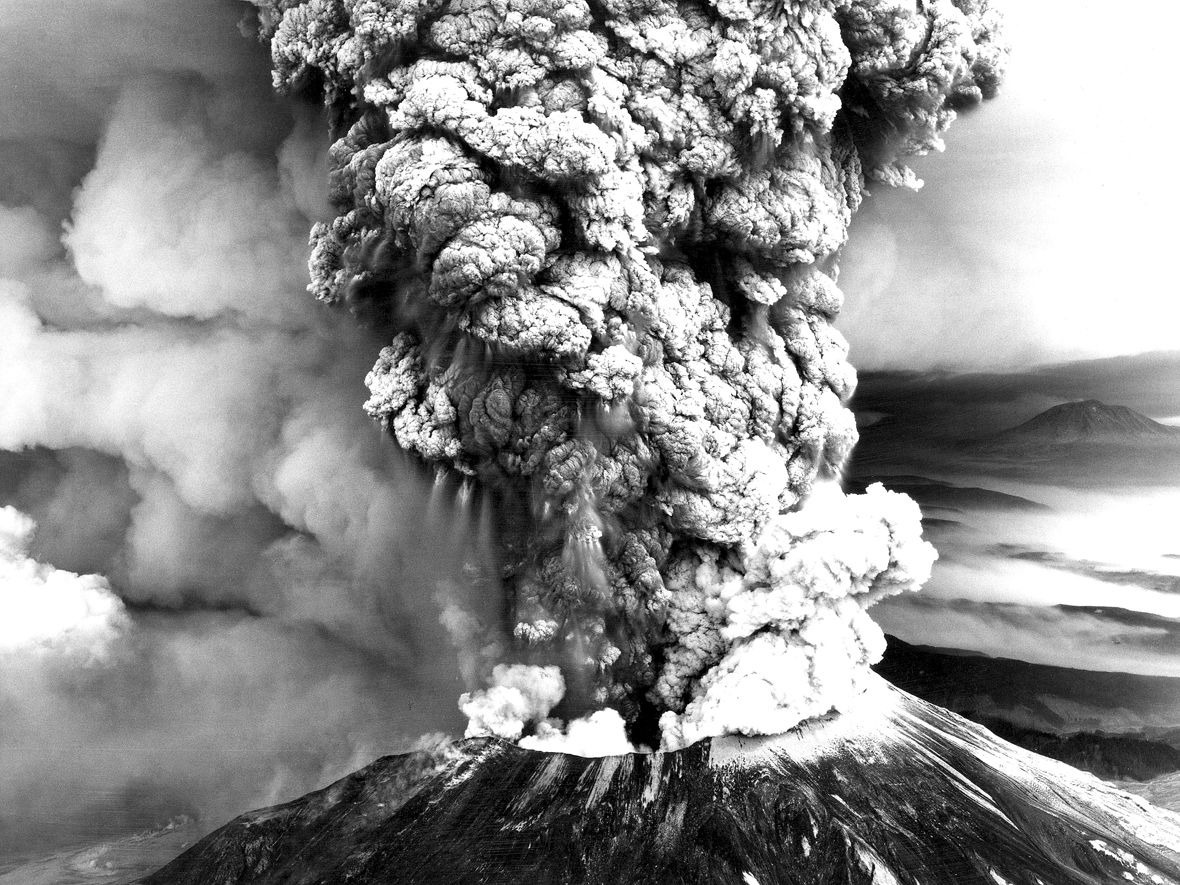 Lahars follow, due to the melting of ice and snow, which transport the ashes and mud up to 45 km from the summit, continuing along the Cowlitz River, where suspended sediments, logs and d '' Other debris fills the waterway, blocking many ships in the port of Portland. 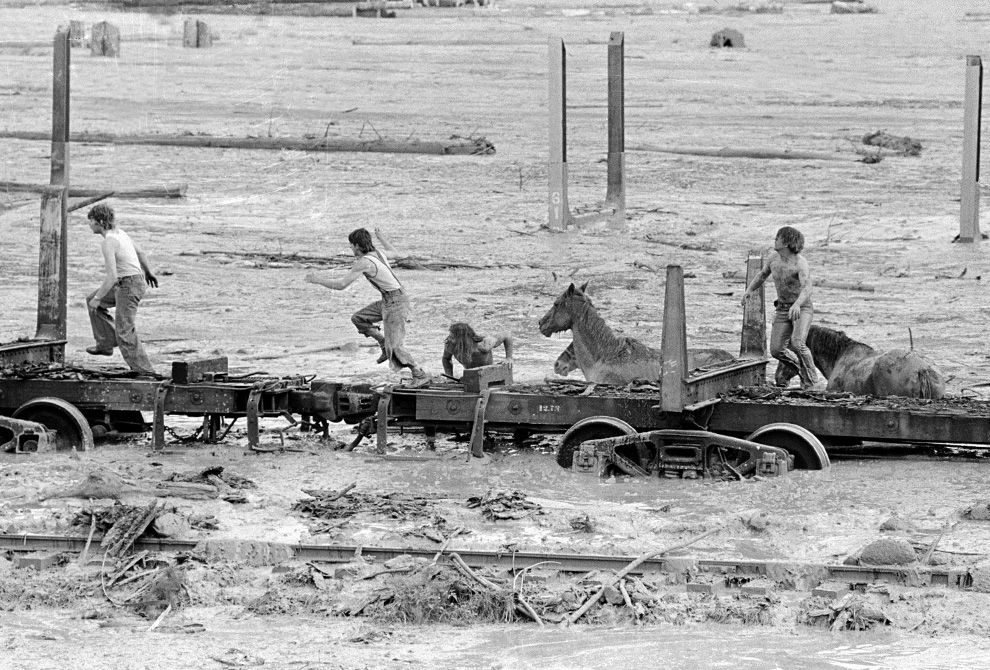 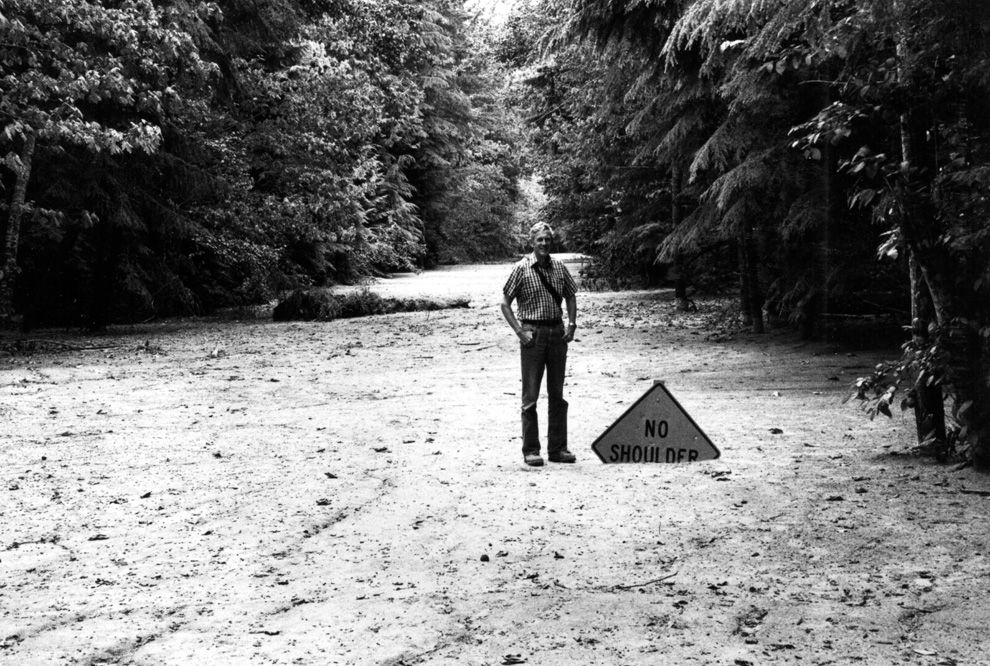 The pyroclastic flows, generated both by the collapse of the vertical column and the direct emission through the great breach to the north produced by the directed explosion (blast), left a pumice deposit in the shape of a fan s 'extending into the Spirit lake and the Toutle river, covering deposits of debris flow in this area. Large amounts of ash fell over a large area of ​​Washington, northern Idaho, west and central Montana. Ash Falls in Ritzville, Washington, more than 300 km from Mt. St. Helens, total at least 7 cm. At Spokane, 500 km NE of the volcano, visibility was briefly reduced to just 3 m. around 3:00 pm A trace of ash fell in Denver around noon the next day, and USGS hydrologists detected a slight fall of ash into certain parts of Oklahoma.

The most reliable data cited by Blong (1984) total 57 deaths, killed by the avalanche and the blast, or in the main devastation zone.

Washington state officials have estimated the financial losses to private businesses and state and local governments to be at least $ 2.7 billion. Memorial to the victims of the eruption of 18.05.1980 and commemorative plaque to David Johnston - one click to enlarge