The Instituto Nazionale di Geofisica e Vulcanologia, Osservatorio Etneo, reports that Strombolian activity was recorded by surveillance networks at 12:12 local time (10:12 UTC) at the saddle cone located between the old and the new cone of the Crater of South-East of Etna
Strombolian activity began to increase from 08:45 UTC in the New Southeast crater, and is accompanied by a modest emission of volcanic ash, which is blown by the wind towards the northeast.
From a seismic point of view, since 09:20 UTC, the amplitude of the volcanic tremors has shown an increase in high values. The source of the volcanic tremor is located near the new southeast crater about 2,900 m above sea level. The infrasonic activity also showed a slight increase, with events being located at the new southeast crater.
The deformation on the ground shows no significant impulsive variation associated with continuous activity. However, a trend of northward movement at the Pizzi Deneri and Northeast crater stations initiated in early May continues. During the week of May 11 to 17, 2020, the eruptive activity of the Sabancaya volcano remained at moderate levels, with the recording of an average of 12 daily explosions, accompanied by plumes of ash and gas reaching 2, 5 km high above the summit of the volcano, dispersing in an east and southeast sector. Consequently, for the following days, no significant change is expected regarding its activity.

The IGP recorded and analyzed the occurrence of approximately 413 earthquakes of volcanic origin, associated with the circulation of fluids (magma, gas, etc.) inside the volcano.

Satellite surveillance identified the presence of 7 thermal anomalies with values ​​between 1 MW and 10 MW, associated with the presence of a body of lava on the surface of the volcano crater.

The volcanic alert remains in Naranja, with a prohibited area of ​​12 km radius around the crater. 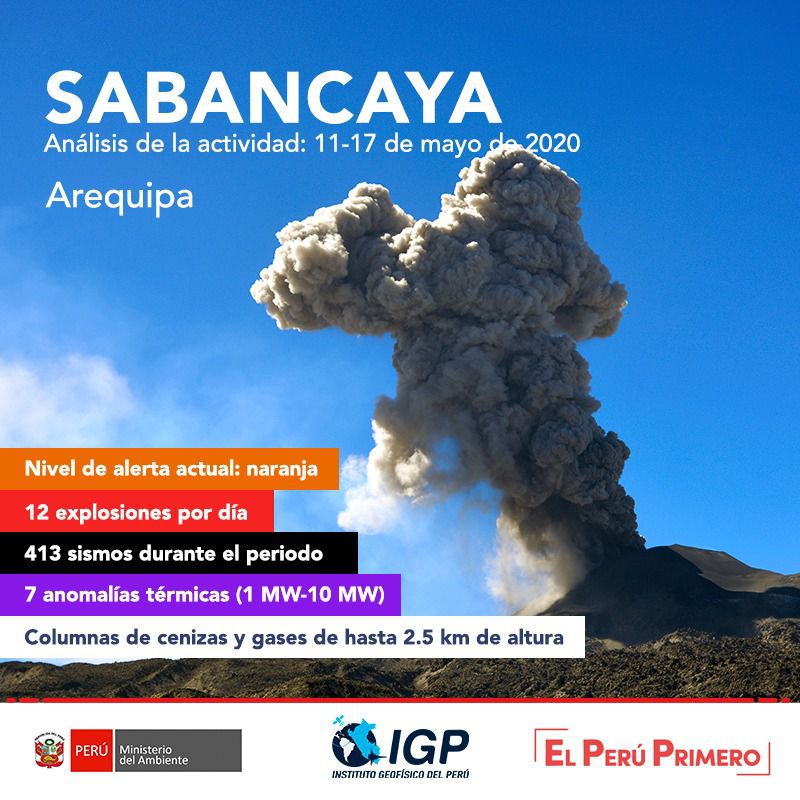 Volcanic earthquakes with epicenter near Yugama crater of Kusatsu-Shirane, on the Japanese island of Honshu, have been increasing for weeks.

According to the JMA, volcanic activity is increasing on Mount Shirane, with the possibility of an eruption which could affect an area of ​​about 1 km near the active crater Yugama.

Source: JMA Information on the state of the Kusatsu-Shirane volcano N ° 49. In Poas, no surface rash is reported.

The heavy rains of May 17 raised the level of the acid lake, where we observe a degassing of mouths A and B.

The seismometers detected on the evening of May 18 a tremor which faded this morning. On 19 may, a frequent record of low-frequency (LP) and low-amplitude volcanic earthquakes is maintained. Low amplitude tremors are variable in amplitude and occur between continuous and banded tremors.