In the past 24 hours, 221 exhalations have been identified, accompanied by water vapor, volcanic gases and sometimes small amounts of ash at Popocatépetl.

In addition, two moderate explosions were recorded today at 04:56 and 07:18. The first explosion ejected incandescent materials on the sides near the crater.

A minor explosion was also recorded today at 7:33 a.m., with an ash plume at 3,000 meters. The emissions from the three explosions dispersed in a southwest direction.

In addition, 166 minutes of low and medium amplitude tremors were recorded. Following the activity, a slight fall of ash is reported in the municipalities of Zacualpan de Amilpas, Temoac and Amayuca belonging to the state of Morelos.

From the morning when the volcano is visible, all emissions will be dispersed towards the southwest

The volcanic alert remains at Amarillo Fase 2, with the reminder of the 12 km radius exclusion zone, while new images of incursion into the summit zone are posted online by irresponsible. 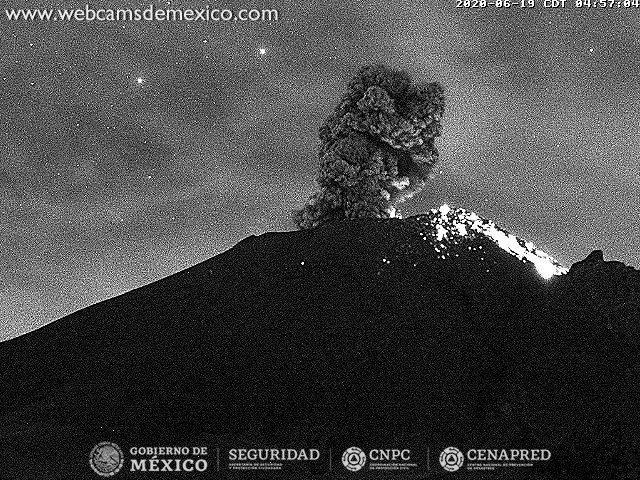 Popocatépetl - explosion of 19.06.2020 / 04h56, and development of the eruptive plume following the incandescent fallout on the upper slopes - image webcams of Mexico

At the Fuego volcano, Insivumeh reports on June 19 a slight white degassing at a height of 4,200 m above sea level, and 7 to 9 light and moderate explosions per hour which expel columns of gray ash at a height of 4,300 to 4,700 m. asl., which disperse in a west and southwest direction, and which are accompanied by incandescent pulses between 200 and 300 meters above the crater, as well as weak and moderate avalanches in the direction of the canyons of Santa Teresa , Ceniza and Las Lajas, some extending to the edge of the vegetation.

A low and moderate rumbling is perceived, causing shock waves causing vibrations in the houses of the villages near the volcano on its southern flank. Sounds similar to train locomotives are heard for periods of 2 to 5 minutes.

Rain and thunderstorms are raging over this western part of the volcano. Weak lahars descend the Seca and Mineral barrancas this June 19, with the possibility of becoming moderate when the flow of barrancadas joins. If the rain persists, the generation of more lahars is not excluded.

Eruptions follow one another daily at Fuego, but they are rarely observable due to the cloud cover in this season. Images taken by the camera in real time by Crelosa made it possible to report on this activity on June 18. Fuego - the Crelosa camera and its acrobatic maintenance - Doc. Insivumeh

In Merapi, on Java, the seismicity of the week from June 12 to 18 is marked by an increase in volcanic earthquakes.

The activity level remains at 2 / waspada, with a danger zone of 3 km of rayo around the summit. The potential dangers are currently constituted by possible pyroclastic flows of collapse of the lava dome and bursts of volcanic materials due to explosive eruptions. ⁣ On June 19, 2020 at 2:42 p.m. local time, an eruption was observed at Volcán Rincon de la Vieja, accompanied by an eruptive column about 1000 meters above the summit of the volcano, and projections of materials which could then be transported by the drainage with the next rains.