Dormant but not extinct volcanoes: The Eifel volcanic field and the volcanoes of the Roman province. 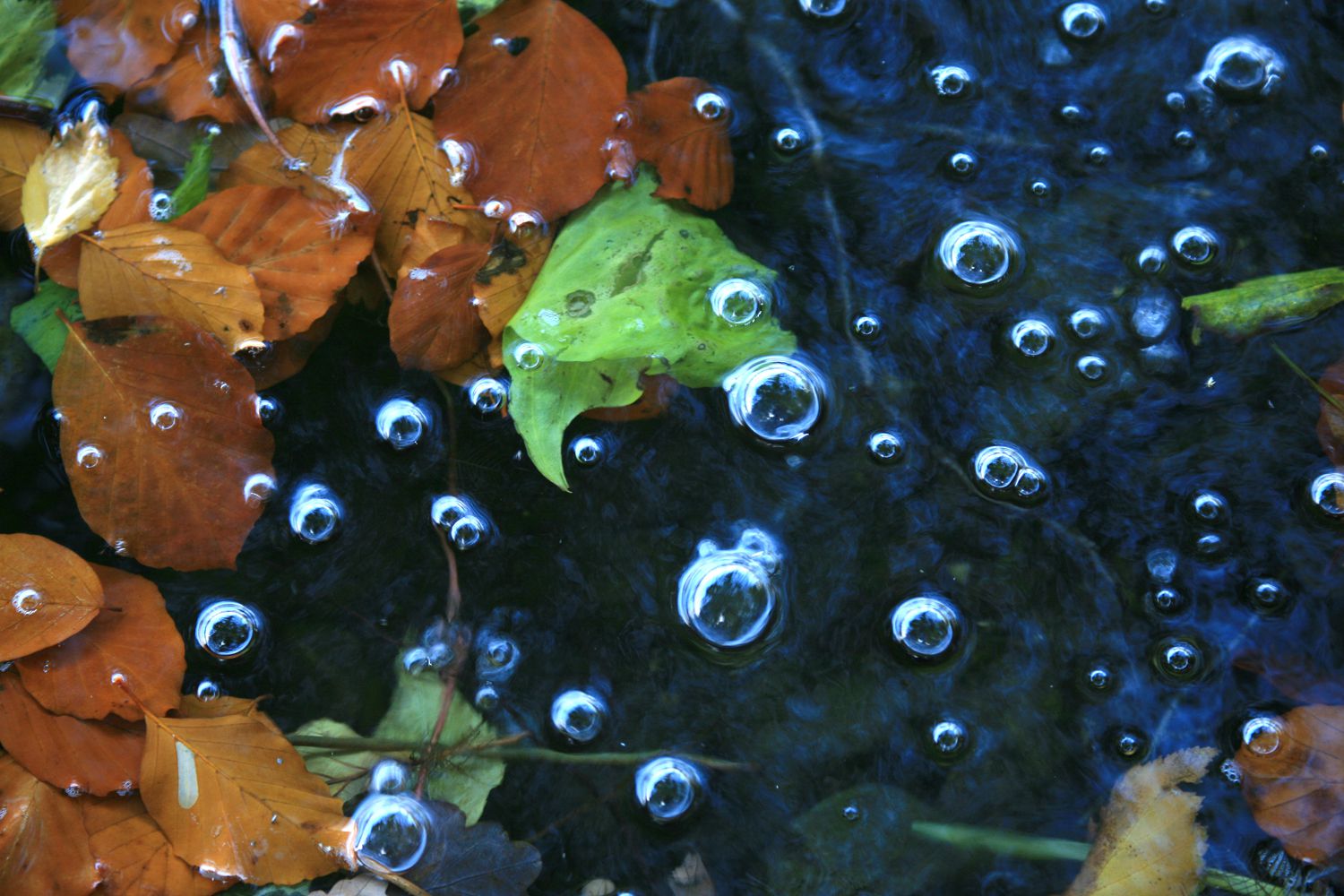 The hot spot under the Eifel still active !

Its last major eruptive manifestation dates back around 12,000 years and covered half of Europe with its ashes.

The team of C. Kreemer of the University of Reno in Nevada evaluated data from thousands of GPS measurements in the northwest of Europe, and found that the Eifel is the only area in which the basement moved much more than expected.

The remarkable overlap of significant uplift, horizontal extension and volcanism in the Eifel region strongly suggests a causal relationship with the suspected plume of the underlying mantle.

Based on the elevation data of the river terrace, the Rhenish massif is known to have risen since ∼700–800 ka (i.e. at the same time as the volcanism of the Quaternary Eifel started), with a maximum elevation between ∼140 m. and 250 m., centered on the Eifel region, where the highest uplift is observed.

Recently, it has also been found that low frequency seismic swarms occur in the lower crust below the Laacher See (Hensch et al. 2019). This activity has been interpreted as the vertical migration of magma or magmatic fluids. These results, when combined with those of the American study, as well as observations of continuous gas emissions, strongly suggest that the EVF / Eifel Volcanic Field is an active dynamic system.

Uprising and stretching of the basement in the Eifel area determined by GPS data. - note that the studied area includes the eastern part of Belgium, the Grand Duchy of Luxembourg and the Eifel in Germany -a) The colors are imaged VLM corrected for the GIA, the vectors are the main axes of the rate tensor of horizontal deformation (averaged over equal areas that do not overlap), the purple dotted line describes the area of ​​significant expansion rate (at level 2σ). Focal mechanisms of regional studies (Hinzen 2003; Camelbeeck et al. 2007), color-coded for implicit extension (red), contraction (blue) or strike-slip deformation (green). The blue dots are activity centers of the Quaternary EVF.

Monti Sabatini and Colli Albani: 2 sleeping volcanoes at the gates of Rome

INGV researchers, in collaboration with other researchers from La Sapienza University in Rome and the Geochronology Laboratory of the University of Wisconsin, analyzed the state of activity of the Lazio volcanic province. 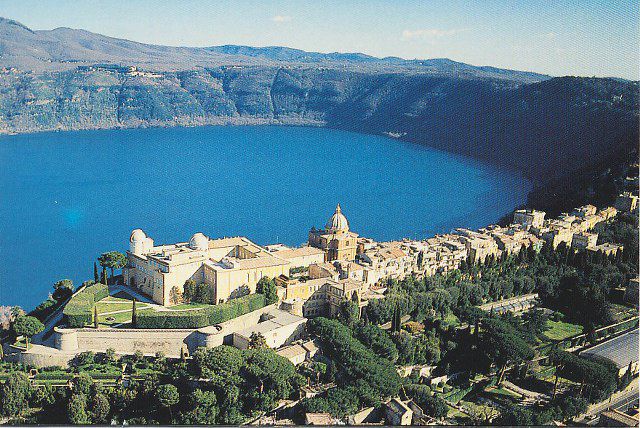 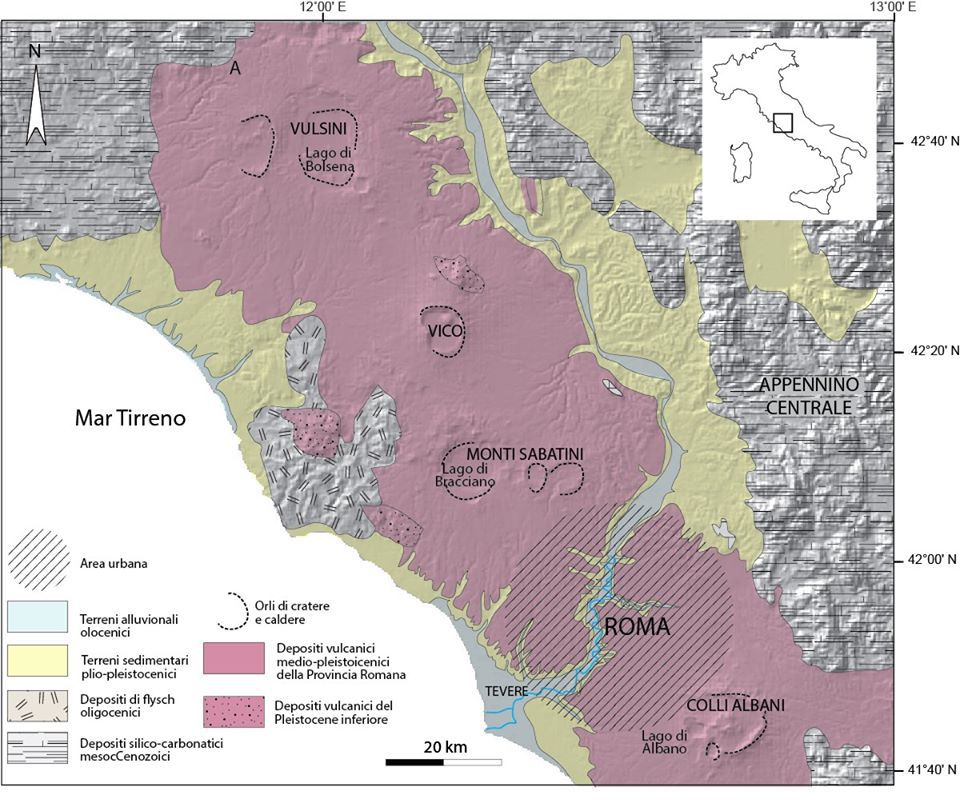 Geological map of the Roman volcanic Province (Lazio) and the area affected by the uprising for 125,000 years - Doc. F. Marra

The Monti Sabatini had a very similar and contemporary eruptive history to that of the Colli Albani, although with different mean recurrence times (more frequent eruptions occurred in the first district and rarer and concentrate those of the second in the time), so much so that they can be considered as two "sleeping twins" at the gates of Rome.

Although the analysis of the deformation of the ground and that of the local seismicity showed that the Sabatini mountains are in a state of almost absolute silence, very different from that shown in the Colli d'Albani, the times of recurrence / the time elapsed since the last eruption (70,000 years) is no longer than the average retirement periods, which divided the three major eruptive phases that occurred 600,000 years ago. It is actually about 61,000 years and about 57,000 years, respectively. Generally, a volcano is considered extinct when it has passed much longer than the average recurrence time since the last known eruption. But in the particular case of the Sabatini mountains, it seems more appropriate to consider the average time of the long dormant phases which separated the volcanic cycles characterized by a high eruptive frequency.

All the data collected in the study tells us that for the Monti Sabatini, as well as for the Colli Albani, the volcanic activity cannot be considered as extinct, and that the two districts are in a "dormant" state. 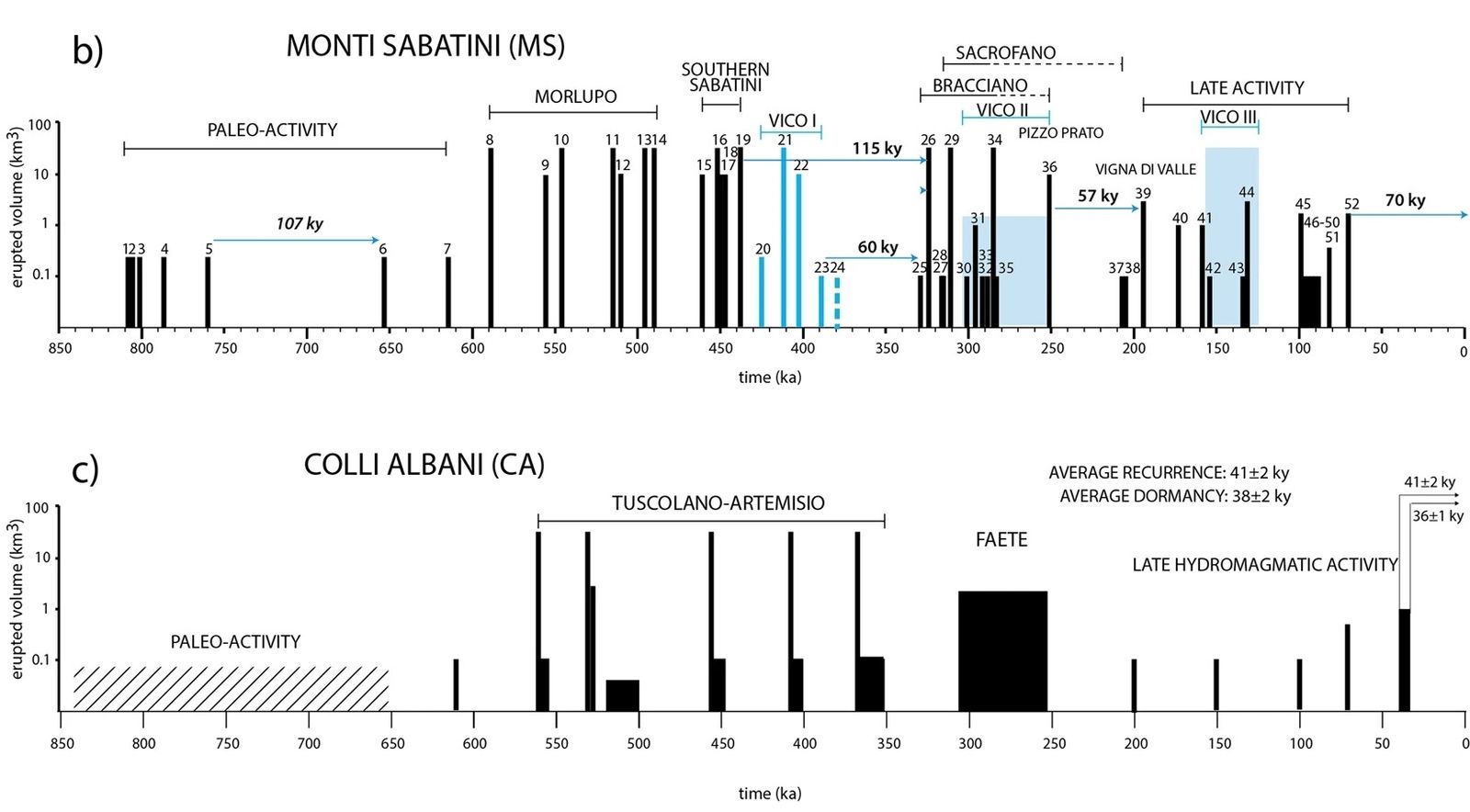 The eruptive stories of Monti Sabatini and Colli Albani over the past 800,000 years, based on more than 100 40 Ar / 39 Ar dates. The vertical bars represent individual dated eruptions. The rectangles represent the eruptive cycles. Their height is proportional, on a logarithmic scale, to the amount of magma erupting. In blue are reported the eruptions that occurred in the Vico district, which can be considered a "satellite" device compared to the Sabatini mountains. The major eruptive phases and, for the Sabatini, the main rest periods which separated the eruptive phases at high frequency (on the order of 10 000 years on average) are also indicated. Overview of the quaternary potassium co-magmatic Roman region suggesting a gradual extinction from NW to SE of eruptive activity in the volcanic districts of Lazio (depending on the age constraints available). Digital background elevation map (DEM) used with permission from the Istituto Nazionale di Geofisica e Vulcanologia, Rome.