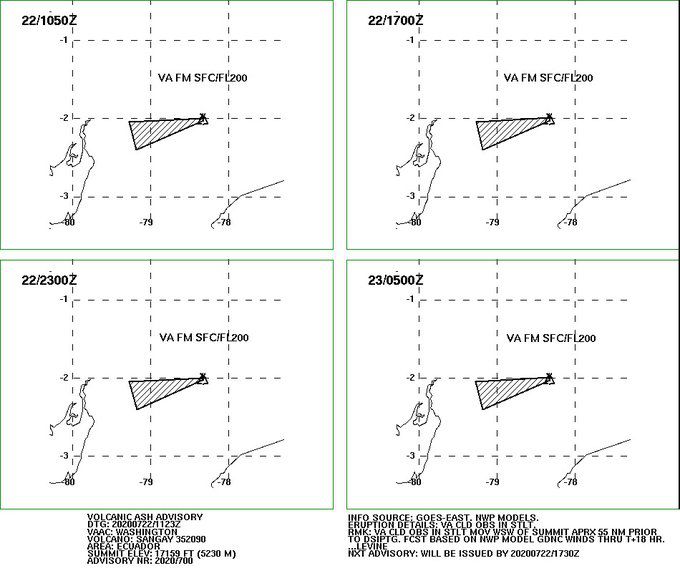 This July 22, satellite images allow us to distinguish a cloud of volcanic gas and ash coming from the Sangay volcano, heading west, which could potentially cause ash falls in part of the provinces of Chimborazo, Bolivar, Guayas and Cañar. Current winds favor the distribution of these volcanic products. This phenomenon was persistent during the eruptive period which began in May 2019. It is recommended to take the appropriate measures. During the last 24 hours, thanks to the monitoring system of the Popocatépetl volcano, 46 ​​exhalations have been identified, accompanied by volcanic gases and sometimes small amounts of ash. In addition, 101 minutes of low amplitude tremor were counted.

From 7:59 am and at the time of this report, we observe a constant emission of water vapor, gas and light quantities of ash dispersed towards the west-southwest. Activity on the Asama / Honshu volcano has increased in recent weeks, associated with fluctuating seismicity.

The Japan Meteorological Agency (JMA) reported that the vapor and gas plume rose 400m above the summit on July 22.

A rash could occur without warning.

The warning bulletin states that ballistic impacts from volcanic bombs and pyroclastic flows could affect an area approximately 2 km away from the main crater. At 1:17 am on the 23rd, an eruption occurred at Suwanosejima (Mitake crater), and the plume rose to 1100m above the crater rim.

Volcanic ash is flowing from the crater to the northeast, and a large amount of ash fell in the village of Toshima within an hour.