The GSI has uploaded the SAR intensity images of the Daichi-2 satellite taken of Nishinoshima between July 31 and August 14, 2020.

The interference zones are considerably reduced over almost the entire surface of the island, covered with ash.

The image taken on August 14 shows an expansion of the pyroclastic cone crater.

This August 15, gas and ash emissions continue, with the emission of a plume in a southwesterly direction, dissipating in a western sector. The National Institute of Geophysics and Volcanology announces that on the morning of August 14, an increase in Strombolian activity is observed at the NSEC / New south-eastern crater (saddle cone) of Etna; it fuels an ash emission which generates a dark plume of ash dispersed by the wind in a south-southeast direction and with ash falls in the region of Pedara, Trecastagni and Viagrande.

The plume height reaches between 700 and 1,200 meters above the summit, justifying the passage of the aviation code from orange to red.

The fall of coarse pyroclastic material on the sides of the NSEC cone is reported by ground crews. This explosive activity is characterized by persistence and fluctuation in intensity and is associated with modest ash emissions.

From a seismic point of view, the amplitude of the tremor shows variations in the range of average values ​​and, sometimes, in that of high values. The location of the source of the quake is confined to the area of ​​the new south-eastern crater, at an altitude of 2900-3000 m above sea level. From an infrasound point of view, no significant activity is reported.

From the observation of the parameters relating to the deformations of the ground, no significant change was detected.

The activity of Sinabung, in level 3 / siaga, continues with five eruptive episodes reported on August 14, 2020 by Magma Indonesia:

- Friday August 14, 2020 at 10:30 am WIB, with an ash plume observed at ± 2100 m above the summit (± 4560 m above sea level). The ash column was gray with moderate intensity to the southeast and south. This eruption was recorded on a seismograph with a maximum amplitude of 64 mm and a duration of 100 seconds.

- Friday August 14, 2020 at 2:55 p.m. WIB. No visual observations were made. This eruption was recorded on a seismograph with a maximum amplitude of 90 mm and a duration of 62 seconds - Friday August 14, 2020 at 4:56 p.m. WIB with an ash plume observed ± 4200 m above the summit (± 6660 m above sea level). We observe that the ash column is gray to brown in color with a thick intensity towards the east. This eruption was recorded on a seismograph with a maximum amplitude of 40 mm and a duration of 580 seconds.

- Friday August 14, 2020 at 11:00 p.m. WIB with the observed height of the ash column ± 1000 m above the summit (± 3460 m above sea level). The ash column was observed to be gray with moderate to thick intensity towards the south. This eruption was recorded on a seismograph with a maximum amplitude of 88 mm and a duration of 387 seconds.

Note that on the images of the last two episodes, we can see small pyroclastic flows. During the last 24 hours, 36 exhalations have been identified with Popocatépetl, some accompanied by volcanic gases and sometimes small amounts of ash.

In addition, 189 minutes of low amplitude tremor were recorded, most of it since a tremor episode that began on August 14 at 7:25 a.m., accompanied by an emission of ash from a height of 600 m above. above the crater; the ash emission then continued.

Ash falls are possible in my municipalities of Amecameca, Chalco, Atlautla, Ozumba, Cocotitlan and Tlalmanalco.

During the night, the volcano was partially visible, and a constant emission of volcanic gases and an incandescence above the crater could be observed. 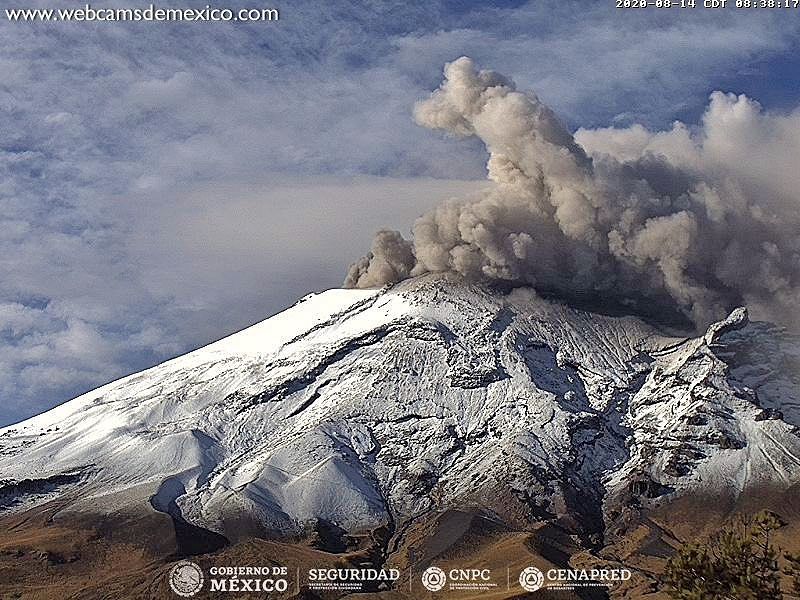