News From Sabancaya, Novarupta-Katmai and La Soufrière of Guadeloupe. The Geophysical Institute of Peru (IGP) reports that between September 7 and 13, 2020, the eruptive activity of the Sabancaya volcano continues at moderate levels, with the continuous recording of explosions - 38 explosions / day on average - with columns of gas and ash rising up to 3.5 km above the summit of the volcano, scattered towards the southern, southeast and eastern sectors of Sabancaya

The IGP recorded and analyzed the occurrence of 2024 earthquakes of volcanic origin associated with the circulation of magmatic fluids in the Sabancaya.

During this period, the Volcano-Tectonic (VT) earthquakes presented magnitudes between M2.1 and M3.3 and were located mainly in the northwest area of ​​Sabancaya. The representative earthquake (M3.3) was recorded on September 9 at 5.13 a.m., 13 km northwest of Sabancaya and at a depth of 10 km.

Monitoring the deformation of the volcanic structure, using GNSS equipment and data (processed with fast orbits), recorded slight inflation on the southeast flank of the Sabancaya volcano and the northern sector of Hualca Hualca .

Ten thermal anomalies with values ​​between 2 MW and 22 MW, associated with the presence of a lava body (dome) on the surface of the volcano's crater were observed by satellite.

The volcanic alert level remains at orange, with an inaccessible zone of 12 km in radius. 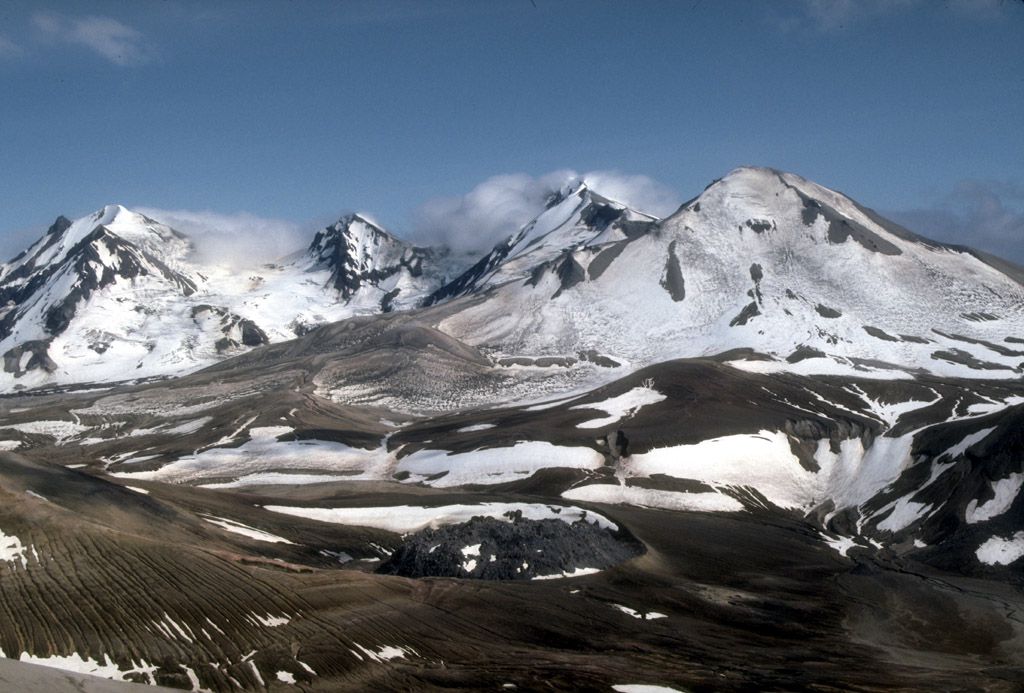 The Trident volcano and the dome of the Novarupta - photo G.Mc Gimsey / AVO

Strong southerly winds near Katmai and the Valley of Ten Thousand Smokes resuspended volcanic ashes from the Novarupta-Katmai eruption of 1912 and carried it north today. The ash cloud was observed by a local pilot flying near Camp Brooks and Lake Naknek in the Alaska Peninsula at ~ 6:25 p.m. AKDT on September 14 (September 15 at 2:25 a.m. UTC) and continues to move . The height of the resuspended ash clouds is unknown, but the National Weather Service suggests it could be up to 4,000 feet above sea level. Cloudy conditions precluded satellite observations.

This phenomenon is not the result of recent volcanic activity and occurs during periods of high winds and dry snowless conditions in the Katmai region and other young volcanic regions of Alaska. No eruption is in progress. All the volcanoes in the Katmai region (Snowy, Griggs, Katmai, Novarupta, Trident, Mageik, Martin) remain in the GREEN color code.

Resuspended volcanic ash should be considered hazardous and could be harmful to aviation and health. During the month of July the volcanological observatory of Guadeloupe recorded 366 earthquakes of volcanic origin, located mainly under and around the dome of La Soufrière, between ~ 0.1 and 1.1 km deep under the summit. 365 earthquakes are of volcano-tectonic type (called VT); 1 earthquake is of the long-period (called LP) or low frequency type. A large proportion of VT earthquakes have an LP component in the coda of the signals which is diagnostic of their “hybrid” type behavior. This behavior characterizes fracturing processes generated by the migration of fluids in the volcano.

The sequence of volcanic earthquakes that began on Saturday September 12, 2020 at 7.20 a.m. local time in the La Soufrière area continues with 146 recorded earthquakes of very low magnitude (M <1), recorded by the OVSG.

Based on the OVSG-IPGP observations recorded during the month of July 2020, and in accordance with the provisions planned by the authorities, the volcanic alert level remains at Vigilance / yellow.

The likelihood of short-term eruptive activity remains low. However, given the resurgence of seismic and fumarolic activity, recorded since February 2018, a change in the volcano's regime has been observed such that an intensification of the phenomena in the future cannot be excluded. Consequently, the OVSG-IPGP is in a state of heightened vigilance.

The gaseous emanations near and downwind of the main fumaroles at the summit (in particular the South Crater, the Tarissan, and the 1956 Gouffre) have, since 1998, been at proven risks of irritation and burns (eyes, skin, respiratory tract). .