In addition to the intense degassing and condensation observed on October 4, 2020 at sunrise in Villarica (a meteorological phenomenon linked to volcanic activity), the Sernageomin reported a large period earthquake (LP) associated with an explosion that occurred today Today at 11:30 am local time, with one move. reduced by 14 cm².

The explosion, in turn, developed a plume, with a particle charge, with a height of more than 450 m above the crater, which was dispersed to the northeast. This activity is similar to that previously recorded as part of the yellow alert. 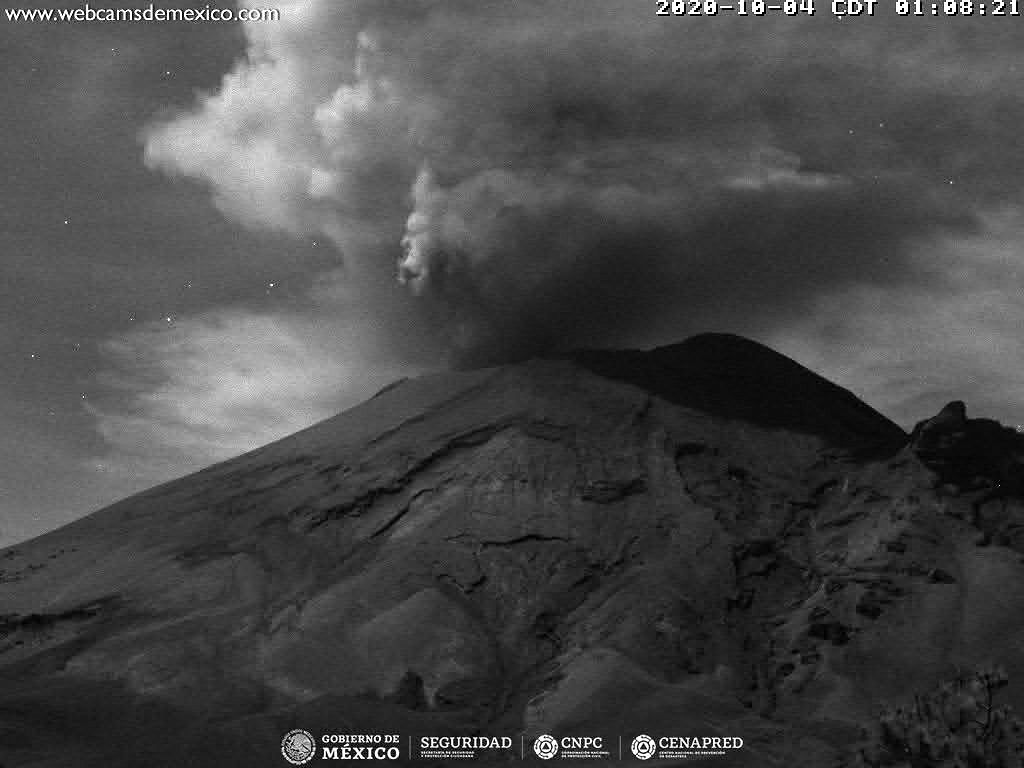 During the last 24 hours (as of October 4 / 11h00 local), thanks to the monitoring system of the Popocatépetl volcano, 105 exhalations accompanied by volcanic gases and sometimes small amounts of ash have been identified. In addition, 500 minutes of tremor were recorded.

During the night and today in the morning, emissions of water vapor, gas and ash were observed towards the north-west. Seismic activity is still recorded under the Piton de la Fournaise (summit area and east flank) even if it continues to decrease. Thus for the day of 04/10/2020, 16 volcano-tectonic earthquakes deep under the East flank, 1 earthquake classified as "undetermined" (because of low magnitude) and 16 landslides / shallow collapses in the sector of the East flank, were manually pointed. No superficial summit volcano-tectonic earthquake has been recorded. 72 events of smaller amplitudes and not visible to operators were detected and relocated automatically. Piton de La Fournaise - Location map (epicenters) and north-south and east-west sections (showing the location in depth, hypocenters) of the earthquakes recorded and located by the OVPF-IPGP between 09/26/2020 and 04/04 / 10/2020 under the Piton de la Fournaise massif. Only localizable earthquakes have been shown on the map (© OVPF-IPGP).

During the day of 04/10/2020, no large-scale deformation occurred in the Grandes Pentes sector. But over the last 3 days, the shift towards the east of the GPS station "GPNG" of the OVPF, located in the upper part of the Grandes Pentes at an altitude of 1,414 m, continued by approximately 1.2 cm. . At the same time, the inflation (swelling) of the summit zone continues, testifying to the pressurization of a source under the summit, where the superficial supply system is located (magmatic reservoir from which the instrusion of magma leaves towards the top. area). This resumption of inflation is consistent with the CO2 concentrations in the soil, which have been increasing in the far field (Plaine des Cafres sector) for several days. This increase is often associated with a rise of magma from the mantle.

Following discussions between the OVPF and the prefecture, it was decided to maintain the alert level at "Alert 1" given the unusual nature of the situation and the uncertainties that remain. Indeed, the persistence of seismicity and weak deformations under the eastern flank show that the intrusion of magma under this flank is still active and that an eruption cannot be excluded under this zone. The inflation of the summit area and the increase in CO2 concentrations in the soil in recent days show that a new magmatic injection from the summit reservoir cannot be excluded. This could happen quickly following the weakening and opening of the volcano's power system during the intrusion of September 28-29. The observatory teams remain mobilized.