This Friday, October 2, 2020, at 5:40 a.m., an explosive, hydrothermal-type eruptive episode was recorded at the active crater of the Rincón de la Vieja volcano, with a plume height of about 800 m above the edge of the crater. , or 4,140 meters asl. It lasted 2 minutes.

The event was also reported by the inhabitants of Curubandé and Gavilán. It is not excluded that the material expelled by the eruption was deposited in the basin of the rivers located to the north of the volcano, precautions are therefore required because of the sudden floods of these channels.

This volcano has clearly been a matter of concern since the start of the year. 144 events of smaller amplitudes and not visible to operators were detected and automatically relocated. Piton de La Fournaise - in the foreground, the Dolomie and Bory craters, further, the rampart of Bellecombe and in the background, the summit of Piton des Neiges - photo © Bernard Duyck 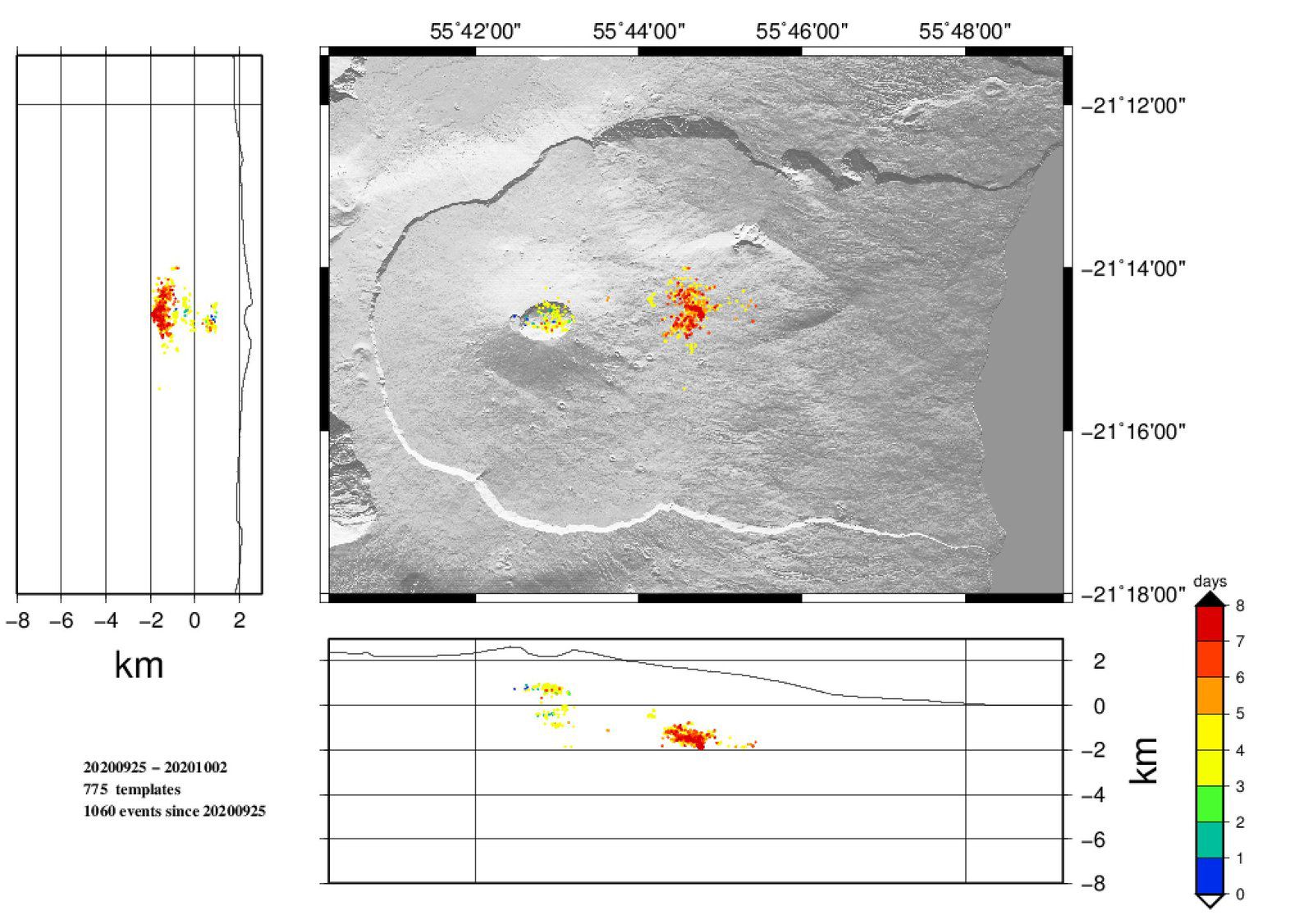 During the day of 01/10/2020, the deformations continued on the eastern flank of the volcano but at a lower rate than the previous days, as well as the OVPF GPS station "GPNG" located in the upper part. des Grandes Pentes, at an altitude of 1,414 m, has continued its eastward slide of 3 cm, or about 73 cm in total since the start of the crisis, and has risen by about 26 cm since the start of crisis.

The CO2 concentrations in the soil are increasing in the far field (Plaine des Cafres sector), this increase is often associated with a rise of magma from the mantle level.

The persistence of seismicity and deformation under the eastern flank shows that the intrusion of magma towards the eastern flank is still active and that an eruption cannot be excluded. The observatory teams remain mobilized.

During the day of 02/10/2020, no significant deformation occurred in the Grandes Pentes sector. On the other hand, the inflation (swelling) of the summit zone has resumed, testifying to the pressurization of a source under the summit, where the superficial supply system is located (magmatic reservoir from which the instrusion of magma to the surface). This resumption of inflation is consistent with the increase in CO2 concentrations in the soil, which are increasing in the far field (Plaine des Cafres sector). This increase is often associated with a rise of magma from the mantle.

Find all the information relating to the activity of Piton de la Fournaise on the various media of the OVPF-IPGP:
- the website (http://www.ipgp.fr/fr/ovpf/actualites-ovpf),
- the Twitter account (https://twitter.com/obsfournaise?lang=fr),

A sequence of volcanic earthquakes began on September 29, 2020 at 5:33 am local time in the area of the La Soufrière of Guadeloupe. On October 2, the OVSG networks recorded 228 earthquakes of M <1, not felt; the hypocenter is located 2.5 km under the dome of La Soufrière.
The alert level remains at yellow / vigilance.