The hydrothermal explosive activity continues in Rincon de la Vieja, with a few episodes on October 5 and 6 reported by the Ovsicori.

On October 5 at 12:39 am local time, an episode was accompanied by a plume reaching about 500 meters above the active crater.

Also on October 5 at 7:27 p.m. local time, another episode occurred lasting one minute, without determining the height of the plume due to the darkness.

This October 6 at 5:31 UTC, an eruptive episode began ... without specifying the Ovsicori. Today, Monday 05 October at 13:43 and 13:47 local time (16:43 and 16:47 UTC), the monitoring stations installed near the Villarrica volcano recorded two earthquakes of long period (LP) associated with moderate explosions at the level of the active crater, the largest of them with a reduced displacement (DR) equal to 35 cm2.

First, a greyish column with input of particles is observed in both events. The column of the most energetic event recorded a height of 400 m. At the time of publication of this report, there is no significant change in seismic activity, it continues at levels similar to those observed before the reported event. The volcanic technical alert remains at Yellow. The Sinabung volcano (2460 m above sea level) has been erupting since 2013. The last eruption occurred on September 5, 2020, causing a column of gray eruption reaching 800 meters above the summit.

The main crater emits a thick white plume about 50 to 300 meters from the summit.

The public and visitors / tourists should not carry out activities in the villages that have been relocated, as well as within a radial radius of 3 km from the summit of G. Sinabung, and a sector radius of 5 km for the southern sector. east and 4 km for the east-north sector. iton de La Fournaise - Illustration of the deformation over 2 months, as of 06.10.2020. The baselines (variation of distance between two GPS receivers) crossing the Piton de la Fournaise building, at the top (top), the base of the terminal cone (in the middle) and in the far field (bottom) are shown here. ). An increase is synonymous with elongation and therefore swelling of the volcano; conversely, a decrease is synonymous with contraction and therefore deflation of the volcano. The possible periods colored in light pink correspond to the eruptions. - Doc. OVPF

Seismic activity is down at Piton de la Fournaise, but continues. Inflation and an increase in CO2 concentrations are also recorded. An eruption or a new intrusion cannot be excluded.

As of October 5, the bulletin reported 19 landslides at the summit cone and in the enclosure, and 19 volcano-tectonic earthquakes, the strongest of M0.68 and lasting 5.96 sec.

The GPS of the summit area record inflation, witnessing the pressurization of a surface source.

The monthly activity bulletin in September is accessible via: http://www.ipgp.fr/fr/ovpf/bulletin-mensuel-lundi-5-october-2020 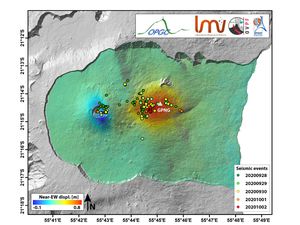 Piton de La Fournaise - Vertical displacement maps (left) and east-west (right) deduced from InSAR data related to the 09/28/2020 intrusion. The intensity of the movements is given by the colored bar. The colored dots represent the location of the seismicity according to the date and the white triangle the GNSS station of the OVPF "GPNG" (© OVPF-IPGP and © LMV-OPGC). - one click to enlarge