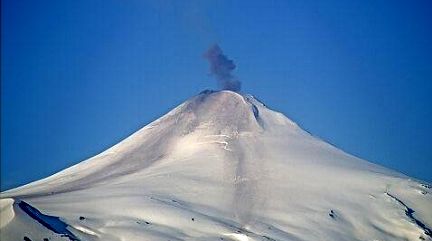 The Sernageomin recorded two LP earthquakes in Villarica, associated with moderate explosions at the level of the active crater, this October 15 at 5:34 am local, accompanied by incandescence, and a gray plume and at 8:04 am local, accompanied by a gray plume with particulate material. Displacements have been reduced, respectively by 111 cm² and 5.5 cm². At the surface, the plumes did not exceed 450 meters, and dispersed to the east. They have slightly grayed out the white cover of the volcano. The effusive activity is characterized by the extrusion of lava which accumulates in the crater and which overflows, forming a lava flow approximately 615 meters long on the north side.

The explosive activity does not produce plumes greater than 1,500 meters, with a majority gas content. Some episodes show a content of reddish pyroclasts.

The lava dome is increasing slightly, according to satellite measurements.

Night-time incandescence is observed when the weather permits. During the previous week, the deformation and seismicity ratios of Mauna Loa on the island of Hawaii do not show any significant change, but remain above baseline levels observed over the long term.

Seismometers recorded 80 small earthquakes of magnitude less than 2.5 below the summit and upper flanks; the majority of earthquakes occurred at a depth of less than 8 km.

A slight inflation is always present, corresponding to a magmatic input to the shallow storage system.

Gas concentrations and fumarole temperature remain stable for the summit and Sulfur cone in the southwest rift zone.

The alerts remain identical: Advisory and Yellow, without eruption. Øystein Lund Andersen mentions a drone observation of the Bromo, in the Tengger / East Java caldera, on October 15, which reveals differences in the color of the waters of the crater between 2019 and October 15, 2020; its color has changed from grayish to green, probably under the effect of volcanic gases. There is no indication of the water level in the crater.

The PVMBG reports a continuous tremor, with a dominant amplitude of 1 mm for this October 15.

The activity level is 2 / waspada.