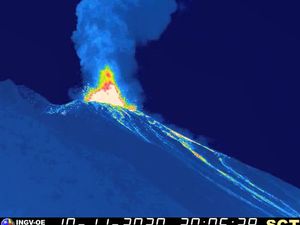 The event lasted about 6 minutes and produced an eruption column that rose higher than the Pizzo [sopra la Fossa]. The products of the explosion were mainly distributed on the Sciara del Fuoco and caused a turnover of pyroclastic products, while a small proportion fell on the Pizzo sopra la Fossa. The event lasted until 20:10:00 UTC, with at least three explosions of minor intensity than the Big Blast. In terms of seismicity, the event, which was visible on all seismic stations in Stromboli, was characterized by a sequence of explosive events that started at 20:03.50 (UTC).

Surveillance networks indicate that at 11:11 p.m. local time (22:11 UTC), the parameters of the eruptive activity returned to normal levels.

The LGS specifies that the seismic event (3.5 x10-4 m / s in speed and 0.38 x10-4 m in displacement) exceeds the values ​​of ordinary activity by more than an order of magnitude.

The infrastructure network indicates that the explosion caused pressures around 220 Pa, at 450 m and located the explosive event in the area of ​​the Central / SW crater.

This event was accompanied by a strong signal of soil deformation (1 mrad in the Rina Grande on the OHO tiltmeter) preceded by approximately 4 minutes by net inflation of the soil.

This Tuesday, November 10 at 3.14 p.m. local time, the Sernageomin OVDAS recorded an expulsion of particulate material in Villarica; this episode was associated with continuous tremor and an eruptive column of 320 m. of height, with dispersion towards the SSO.

During the day, other explosions were recorded, of lesser magnitude. Evolution of villarica - Doc. Volcanologia Chile - one click to enlarge

Volcanologia Chile explains the behavior of Villarica with an infographic document :

- Usual state: the volcano has a conduit filled with magma, with persistent degassing and small explosions.

- Recent state: The deepening of the lava lake increases the instability of the duct and the walls of the crater. Landslides occur and the material falling on the lava surface (ice and rocks) increases the intensity and frequency of explosions.

- Current state: A new ascent of the lava lake makes it easier to observe Strombolian explosions, and there is also a greater incandescence. These cycles are recurrent in the Villarrica volcano, and mainly affect the area surrounding the crater. Thanks to seismographic recordings of November 10, 2020, it was recorded: Insivumeh communicates this November 10 a Sentinel-2 photo of a lava flow in Pacaya, 1,200 meters long in the direction of WSW.

The seismic stations recorded the tremor linked to the rise of the mama and to a constant degassing.

Strombolian explosions are recorded, but not observed, as the region is subject to bad weather conditions from Tropical Storm Theta.