Back to the two volcanoes that erupted yesterday, with explanations from the respective observatories: Kilauea and HVO / USGS & Etna and INGV OE.

At 07:48 UTC on December 21, the early warning system recorded an increase in infrasound parameters and seismic tremors associated with strong explosive activity in the summit craters of Etna.

From 09:08 UTC, a strong intensification of the strombolian activity of the SE crater. However, weather conditions do not allow continuous observation of the activity.

From a seismic point of view, the average amplitude of the volcanic tremor shows high values ​​in the SE Crater area. The infrasound activity is also quite strong. 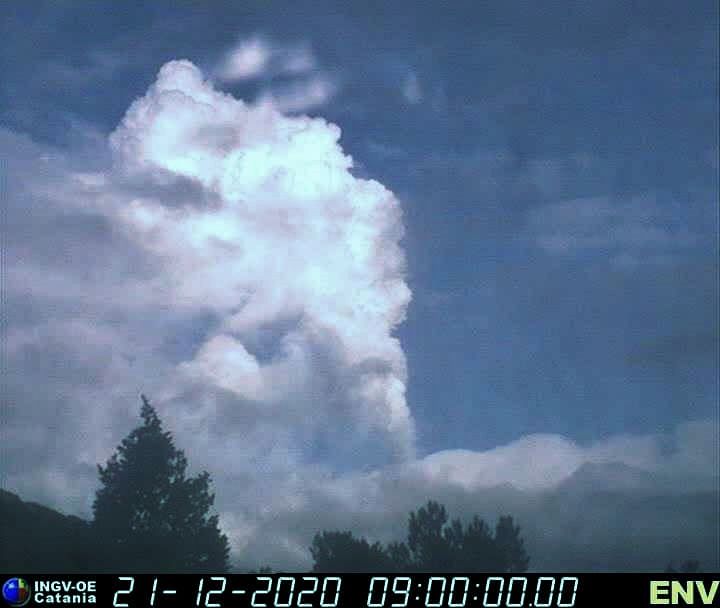 The activity affects at least two of the CSE's vents at the same time, rapidly evolving into a lava fountain a few minutes later. The activity of the lava fountains by the CSE, reported by the INGV in the 10:26 press release, seems to be essentially exhausted.

From 11:03 UTC, following a very brief improvement in the visibility conditions, it is possible to observe an emission of lava from the landslide slot that opened on the southwest side of the South Crater. is during paroxysmal activity on the evening of December 13. The lava emission forms a flow towards the west.

The average amplitude of the volcanic tremor shows a sudden and significant decrease, to fall back around 10:30 UTC in the range of values ​​lower than those which marked the eruptive phenomenon in the previous hours.

The soil deformation monitoring networks show a progressive attenuation of the deformations on the clinometers of the high and medium altitude stations from 10:00 a.m. to 10:30 a.m. During the afternoon, the south-eastern crater becomes visible and we observe a lava flow towards the wall of the del Bove Valley; other flows descended on the north south-eastern flank. On December 22, from 02:50 GMT, a sharp increase in Strombolian activity in at least two mouths of the SE crater is observed which, from around 03:15 UTC, is feeding a lava overflow from the landslide slot open on the southwest flank of the southeast crater during the paroxysmal activity of December 13. The lava emission forms a small lava flow towards the west which overlaps the cooling lava field of December 21, 2020. From the images of the thermal cameras, it is also observed that the lava flow directly in the Valle del Bove is no longer powered and cools down.

From the seismic point of view, from 01:30 UTC, a clear increase is observed in the average amplitude of the volcanic tremor which is located at high values. The location of the center of gravity of the tremor sources is located in the area of ​​the SE crater. The infrasound activity is quite strong

At 03:20 UTC, the ground deformation monitoring networks show little variation in the clinometric signals at the summit stations. 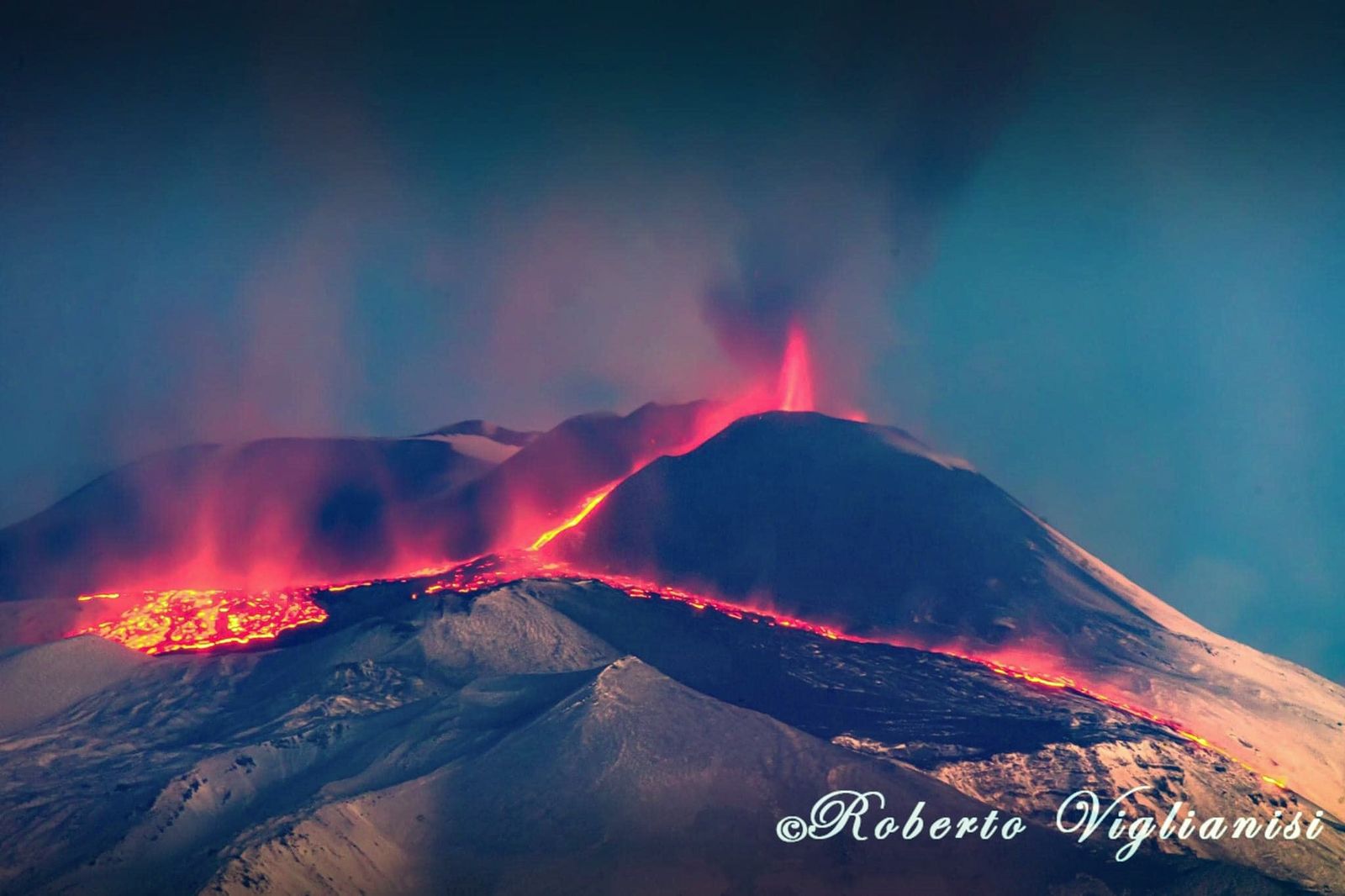 From 04:19 UTC the Strombolian activity described above suddenly evolved into a lava fountain. The activity feeds two distinct lava flows: one heads southwest and branches west and east of Monte Frumento Supino; the second goes east, inside the Valle del Bove.

At present, the mean amplitude value of the volcanic tremor remains at a high level. The location of the center of gravity of the sources of tremors is always located in the area of ​​the SE crater. Infrasound activity continues to be strong.

The soil deformation monitoring networks show a weakening of the variation of the clinometric signals at the summit stations. Feedback on the eruption at the Halema'uma'u crater of Kilauea with the HVO:

A swarm of earthquakes below the summit of Kīlauea began around 8:30 p.m. HST on the evening of December 20, accompanied by ground deformation detected by inclinometers.

A bright glow and vigorous plume of steam, generated by the boiling water lake at Halemaʻumaʻu, was then observed on HVO webcams from around 9:30 pm. HST. HVO scientists responded immediately and visually confirmed from the field that lava was visible at Halema'uma'u. The vapor plume dissipated shortly thereafter. Activity over the past ten hours has been characterized by three fissure vents on the north and northwest walls of Halema'uma'u Crater.

The lava fountain at these vents is estimated to measure up to 25m. height; the vents feed the lava flows into the base of Halema'uma'u Crater, which is being filled with a growing lava lake.

No major changes at 4:09 am HST on December 21, 2020. The fountain on the north inner wall of Halema'uma'u crater is dominant, with a weaker fountain emitted from the cracks to the west. The lava lake continues to rise and grow slowly and began to flood the base of the fallen blocks in the Kīlauea caldera during the summit collapse events of 2018. The gas plume continues to ripple and drift to south-west. 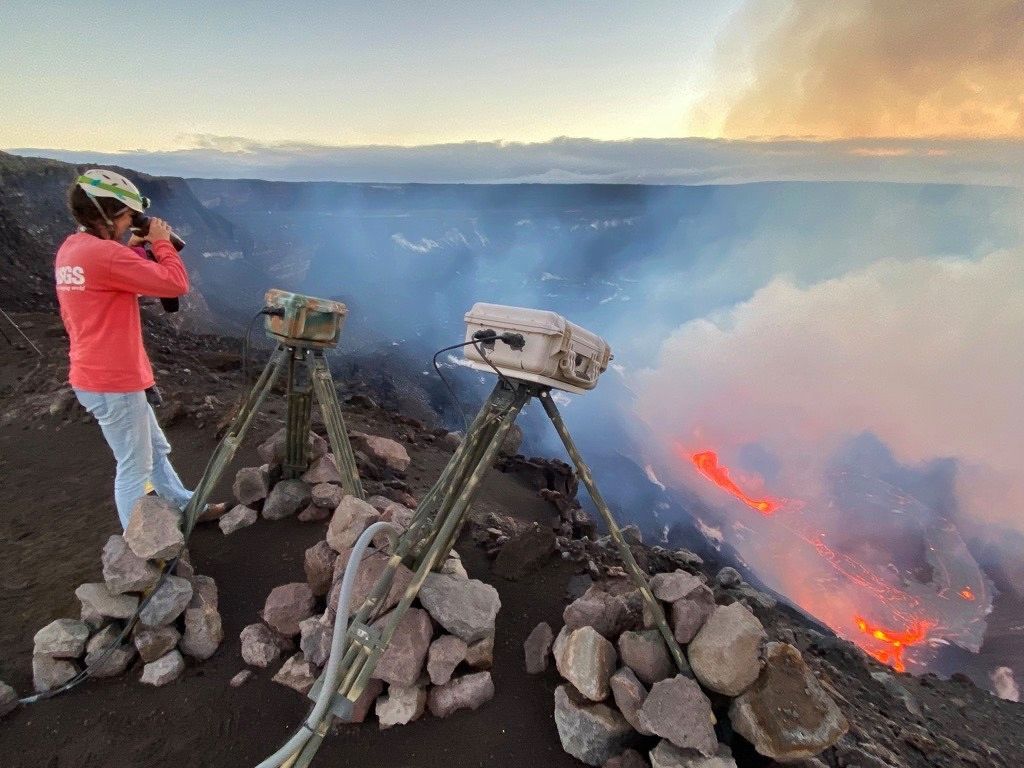 Kiluauea - Halema'um'u eruption on 21.12.2020 at dawn under the supervision of volcanologists - Doc. USGS The lava lake has risen at about several meters per hour since the eruption began. The current lava lake has a circulating perimeter, but a stagnant center.

The event was accompanied by only moderate amounts of warping, indicating the deflation of a magma reservoir beneath Halema’uma’u. The tilt rates have decreased slightly since the onset of the eruption.

The eruption is currently confined to the Halemaʻumaʻu crater.

The HVO has reduced Kīlauea volcano's alert level to WATCH and its aviation color code to ORANGE, reflecting the less dangerous nature of the ongoing eruption.

It is not known how long the current rash will continue. Eruptions at the top of Kīlauea over the past 200 years have lasted from less than a day to over a decade. HVO continues to closely monitor ongoing eruption and all aspects of the volcano