No significant change at the summit crater of Kilauea : lava activity remains confined to Halemaʻumaʻu from two vents on the north and northwest sides of the crater. At 7 a.m. on December 25, the growing crater lake was 176 m (577 feet) deep. The high SO2 emissions continued.

Two vents continued to erupt on the north and northwest walls of Halemaʻumaʻu. The west vent, located on the lowest block of Halemaʻumaʻu Crater, splashed intermittently. The north vent remains the most vigorous and is slowly flooded by the rise of the lake. The vents continued to supply lava to a rapidly expanding lake filling Halema'uma'u Crater. As of early Christmas morning, the lake was 176m deep - an increase of 6m from the previous 24 hours. The volume of the lava lake on the morning of December 25 was approximately 21 million cubic meters.

A colder, solidified lava island in the lava lake has become smaller and is slowly drifting northeast into the lake. It is approximately 260m in length and 115m in width according to the heat map of December 23.

Sulfur dioxide emission rates remain high, estimated at around 35,000 to 40,000 tonnes / day, measured on Monday (December 21) and revised on Wednesday (December 23). Seismicity remained high but stable, with a few minor earthquakes and fluctuations in tremor related to the strength of the fissure fountain. Sentinel-2 L1C provides us with images before and after eruption; depicting the passage from the water-filled lake to the growing lava lake.

The alert level remains at Watch and the aviation code at orange. 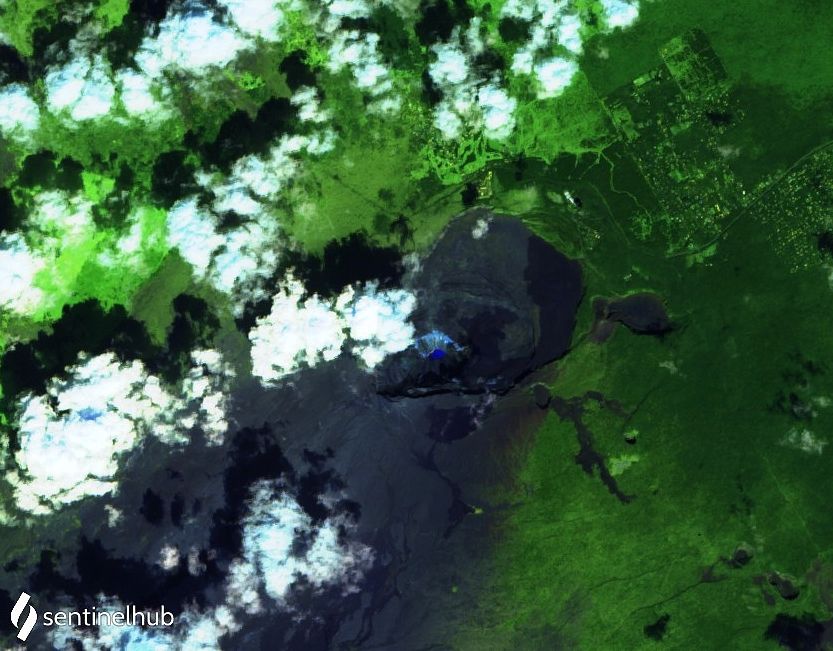 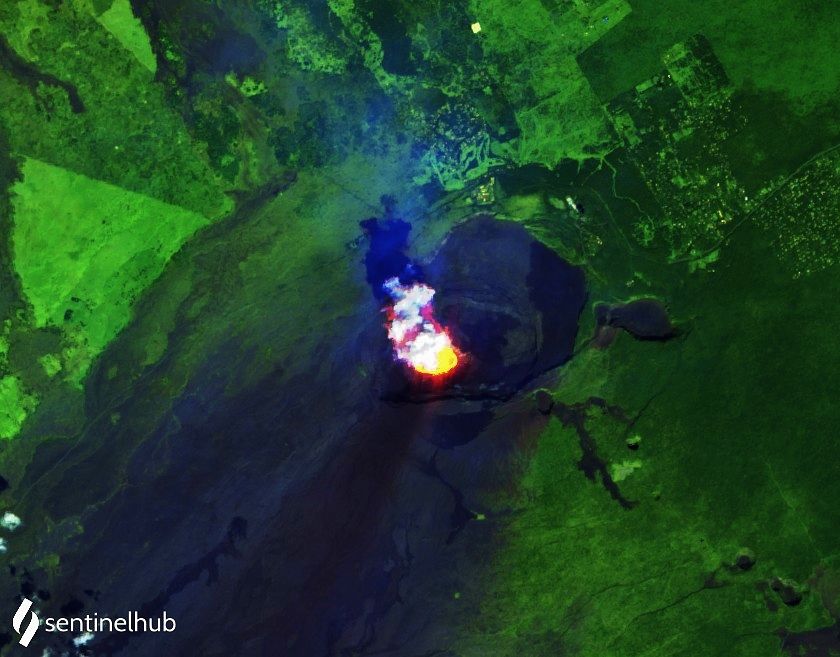 The island of Hawaii and its volcanoes (hot spot at Kilauea summit) on 12/23/2020 and zoom on the crater of Halema'uma'u, with its growing lava lake, topped by a plume of gas and ash (and its shadow) - image Sentinel-2 L1C bands 12,11,4 - one click to enlarge

In Klyuchevskoy, the effusive-explosive eruption continues, with this December 25 at the end of the day an ash plume reaching 6,000 meters asl. before drifting for 60 km. Towards the northeast of the volcano. SERNAGEOMIN reported that a notable change in seismicity at Cerro Hudson was characterized by an increase in the frequency and amplitude of volcano-tectonic (VT), hybrid (HB) and long period (LP) signals from 1 to December 15. Two swarms of VT earthquakes were recorded from December 10 to 11, the largest event, a local M 2.9, located 4.7 km east of the center of the caldera at a depth of 4.6 km.

The locations of the earthquakes suggested a relatively shallow source southeast of the caldera.

No deformation or modification of the surface was observed.

Although other volcanic parameters are always considered normal values, the occurrence of the aforementioned seismic activity allows us to deduce a greater dynamics inside the volcanic conduits.

The alert level was increased in Amarilla (second highest level on a four-color scale) on December 22, based on the increase in seismicity.

ONEMI warned the communities of Aysén and Río Ibáñez, declaring a status of "preventive early warning", a level between green and yellow.