At Merapi, this January 26, the day was marked by:

- 13 earthquakes accompanying as many pyroclastic flows of collapse, with a seismogram of an amplitude of 25 to 60 mm and a duration of 104.1 to 163 seconds, and a displacement distance of 1,000-1,500 meters towards the southwest and a co-pyroclastic cloud 400 meters above the summit. The activity continues on January 27, between midnight and 12 noon local, with:

- 21 earthquakes accompanying pyroclastic flows, with an amplitude of 20 to 60 mm and an earthquake duration of 83 to 197 seconds. 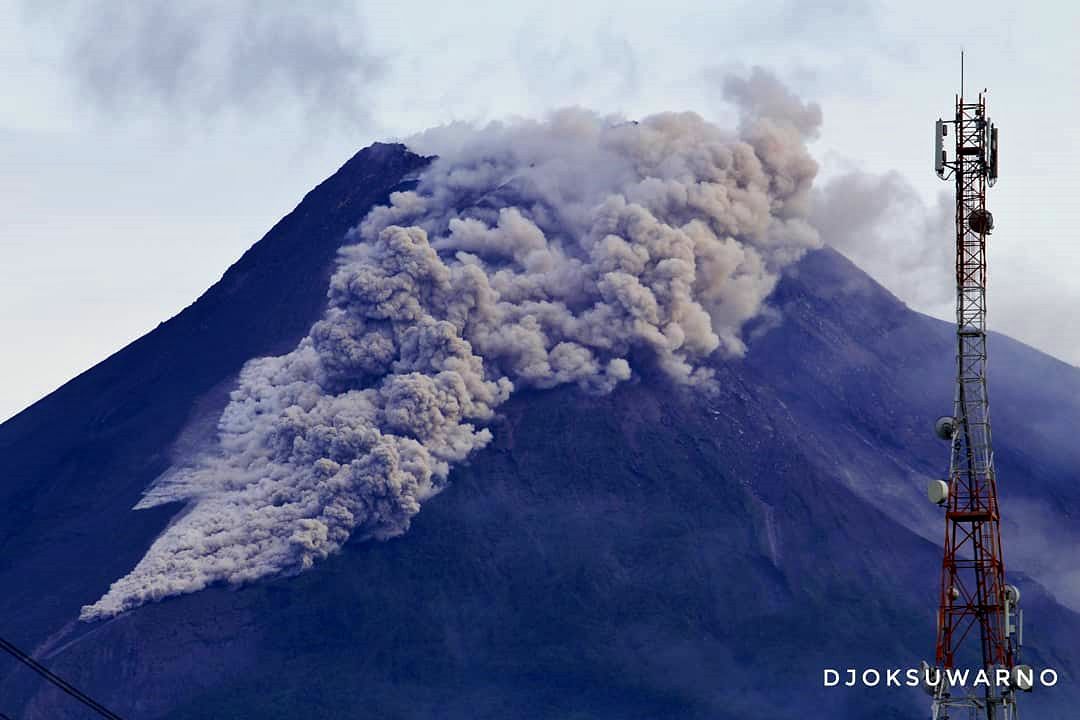 Moderate emission of steam-laden white plumes were observed moving down the slope before drifting west-northwest and west.

A faint glow from the summit crater could be observed at night. Sulfur dioxide (SO2) emissions were last measured below the benchmark average of 401 tonnes / day on January 26, 2021.

Ground deformation data from continuous GPS monitoring indicates that the building is still inflated compared to July 2019 despite a period of general deflation since July-August 2020, and has been experiencing short-term inflation since November 2020 except on the southwest slope. The edifice's deflation along with the near-term inflation of the northwest slopes since December 2020 has also been recorded by electronic tilt monitoring. Regarding effusive activity, the continuity of growth of the lava dome at the Nevados de Chillán volcanic complex is recognized with a greater advance towards the NNE and an extension of its fragments on the NNE slope, with a range of 100 m. Thanks to the analysis of satellite images (Planet Scope and Pleiades), the morphologies associated with the partial destruction of the surface portion are recognized.

In turn, the emission of the L5 lava flow continues with indications of an acceleration of its emission rate compared to the previous fortnight, and an increase in the opening of the feed crack, with a greater contribution of matter in the proximal zone, recognized by surveillance cameras. Based on the processing of satellite images (Planet Scope, Sentinel L2 A and Pleiades), we estimate a range of 788 m from the edge of the active crater and a forward speed of 0.07 m / h on its front. Through the analysis of digital elevation models, an increase in the total emission rate in December 2020 to 0.2 m³ / s is confirmed, to which is added the acceleration of the L5 dynamic for this fortnight. Until December 2020, a total accumulated volume is measured: 1,401,824 m³.

By processing the available thermal images, maximum temperatures of 333 ° C were observed during the occurrence of explosions and 204 ° C for the L5 lava flow currently located on the northern slope. Nevados de Chillan - A new source of thermal radiation is recorded in the lava flow "L5" and at the emission point of the north dome since 01/23 - image Sentinel L2A / various therm bands. / via Sernageomin Dr Erouscilla Joseph, director of the UWI-SRC center, said the eruption of the St Vincent soufrière was currently effusive, not explosive, but that could change given the historical activity observed at La Soufrière:

“ Magma gently oozes through a vent and forms a dome. The possibility of this type of eruption going from effusive to explosive exists. This volcano may show both types of eruptions. At the moment, based on the information available to us, it is impossible to meet the final timeline of what is happening, or whether it will happen at all. " Dr Joseph said that at present the danger is limited to gases exiting the dome for those working on the summit. There is a risk that, depending on the wind direction, the gases could travel downwind to surrounding communities.

A report has been received of yellowing vegetation in the crater and on a nearby farm, which is likely the result of acid rain.