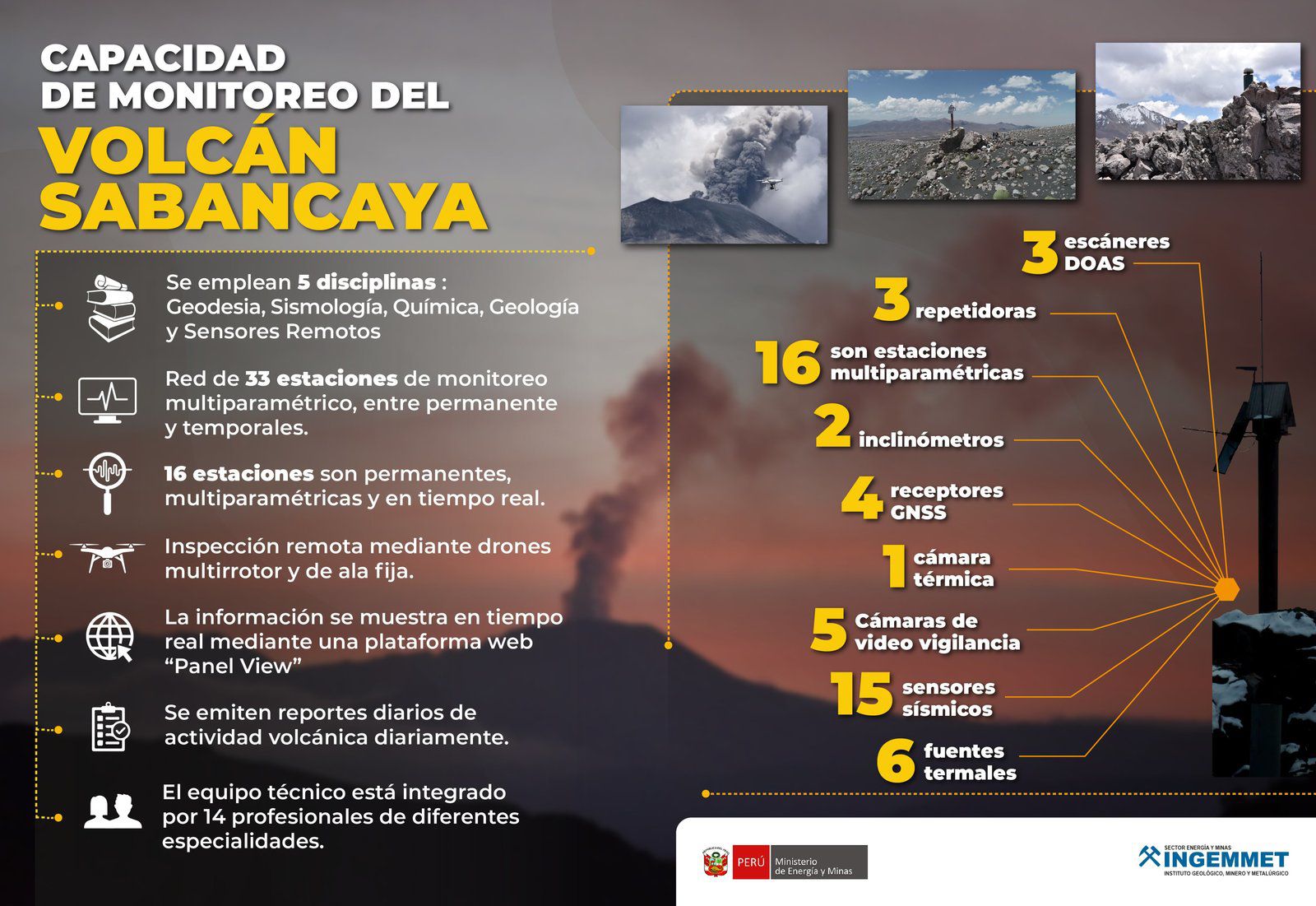 Sabancaya maintains activity at a moderate level, with an average of 32 explosions per day between January 18 and 24, 2021. They are accompanied by ash plumes reaching 3,500 meters high above the volcano.

During the period, the IGP recorded and analyzed 1,214 earthquakes of volcanic origin, associated with the circulation of magmatic fluids. VT earthquakes, related to rock fragmentation, from M1.9 to 2.7, are produced mainly in the NW and NE of Sabancaya.

No significant deformation anomalies, despite slight inflation in the southeastern sector of the volcano.

The alert remains at the Naranja level, with an inaccessible area with a radius of 12 km. At 00:00 UTC on January 25, 2021, the Stromboli monitoring network recorded a tremor peak which reached VERY HIGH values. This peak marks the start of a new lava overflow which generated a clear soil deformation of about 0.35 microradians (Figure: Red - tilt, soil deformation. Blue - Seismic tremor) exhausted after about 3 hours and is associated with a increased material turnover figures in the currently high Fire Sciara (21 n / day).

Stromboli activity continues to be characterized by an intense phase of spattering and strong explosions at the NE crater, while explosive activity in the SW and Central sector is weak or absent. Since the last update (n ° 2 of January 23), the tremor remains on ALTI values ​​with a slight upward trend. The VLP seismicity is shallow stable and indicates a very shallow magmatic column.

The SO2 and CO2 fluxes maintain a weak but progressive tendency to increase, which has persisted for several weeks, indicative of a recharge of the superficial magmatic system. The Kīlauea volcano is erupting. Lava activity is confined to Halemaʻumaʻu with lava erupting from a vent on the northwest side of the crater. SO2 emission rates remain high

The low fountain in the west vent feeds a lava channel that drains into the lava lake at Halema'uma'u Crater. At the moment, effusion rates correlate positively with higher tilt and RSAM (inflationary) values, greater lava effusion. The summit inclinometers are on an inflationary trend. Seismicity remains high but stable, with regular earthquakes and a few minor earthquakes.

The active western half of the lava lake was about 205m deep this morning on January 25, while the stagnant eastern half of the lake remains several meters below. The entire lava lake - including the stagnant eastern half - is perched / high above the crust between the perched lake and the crater wall. The east side is elevated about 1 m and the west side 4 m above the solidified lava crust adjacent to the crater wall.

Ol Doinyo Lengai - the crater fills and its center is occupied by a massive hornito - photo Gian Schachenmann via Michael Dalton-Smith. - one click to enlarge

An interesting info from Michael Dalton-Smith on the Ol Doinyo Lengai :

a photo taken by his friend Gian Schachenmann on January 24, 2021 shows that the crater of the volcano is filling up quite quickly; the floor level has climbed from 109 meters, below the crater rim last year, to 70 meters in January. A new massive hornito occupies the center of the crater.

He observed degassing and a faint night glow.