In Indonesia, VAAC Darwin issued 2 orange VONAs, respectively for Raung and Sinabung on January 27, and a red VONA for Merapi, on January 28, 2021.

Sinabung erupted on Wednesday, January 27, 2021, at 6:23 p.m. WIB, with the height of the ash column observed at ± 500 m above the summit (± 2960 m above sea level). We observe that the ash column is gray with a thick intensity towards the east. This eruption was recorded on a seismograph with a maximum amplitude of 5 mm and a duration of 141 seconds.

Communities and visitors / tourists not to conduct activities in villages that have been displaced, as well as the location within a radial radius of 3 km from the summit of G. Sinabung, as well as within a sector radius of 5 km for the south-eastern sector, and 4 km for the east-north sector.

In the event of ash rain, people are advised to wear masks when leaving the house to reduce the health effects of volcanic ash. Secure the drinking water facilities and clean the roof of the house from dense volcanic ash so that it does not collapse.

Communities that live near rivers that originate at Mount Sinabung to remain alert to the dangers of lahars. At Raung, a gray and brown plume of the main crater was observed with moderate to high intensity, about 200-600 meters from the summit on January 28 in the morning.

The seismicity is marked by 40 episodes of non-harmonic tremor, with an amplitude between 3 and 10 mm lasting 69 to 1,649 sec. ; there is also a tectonic earthquake. The BPPTKG has drawn up a new risk map and announces that the potential danger of Merapi is currently in the form of:

1. Boulder avalanches and pyroclastic flows in the south-southwest sector covering the Boyong, Bedog, Krasak, Bebeng and Putih rivers, with a maximum distance of 5 km.

2. Ejection of volcanic material during an explosive eruption within a radius of 3 km from the summit.

- 5 shallow volcanic earthquakes, with an amplitude of 40 to 75 mm and the duration of the earthquake was 8 to 13 seconds. The National Institute of Geophysics and Volcanology, Etna Observatory, announces that from the surveillance cameras, we see that the activity produced by the summit craters remains unchanged compared to the last update (Press release Etna - Update n.123 - 20.01.2021).

From the seismic point of view, from January 21, the average amplitude of the tremor remains in the high range showing a gradual increase, currently in progress. The location of the sources of the tremor remains confined to the southeastern crater area at a depth of approximately 2,900 m above mean sea level.

At the same time, infrasound activity localized mainly in the southeastern crater region continues. In particular, as of 07:30 UTC today there is a slight increase in both the number of events and their magnitude.

The incline and GPS station data show no significant changes. The dimensions of the new dome of the Soufrière de St Vincent have just been put online by the UWI-SRC. 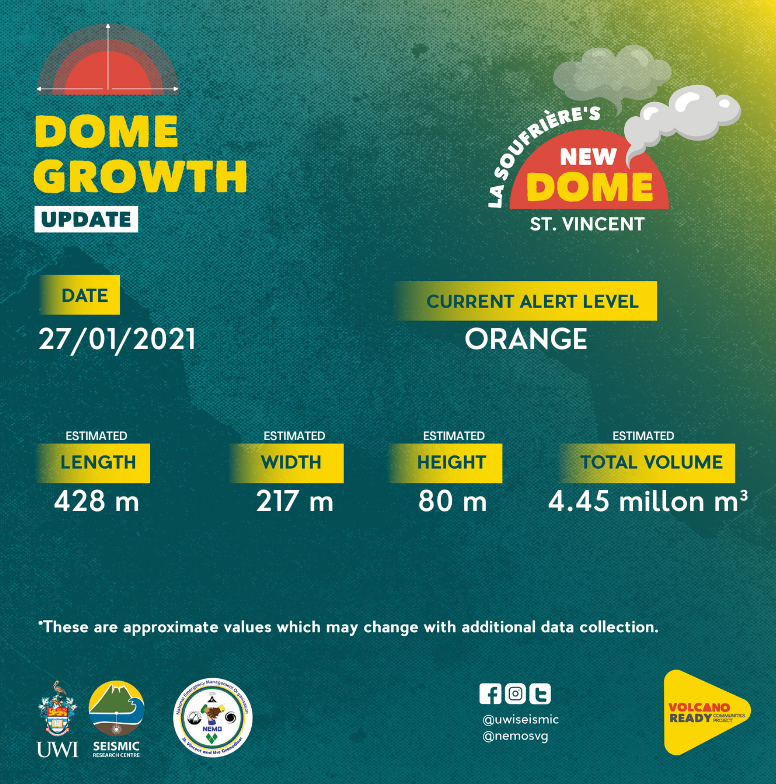