At 6 p.m. local time there is an increase in the intensity and frequency of Strombolian activity at the southeastern crater of Etna, this activity involves two mouths located in the easternmost part of the southeast crater. A weak ash emission persists.
The phase of increase in the amplitude of the volcanic tremor continues, showing medium-high values ​​... on the way to the 6 ° paroxysm 2021. The sources are located under the south-eastern crater at a depth of about 2500 m above sea level.
Infrasound activity is also increasing and the sources of the events are located in the southeast crater. The National Institute of Geophysics and Volcanology, Etnéo Observatory, announces that from 7 p.m. local, an increase in Strombolian activity is recorded at the CSE.

In particular, the two mouths where Strombolian activity was concentrated now produce a lava fountain, the height reached by this activity is about 400 m.

The ash emission activity into the atmosphere continues above the SEC.

From the surveillance cameras from 8:30 p.m. a lava overflow from the CSE towards Valle del Bove is observed. 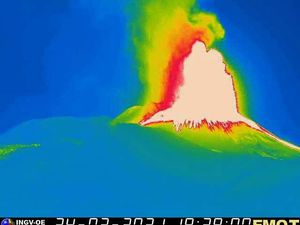 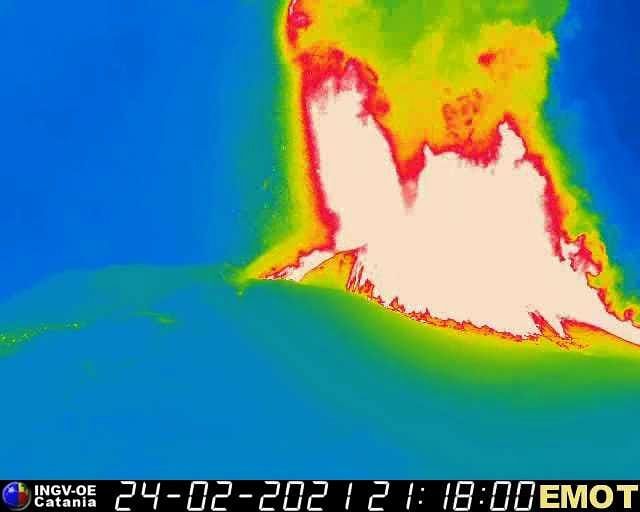 At 22:00 local time, the lava fountain reached the height of about 500 m from the edge of the crater, the eruptive column expands vertically for several kilometers.
A well-fed lava overflow is in progress in the southwestern sector of the CSE. The stream flowing in Valle del Bove is always fed.
The average amplitude of the volcanic tremor shows high values ​​with a tendency to increase further. The source location remains within the CSE area at a depth of approximately 2800 m above sea level. Infrasound activity is also high in both the rate of occurrence and the energy of the events. . The localization of infrasound events remains with the SEC. In its 23:35 report, the INGV indicates that the activity of the lava fountains at the SEC has ceased, the lava flows remain active in the southwest sector and in the east zone.
As for the average amplitude of the volcanic tremor, after a phase of increase to very high values, at 21:20 UTC, it showed a sharp drop reaching the average level, where it is still found. The source of the quake is located in the SEC area at a depth of about 2900 m above sea level. At the same time, the infrasound activity also suffered a sharp break.
decrease in both the rate of occurrence and the energy of events, which are localized to the SEC. Mount Sinabung erupted on Thursday, February 25, 2021 at 10:08 a.m. WIB with an ash column observed ± 1,500 m above the summit (± 3,960 m above sea level). The ash column was gray, with moderate to thick intensity, to the east and southeast. This eruption was recorded on a seismograph with a maximum amplitude of 66 mm and a duration of 191 seconds. After several severe earthquakes in the Reykjanes Peninsula on the morning of February 24, police, civil defense and the Earthquake Watch Service of the Meteorological Department declared the level of danger for the peninsula and region of the capital.

This powerful seismic swarm is spreading over a relatively large area of ​​the Reykjanes Peninsula and Kristín Jónsdóttir, director of natural hazard monitoring at the Icelandic Met Office, said in Iceland Review that residents should be prepared for the possibility of even larger earthquakes.

At least 45 of the earthquakes in the swarm are greater than magnitude 3, and at least 9 above M4, according to preliminary reports released around 12:30 p.m. Earthquakes have more than one point of origin extending between Lake Kleifarvatn and the town of Grindavík in southwest Iceland.

Rocks fell from high points in Reykjanes and white steam jets from geothermal areas were seen in the area.

Updated maps are available at IMO / https://en.vedur.is/earthquakes-and-volcanism/earthquakes/reykjanespeninsula/, and an interactive map at: https://skjalftalisa.vedur.is/index.html # / page / map Reykjanes Peninsula - the main earthquake was preceded by various seismic foci in the previous 2 days - situation (right) of the number and magnitude of the current swarm - Doc. Dr. Stephen Hicks - a click to enlarge