An important change to the dome of Sinabung, which this February 12 presents a wafer of lava extruded at the top, a little unbalanced and which will generate more  collapses. 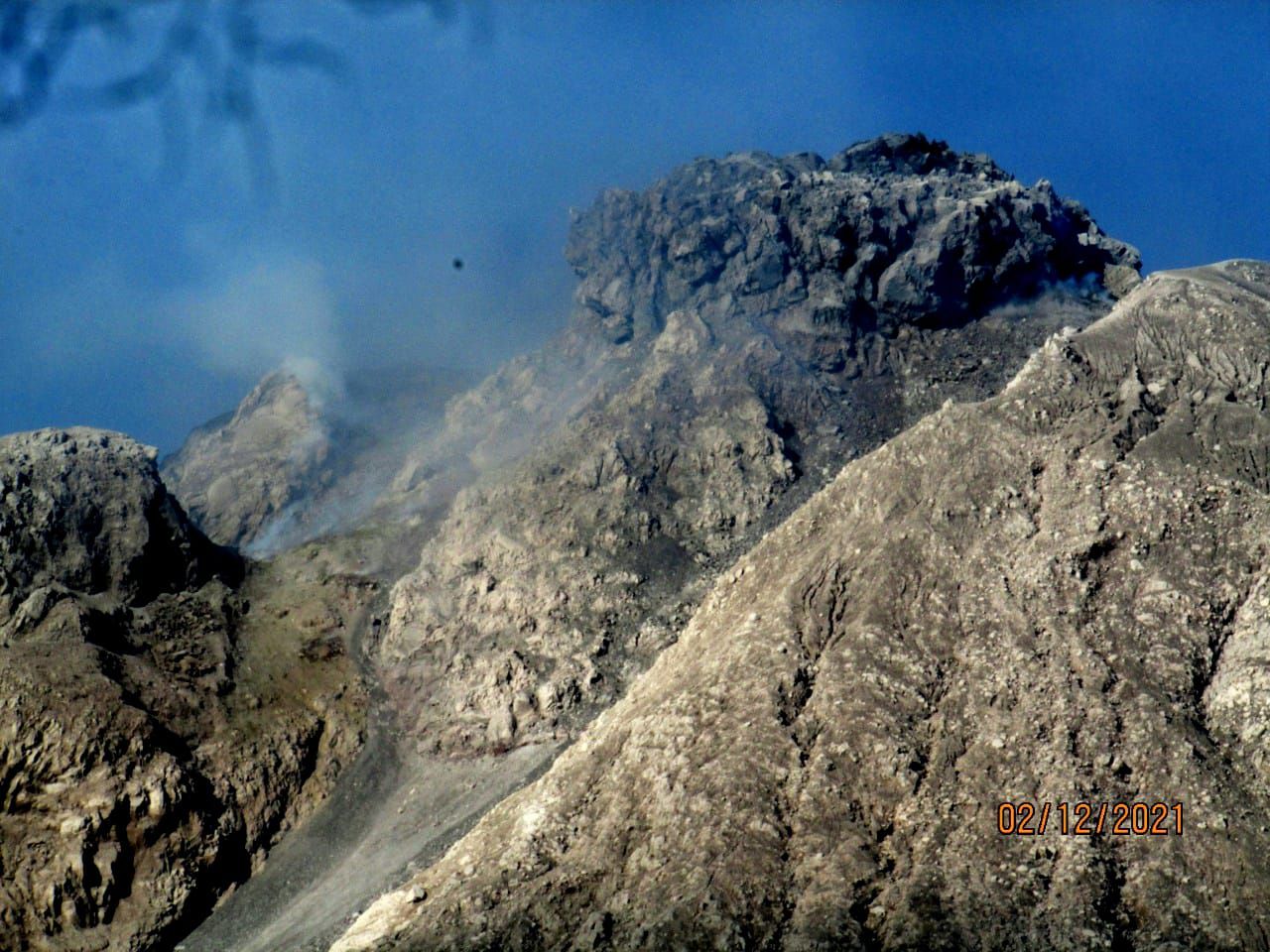 Sinabung - morphological change at the top of the dome - photo Sadrah Peranginangin 12.02.2021 - one click to enlarge This February 12, the PVMBG recorded:

The level of activity remains unchanged In Merapi, the seismicity of February 12 is characterized by:

- 2 emission earthquakes, with an amplitude of 4 to 8 mm and the earthquake lasted 11 to 15 seconds.

- 1 shallow volcanic earthquake, with an amplitude of 27 mm, and the duration of the earthquake was 9 seconds.

The level of activity remains unchanged The activity of Etna remains in the standards of the last days, with a stable tremor, but high.

At nightfall on February 11, 2021, Strombolian activity continues at the south-eastern crater, sporadic sequences of explosions occur at the Voragine crater, and rarer but fairly powerful explosions at the Bocca Nuova crater. 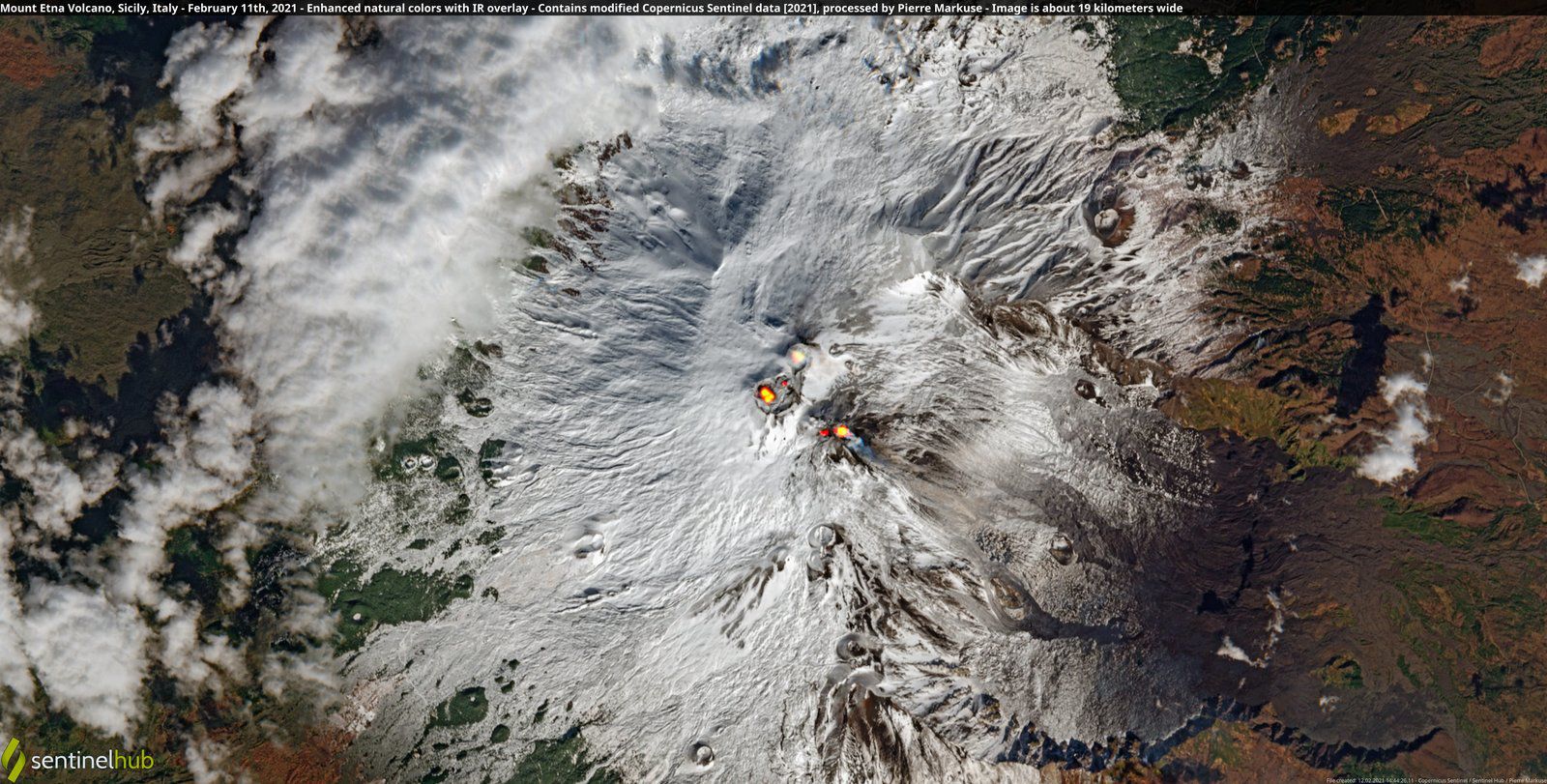 Etna SEC, seen from Biancavilla, on the southwest flank of the volcano - explosions at vents located in the scar this 02.12.2021 - photo Boris Behncke

The explosive-effusive phase of the Klyuchevskoy eruption, which began last October, is over.

According to seismic data from KB GS RAS (http://www.emsd.ru/~ssl/monitoring), the magnitude of the volcanic tremor decreased from 34 to 0.89 mkm / s from February 07 to 08. The temperature of the volcano's thermal anomaly fell sharply on February 07 and continues to drop. There was no Strombolian activity on the night of February 11 to 12. Only the low activity of the volcano's fumaroles is noted.

February 08, 2021 can probably be considered as the end date of the eruption.

Moderate gas-vapor activity from the volcano continues. The danger of ash explosion up to 19,700-23,000 ft (6-7 km) a.s.l. Remain however. Ongoing activities could affect low-flying planes.

The aviation code has been lowered to yellow. The Kīlauea volcano is erupting. His USGS volcano alert level is at WATCH

Lava activity is confined to Halemaʻumaʻu crater, with lava erupting from a vent on the northwest side of the crater.

As of the morning of February 11, the lava in the active potion west of Halema'uma'u lake was about 215m deep, with the eastern part of the lava lake solidifying on the surface.

Summit tiltmeters show inflationary tilt continuing over the past day.

Seismicity remains high but stable, with high earthquakes and a few minor earthquakes. Kilauea - Halema'uma'u - active western (left) part of the lava lake, which has hot glowing lava visible at the boundaries between the plates on the lava lake. The inactive eastern (right) part of the lake looks dark. USGS photo taken by N. Deligne on February 10, 2021.