News from Taal and Raung.

These episodes lasted between 2 and 5 minutes, at a depth of less than 1,000 m., Indicating an increase in hydrothermal activity. Since February 13, a total of 68 episodes of superficial tremor have been recorded; in addition, the pH of the main crater lake varied from 2.79 to 1.59, between January 2020 and February 2021, and its temperature rose to 77 ° C. The CO2 / H2S gas ratios are consistent with shallow magma degassing.

The deformation shows slight deflation around the main crater, and slight inflation of the region around the Taal, corresponding to constant magmatic degassing and hydrothermal turbidity. Alert level 1 / abnormal corresponds to a possible sudden increase in vapor or phreatic explosions, to lethal accumulations or the expulsion of volcanic gases, to minor ash falls.

The areas of the central crater and the Daang Kastila fissure remain prohibited. Raung's activity seems to be calming down, with less ash emissions and different seismicity in recent days ... which has allowed the reopening of Banyuwangi airport in East Java.

Lava is still present in the crater, on Sentinel-2 footage on February 14. 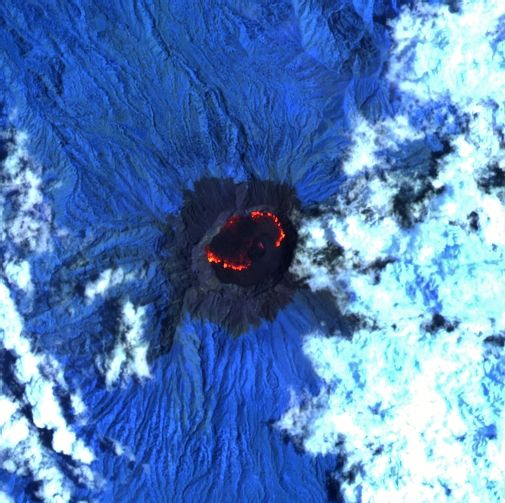