After a small calm of a few days, Strombolian activity resumed at the southeast crater of Etna on February 28 at around 7.45 am local time, with a sudden increase in the tremor.

The images taken by the thermal cameras of Monte Cagliato (east side of Etna) and Montagnola (high southern slope) show the speed with which the phenomena developed, from the first small explosions to the sustained lava fountains, with the creation of a subplinal eruptive column. Strombolian activity, characterized by a continuous jet, was mainly concentrated in two vents and reached an initial height of about 300 m. An overflow feeds a lava flow towards the Valle del Bove.

At 10:20 a.m. local time, a sudden decrease in tremor to medium-low values ​​was observed. The source of the quake remains in the area of ​​the SE crater at a depth of about 2,600 m above sea level. Etna - the impressive plume of the 7th paroxysm at 09:50 UTC, or 1:30 after the start of the broadcast; the overflow and the lava flow are also visible - image Sentinel2 28,02,2021 / via Copernicus / Directorate-General for Defense Industry and Space l DG DEFIS - one click to enlarge A resumption of Strombolian activity in the SEC, accompanied by the emission of ash is observed from 11:20 a.m., with a further increase in the average amplitude of the volcanic tremor ... to drop around 12 p.m.

The source of the tremor is still located in the area of ​​the SE crater, at a depth of about 2500 m above sea level, while showing a gradual slide towards the other summit craters, during the last hours. Analysis of Stromboli camera footage revealed explosive footage in the North Zone, which began with three events of lesser intensity at 1:32:50, 1:33:00 and 1:33:10 UTC, respectively.

After approximately ten seconds, a major explosion occurred at 1:33:30 UTC lasting approximately 10 seconds and ended at 1:34:00 UTC.
This latter activity produced a fall of coarse material along the Sciara del Fuoco and part of the material fell in the direction of Pizzo.

From the seismic point of view, after the phase of increasing the amplitude of the tremor, which followed the explosive sequence, the values ​​returned to the standard around 01:37 UTC approximately. No significant change is observed in the frequency of occurrence of explosive events.
The strain data does not show significant changes. 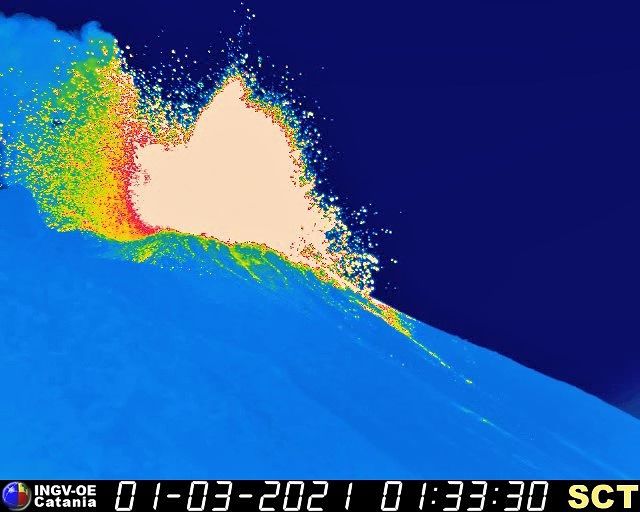 The Pacaya maintains weak to moderate explosions on February 28, characterized by sporadic expulsions of incandescent material 150 meters above Mackenney crater, and an ash plume dispersing westward, with fallout reported to Patrocinio.

Its effusive activity feeds a lava flow towards the SSO, of 1,750 meters long.

Insivumeh recalls the ban on access to the Mackenney and the flow areas, due to their instability, their high temperature and the gases emanating from them. In Klyuchevskoy, the fissure eruption on the northwest flank, which began late in the day on February 17, continues with the formation of a cinder cone.

In the first days of the eruption, a lot of pyroclasts were expelled by the gases and its growth was rapid.

Then with the arrival of a magma less saturated with gas, the eruption passed to a more effusive phase, slowing down the growth of the cone; it begins to collapse in the lava flow which emanates from it. Klyuchevskoy- the growing cinder cone on the active crack of the NW flank - photo Сергей Самойленко / 02.28.2021