Activity of Etna, Taal, Bagana and seismic swarm in Reykjanes.

The 13th climax in a month at the southeastern crater of Etna occurred under heavy cloud cover on the night of March 14 to 15, 2021.

From the surveillance cameras from 20:10 UTC on 14.03.2021, the resumption of Strombolian activity at the Southeast crater is observed.

At the same time, Strombolian activity continues at the craters of Voragine, Bocca Nuova and the northeast crater.

The average amplitude of the volcanic tremor shows an increase reaching high values. The sources of the quake are located in the CSE at a depth of about 2.5 km asl. Following a further increase in the mean amplitude of the volcanic tremor, the second level threshold is reached, the source being located in correspondence with the south-eastern crater at about 3000 m altitude.

Infrasound activity is also supported both in the rate of occurrence and in the energy of events.
The strombolian activity of the south-eastern crater has turned into a lava fountain. Due to the cloud cover, it is not possible to observe the activity in progress. Around midnight, the National Institute of Geophysics and Volcanology, Etneo Observatory, reports that an overflow of lava is observed from the East zone of the SE Crater which extends towards the Valle del Bove.

In its report of 03.15 / 03.43 am, the INGV indicates that the activity of the lava fountain at the South-East crater is over. Moderate Strombolian activity persists and the lava flow that expands along the western slope of the Valle del Bove continues to be fed.
From the seismic point of view, the amplitude of the volcanic tremor has decreased, returning to average values. The source of the tremor is located near the SE crater at a depth of 2500 m above sea level.

Analysis of the clinometric data of the paroxysmal event showed variations at different stations, with cumulative maximum values ​​(less than 3 microradians) recorded at the Cratere del Piano (ECP) station. GNSS network data over the past few hours did not show
significant changes. 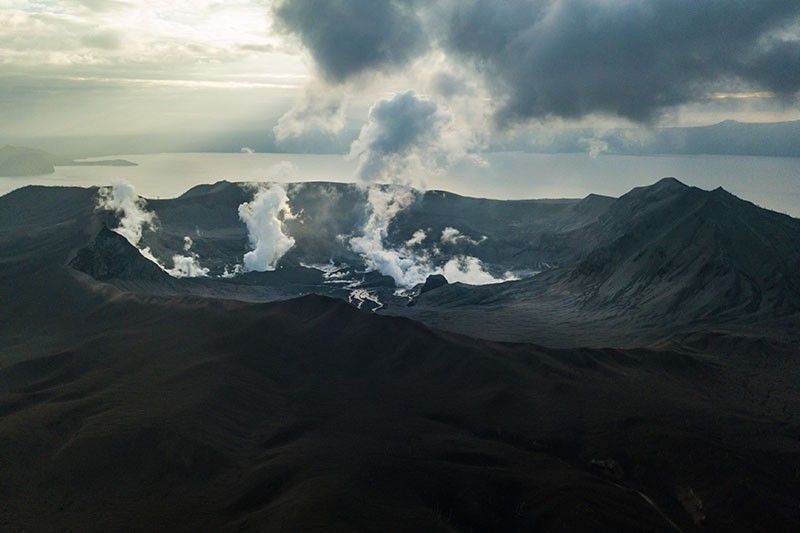 In Taal, in the Philippine archipelago, the Phivolcs reports for the day from March 13 to 14 / 8 a.m. a total of 74 volcanic earthquakes, including 46 episodes of tremor of duration varying between 1 and 4 minutes.

The activity of the main crater consists of weak emissions of steam plumes at a height of ten meters.

From March 14 to 15/8 a.m., a total of 252 volcanic earthquakes are recorded, including 17 tremor episodes and 5 hybrid events.

The deformation parameters reflect a slow and constant inflation and expansion of the Taal region since the eruption of January 2020, and indicate increasing magmatic activity at shallow depth. The eruptive phase, which began in Bagana, on Bougainville Island in Papua New Guinea in February 2000, continues, characterized by thermal anomalies identified on March 8-9, with 35 MW max. and March 11-13, with 25 MW max.

The Bagana volcano, which occupies a remote part of central Bougainville Island, is one of the youngest and most active volcanoes in Melanesia. This massive symmetrical cone was largely constructed by an accumulation of viscous andesitic lava flows. The entire edifice could have been built in about 300 years at its current rate of lava production. Eruptive activity is frequent and characterized by a non-explosive effusion of viscous lava that maintains a small lava dome in the summit crater, although explosive activity occasionally producing pyroclastic flows also occurs. The lava flows form spectacular, freshly preserved tongue-shaped lobes up to 50m thick with prominent dikes running down the flanks on all sides. Yesterday March 14, 2021, just over 3,000 earthquakes were located on the Reykjanes Peninsula.

The largest M5.4 earthquake was measured just west of Nátthagi at 2:15 p.m. It was widely felt, north of Sauðárkrókur and east of Vestmannaeyjar. 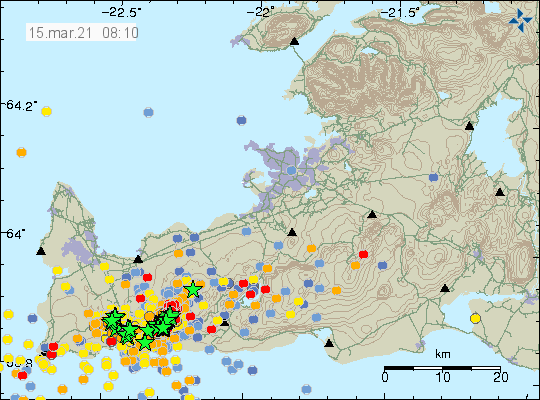