Activity of Etna, Veniaminof and seismic swarms in the Reykjanes Peninsula.

Strombolian activity resumed at the level of the SE crater of Etna on March 9, 2021. As for the average amplitude of the volcanic tremor from 17:30 GMT, there is an increase, which for the moment remains in average values -high. The source of the quake is located at the SE Crater at a depth of about 2,500 meters above sea level.

The infrasound activity also increases and is localized in the SE crater. Data from GNSS soil deformation monitoring networks and clinometry show no significant changes. Scenes documented by the INGV-Osservatorio Etneo surveillance camera show simultaneous explosions at the Voragine crater and the southeast crater. March 9, 2021 in the evening

From the surveillance cameras, from around 19:13 UTC, an overflow of lava can be observed from the SE crater towards the Valle del Bove.

From 20:00 UTC, there is an increase in strombolian activity at the CSE, accompanied by the emission of ash which rapidly disperses in the atmosphere towards the NE. The lava flow continues to be fed and the front is at an altitude of about 2900 meters above sea level advancing towards the Valle del Bove.

The intracrateric explosive activity at the summit craters continues. 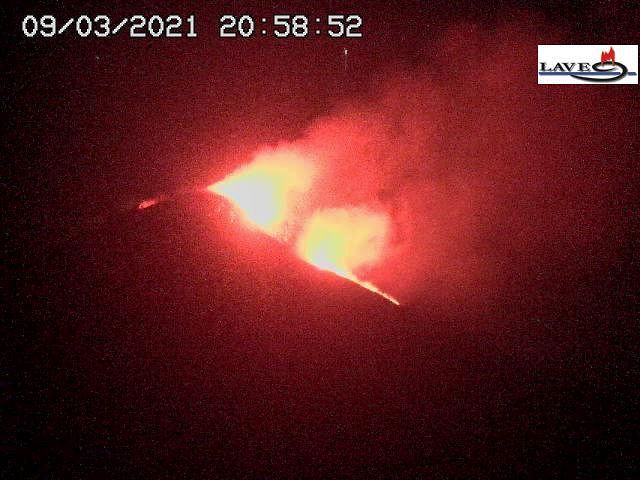 The mean amplitude of the volcanic tremor showed a further increase, reaching high values; the sources of the quake are in the CSE at a depth of about 3000 meters above sea level.

After a short return phase, the average amplitude of the volcanic tremor, from 9:30 p.m. GMT, began to increase again to reach the second level threshold, with the Strombolian activity located at the southeast crater, which increases to a lava fountain; the lava flow is fed and reached an altitude of about 2200 meters above sea level. Due to cloud cover, it is not possible to observe the ongoing activity continuously. The activity of the lava fountain at the southeast crater ended at 03:30 UTC, the lava emission that is developing along the western slope of the Valle del Bove continues to be moderately fed and at the time the lava front reached the altitude of about 1800 m asl.
From the seismic point of view, the amplitude of the volcanic tremor has returned to average values. 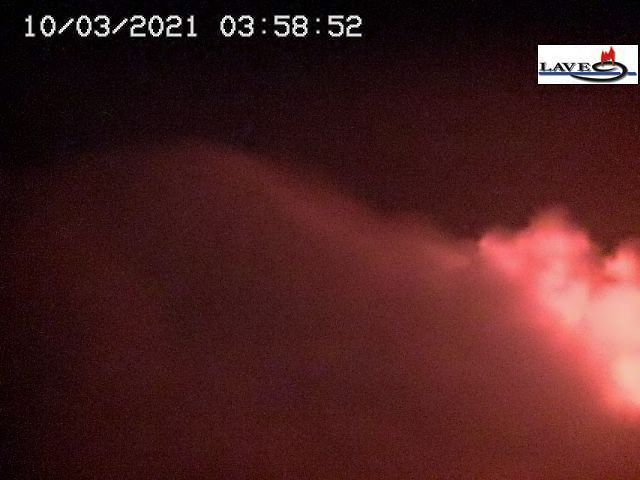 Clear satellite images of the 03/07/2021 eruption showed ash emissions from the small cone in the Veniaminof summit caldera, in addition to the probable lava eruption from a vent at ~ 1 km (0.6 miles ) east of the top of the cone on the flank cone under the intracaldera glacier.
This activity produces incandescence and greatly elevated surface temperatures, as well as a small plume of steam and meltwater. A low-level plume of volcanic ash and gas is likely continuing and has been observed by pilots, as well as web cameras and satellite imagery during periods of clear weather over the past day. The ash and gas plume was below 10,000 feet asl yesterday and was not observed in cloudy conditions overnight or this morning. The plume extended up to 150 km (93 miles) northeast yesterday afternoon, but the ashfall is mostly confined to the summit caldera near the vent. No ash fall has been reported in neighboring communities. In the Reykjanes Peninsula, around 5:20 a.m. on March 9, 2021, increased seismic activity was detected in the southernmost part of the magma passage beneath Fagradalsfjall. A tremor pulse was detected at around the same time and lasted until about 7 a.m. This probably means that the passage of magma is developing towards the SW. Since then, there has been regular activity of small earthquakes.

The latest satellite images, GPS measurements and models all indicate that the flow of magma has diminished since the start of last week. Still, the magma is close to the surface and we have to continue to assume that an eruption could occur. If the magma passage continues to grow over the next few days and weeks, we might also expect earthquake waves similar to that of the weekend, which was powerful enough to destabilize the people of Grindavík.

Experts still assume that one of the four scenarios is the most likely:
- Seismic activity will decrease in the days or weeks to come
- Activity will increase with larger earthquakes, up to M6 by Fagradalsfjall
- An earthquake of up to M6.5 will come from Brennisteinsfjöll.
- The magma intrusion at Fagradalsfjall continues, leading ... either to a diminishing magma flow, with magma cooling and hardening, or to a fissure eruption and lava flow that will probably not threaten inhabited areas. At 23:01, an earthquake of M4.0 occurred in Fagradalsfjall, a few minutes later another of M3.7 followed. They were felt in the southwest of Iceland.

At 6:45 p.m. last night, the frequency of minor earthquakes increased but no sign of a volcanic tremor was detected. A few earthquakes of magnitude greater than M3.0 were detected during this activity, the largest one M3.4 at 8:40 p.m. 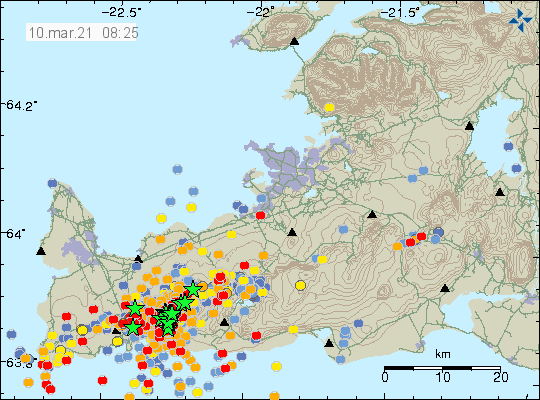