Until March 23, 2021, seismic activity had been dominated by very small low frequency events that were associated with the ongoing extrusion of the lava dome.

As of approximately 10:30 a.m. local time (2:30 p.m. UTC) on the 23rd March 2021, the surveillance network recorded a swarm of small, low-frequency seismic events that lasted about 45 minutes. These events were probably associated with the movement of magma under the dome, although their depth cannot be determined.

As of 4:53 p.m. local time (20:53 UTC) on March 23, 2021, the monitoring network began recording volcano-tectonic (VT) earthquakes. These earthquakes are normally associated with subterranean fractures of the rock mass and are usually generated by magma pushing through an inflexible rock mass. Volcano-tectonic earthquakes have been located beneath the volcano, at depths of up to 10 km below the summit. The largest of them had a magnitude of 2.6.

The 2020-2021 St. Vincent Soufriere Dome continues to grow laterally into the crater, as it encircles the old 1979 dome.
Conditions were very windy on March 23, but the team of technicians and scientists managed to take a few snapshots and began preparations for the installation of a multi-gas instrument.
Thanks to the contribution of the French Civil Security of Martinique. It takes a lot of skill to land on the flanks of the volcano in adverse weather conditions.

The alert level remains at Orange and no evacuation order or notification has been given. Following the resumption of seismicity on March 13 under the Piton de la Fournaise, it continued and intensified. Thus between March 13 and 24, 250 summit volcano-tectonic earthquakes, with a magnitude between <1 and 2.6, were recorded and located under the Dolomieu crater between 0 and 0.9 km above sea level. (ie between 1.6 and 2.5 km deep).

Yesterday, March 24, 81 earthquakes were recorded under the summit area, including an earthquake of magnitude 2.6. This seismicity leads to destabilization of the edges of the Dolomieu crater and the number of collapses, 31 yesterday, is also increasing.

This seismicity is accompanied by an inflation (swelling) of the Piton de la Fournaise building. The source at the origin of this inflation is located between 1.5 and 2 km deep under the Dolomieu crater, at the level of the superficial magmatic reservoir.

The CO2 fluxes in the ground are still increasing, especially on the sides of the volcano in the far field (Plaine des Cafres and Plaine des Palmistes sectors). Since CO2 is the first gas to be released from magma at great depth (from the mantle), its detection in the far field is often associated with a deep rise of magma.
Since yesterday, March 24, a slight increase in SO2 has been detected on the NOVAC stations of the OVPF located around the perimeter of the Enclos Fouqué, as well as on the multigas station of the OVPF located at the top. On the summit station, this increase in SO2 is coupled with CO2.

This deep rise of magma is at the origin of the pressurization of the superficial magmatic reservoir, and of the associated seismicity and inflation which intensify.

This recharging process from the depths to the shallow reservoir can take several days to weeks before the roof of the reservoir weakens and breaks, resulting in an injection of magma to the surface and an eruption, but can also stop without giving rise to a rash in the short term.

Last minute: the Prefecture announces the closure of public access to the upper part of the Enclosure as of Thursday, March 25 at 2 p.m. Activity at the main crater consisted of a weak emission of steam-laden plumes from the fumarolic vents that rose 5 meters. Sulfur dioxide emissions which averaged 1,109 tonnes / day were measured yesterday March 24, 2021.

Regarding the soil deformation parameters from the electronic tilt, continued analysis of GPS and InSAR data indicated very slow and steady inflation and expansion of the Taal region since the eruption of January 2020. These parameters may indicate increased magmatic activity shallow below the edifice.

Alert Level 2 (Heightened Agitation) is currently maintained over Taal Volcano, but this unrest has increased and is under constant assessment. 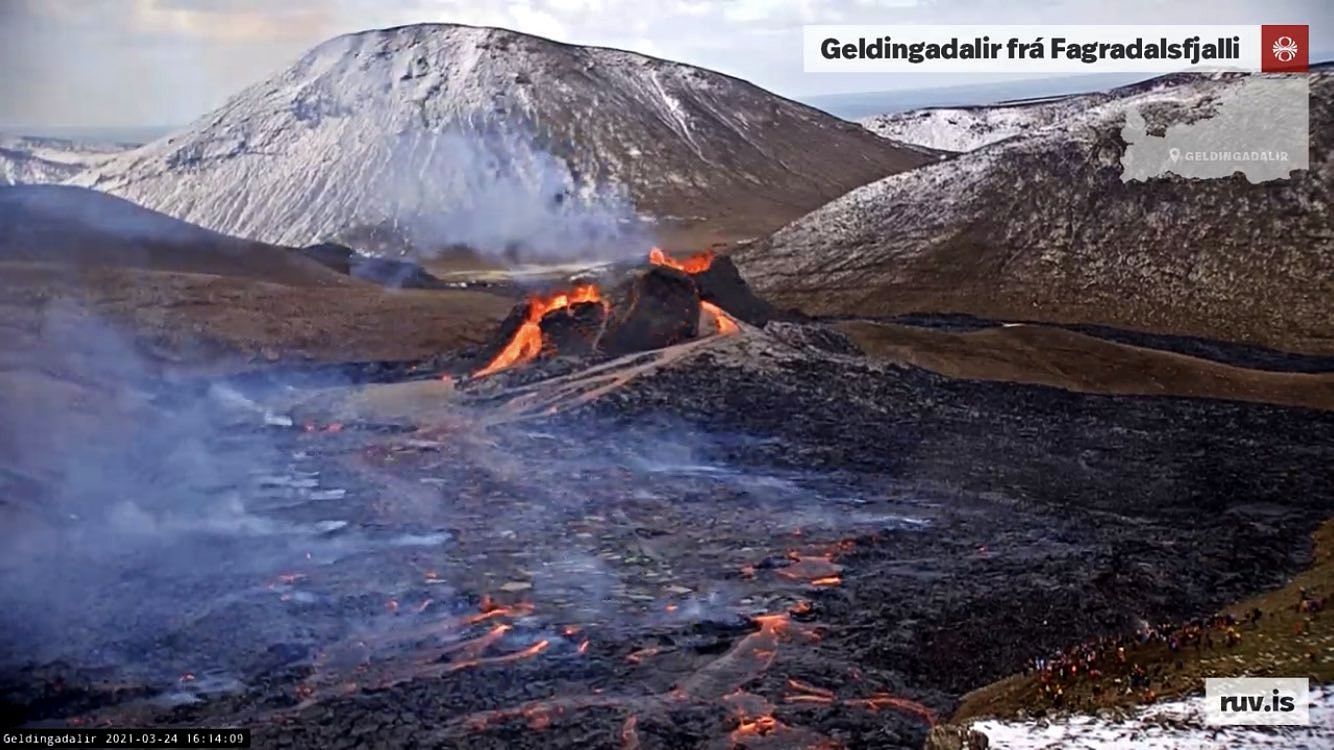 In Iceland, some changes can be seen in the Reykjanes Peninsula in Geldingadalur:

- lava pools quickly form in Geldingadalur, (video that Aníta Ólöf Jónsdóttir - https://www.facebook.com/Hekluhestar/videos/1070698806752537). It shows how easily a layer of solidified magma loosens from the liquid magma in the lava pond that lies beneath all the new black lava.
The magma that flows from the craters flows in particular under the newly solidified lava. So it is dangerous to walk on newly solidified lava, even when it has turned black and cold. (RUV) As part of monitoring the eruption, Pleiades images were used to measure lava thickness in the lava field, which reached up to 22 meters, lava volumes and effusion rates, thanks to ForMaTere for arrangements and CNES & AirbusSpace. How long could this eruption last ? (ISOR - Iceland geosurvey)

This process began on February 24, 2021.
It took about 4 weeks for the influx of magma to fill the space provided by the movement of the plate in the magma chamber. After that, the magma had no other exit than to the surface in Geldingadalur.
It is as if a direct pipe has come to the surface of the molten material at the top of the mantle. It is therefore the quantity at the top of the mantle which determines the quantity of material which finally reaches the surface.
It has been estimated that the flow of magma through the Geldingadalur craters is approximately 5.7 cubic meters per second. It is a similar amount that has constantly flowed from the mantle in the Krafla magma chamber for 10 to 15 years in the last century. So it is just as likely that we will see another eruption on the Reykjanes Peninsula that could last for years.

A prolonged rash is not predicted, but it could last much longer than one would expect depending on the small size of the eruption. But we're at least lucky with where the magma chose to surface, where it could erupt for years without major problem and form a shield volcano.