A modest Strombolian activity occurred at the southeastern crater of Etna at the start of the day, at the same time the intracrater explosive activity continued at the Voragine craters, at Bocca Nuova and at the crater. BORN.
The average amplitude of the volcanic tremor shows an increase reaching high values ​​and the sources of the tremor are located in the CSE at a depth of about 2.5 km s.l.m.

From approximately 05:30 UTC, there is an increase in the intensity and frequency of Strombolian activity at the southeast crater. The activity produces an eruptive cloud which reaches a height of about 4000 m above sea level, and based on the forecast model provides a dispersion of the eruptive cloud and relapse of ash to the east.

Eruptive activity towards the other craters continues. From 06:30 UTC, Strombolian activity at the southeast crater intensified further; in addition, from 06:54 UTC, an overflow of lava is observed from the eastern area of ​​the CSE which expands towards the Valle del Bove; at this time, the lava front is at an altitude of about 3000 meters above sea level.
From the seismic point of view, the increase in the amplitude of the volcanic tremor continues to reach high values ​​and the source of the tremor is near the south-eastern crater at a depth of about 2.5 km s.l.m. The number of infrasound events is high and their location seems to be close to the Southeast crater.
No significant change is observed in the distortion signals of GNSS and clinometric networks. At 07:41 UTC, the INGV announces that the Strombolian activity has turned into a lava fountain with the production of an eruptive cloud up to a height of about 6000 m. in an easterly direction. The lava flow continues to expand towards the Valle del Bove and has reached altitude 2800.

At 8:39 UTC, the observatory report mentions that the eruptive cloud, produced by the activity in progress, reached an altitude of about 8,500 meters and dispersed towards the east; an ash fall on the town of Fleri has been reported. The lava flow produced by the overflow is fed and the flow has reached an altitude of about 2,100 meters above sea level. Addenda: At 09:50 UTC, the lava fountain ceased and weak Strombolian activity at the Southeast Crater stopped.

Regarding the lava emission, the main lava flow that develops in the Valle del Bove continues to be moderately fed and the lava front is at an altitude of about 1700 m above the level of the sea. A second lava flow was also observed which extended to the south-east on the western slope of the Valle del Bove until reaching an altitude of about 3000 m above sea level and also seems to be no longer fed. and cooled.
An ash fall was also reported on the villages of Milo, Santa Venerina, Torre Archirafi.
Strombolian intracrateric activity continues at the level of Voragine, Bocca Nuova and the Northeast crater.
The average amplitude of the volcanic tremor decreases while maintaining high values. The sources of the tremor are located in the SE crater at a depth of about 2.5 km above sea level.
The rate of occurrence of infrasonic events is high and their location remains at the SE crater. VAAC Washington recorded 5 ash emission alerts at Sangay on March 11, observed by satellites at an altitude of 1,500 to 8,500 meters above crater level.The directions of these emissions varied from north, northwest and west of the volcano.

The eruption of Sangay in the morning of March 11, produced pyroclastic flows towards the south-eastern flank (rio Volcán). This eruption, at tropospheric altitudes, was analyzed by Sentinel-5P Tropomi, which measured about 25 kilotons of sulfur dioxide in the volcanic cloud. 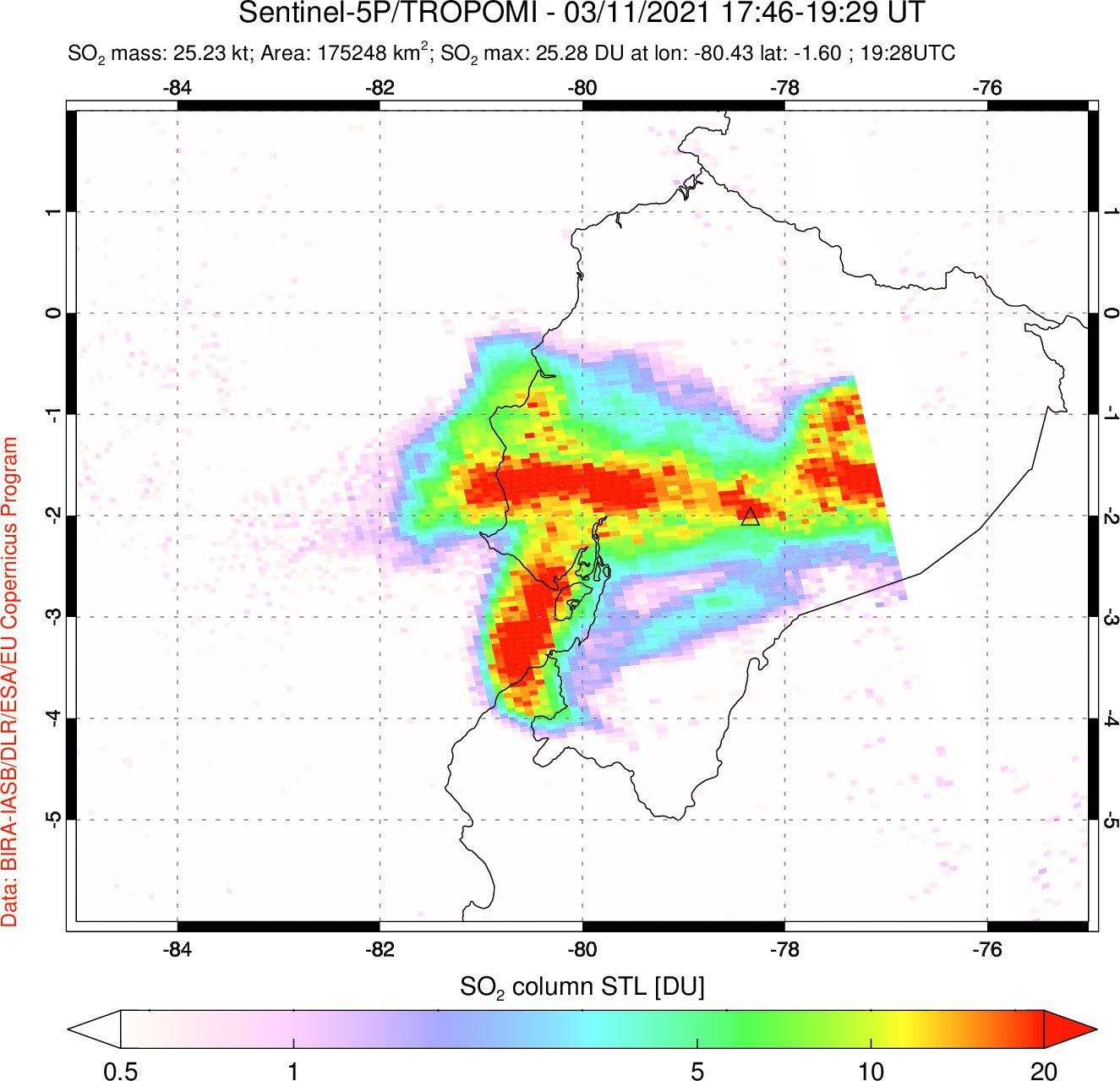 No thermal alert for the Sangay volcano has been recorded on satellite data over the past 24 hours.
The cloudiness was permanent in the area, preventing direct observation of surface activity.

In the images shared by the Volcanic Observers Network (ROVE) and in the ECU911 report, high intensity ash fall was recorded in the township of Guamote; moderately in the townships of Chambo, Riobamba, Penipe and Guano; and slightly to Colta, Alausí and Macas.

The accumulated volcanic material can be easily remobilized by precipitation, forming secondary lahars or mudslides and debris. It is recommended not to be in areas close to the banks of the Volcán and Upano rivers.