News from Sinabung and Geldingadalgos.

The PVMBG recorded for March 29: The activity level remains at 3 / siaga, with recommendations to communities and visitors / tourists not to carry out activities in the villages that have been moved, as well as the location within a radial radius of 3 km from the top of the mountain. Sinabung, as well as a sector radius of 5 km for the south-eastern sector, and 4 km for the east-north sector.
In the event of ash rain, people are advised to wear masks when leaving the house to reduce the health effects of volcanic ash. Secure drinking water facilities and clean roofs of houses from dense volcanic ash so that it does not collapse.
People who live near the rivers that flow to Mount Sinabung should be aware of the dangers of lahars. It is not only a spectacle, it is a unique chance to see the birth of a new volcano, more particularly a new shield volcano, and to be able to follow its evolution live.

Back to the Geldingadalgos day on Sunday March 28 in photos. Eruption in progress in Geldingadalur - 28.03.2021 - Part of the collapsed northern cone was carried by the lava flow like a large raft - photos via Óróapúls / Volcanism in Iceland 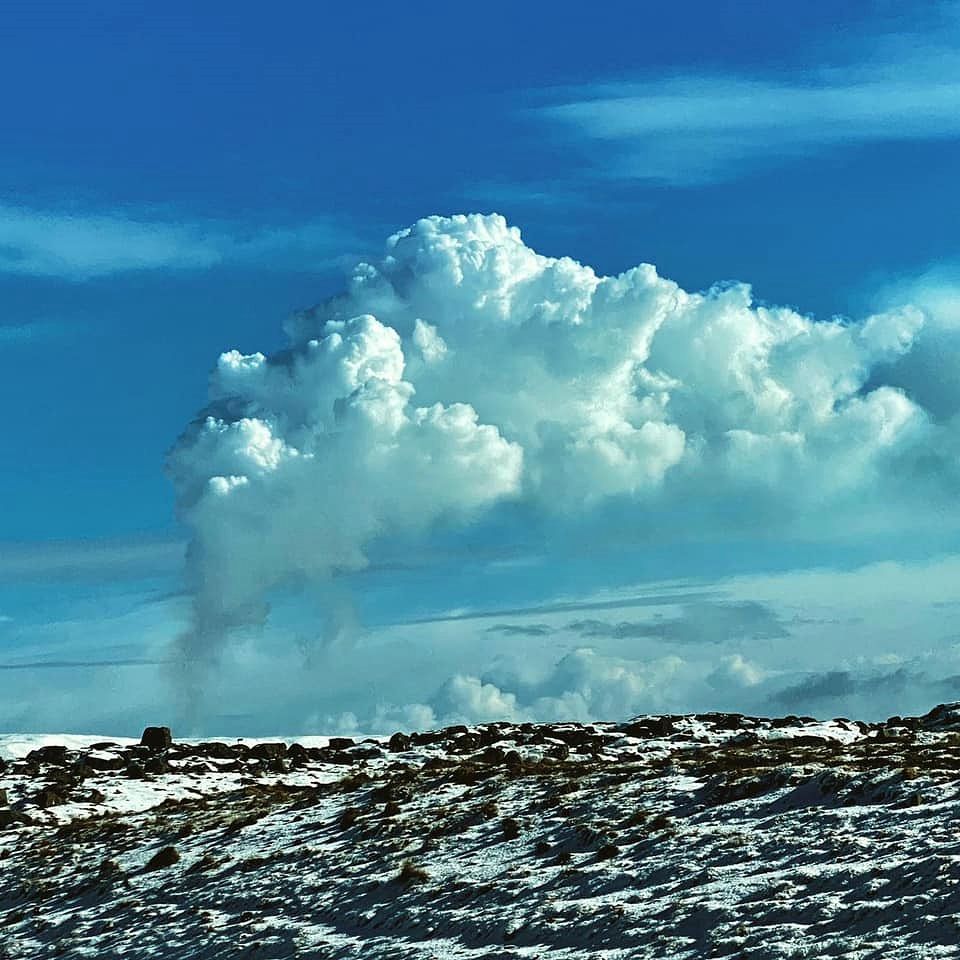 Some summary notes from official bodies, the first from IMO :

"The volcanic eruption in Geldingadalur has now lasted for ten days. The lava is basaltic and very fluid with little explosive activity. It is a very small eruption and the lava flow has been stable at 5-7 m³ / s since its appearance.
Currently, the lava field extends into Geldingadalur; if the eruption continues at a similar rate, it is modeled that lava will flow east towards the Merardalur valley. If the eruption continues, it could be classified as a shield volcano / shield volcano.
Shield volcanoes typically form over long periods of time with lava fields extending a few to several kilometers around its source. There is currently no way of telling how long the rash will last. " 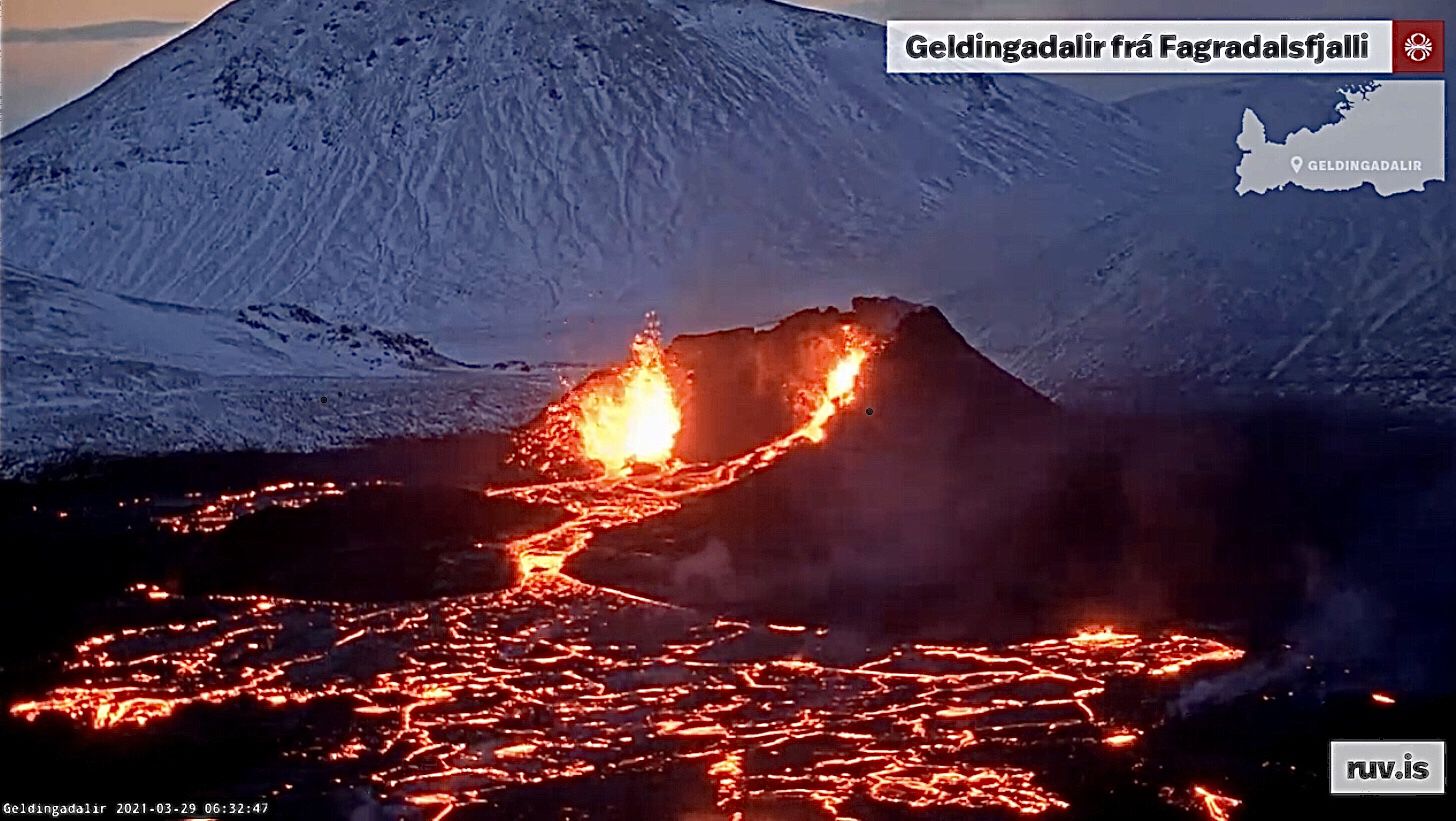 Details and measurement results have been communicated by the University of Iceland, an extract of which is below:

“The best way to estimate the size of the eruption in Geldingadalur is to map the lava and calculate its volume at any time. This gives an average lava flow between measurements. Lava has now been mapped 10 times since the eruption began, most recently on Friday March 26. The volume of lava at any given time and the lava flow up to March 26 are shown in the attached graphs, in addition to which the results of chemical analyzes of the magma are presented.

On the morning of Sunday March 28, the lava reached an estimated 4 million cubic meters. 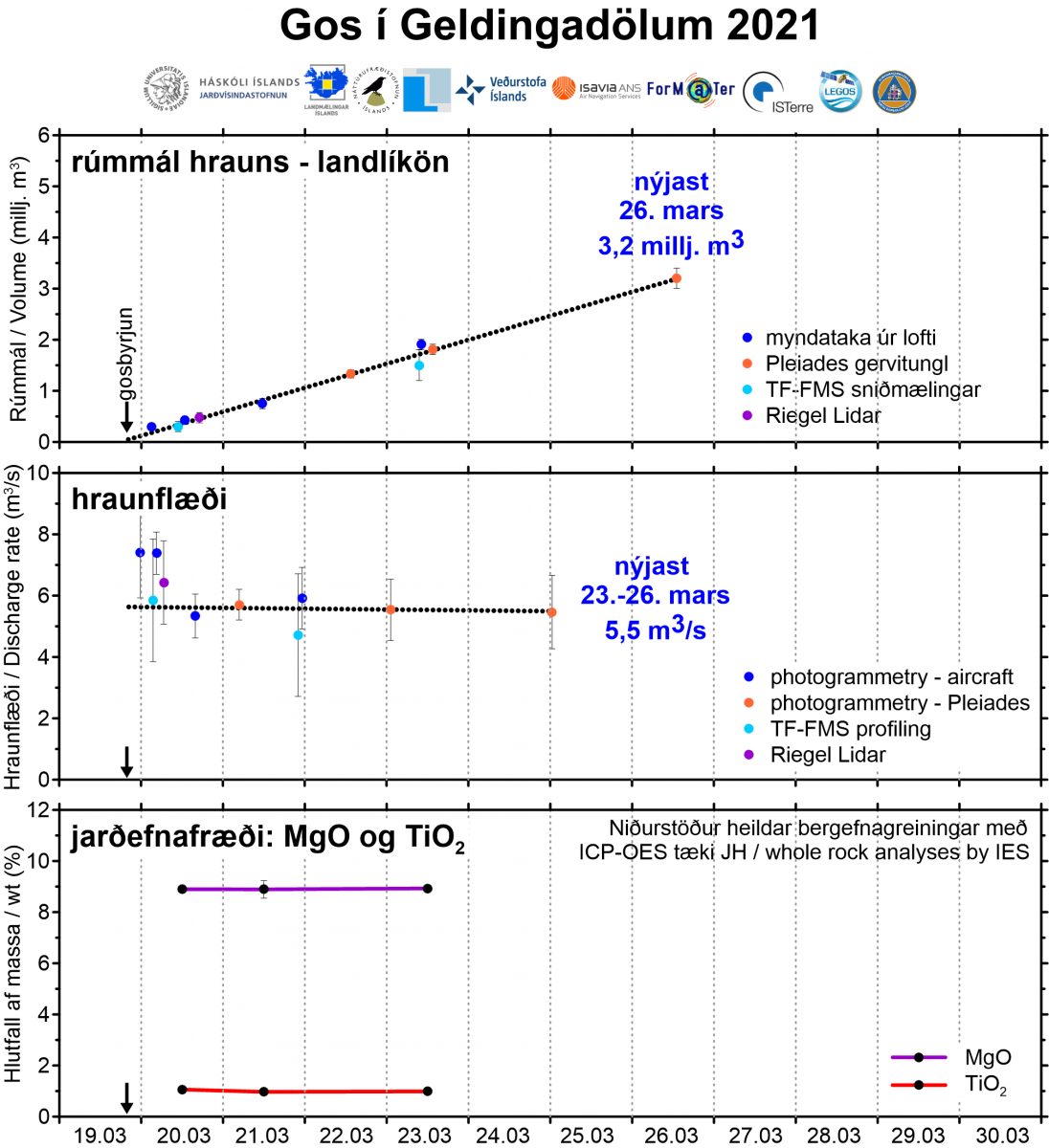 Total rock chemical analyzes were carried out with the ICP-OES (Inductively Coupled Plasma - Optical Emission Spectroscopy) tool from the Institute of Earth Sciences. They are carried out on samples of lava taken at regular intervals. In this process, streams of LiBO 2 are added to crushed rock samples, their melting point decreases as a result and they therefore easily melt at 1000 ° C. The melt forms glass at the rate of cooling. The glass is dissolved in an acidic mixture, which is then measured directly. This method makes it possible to analyze all the main materials of the rock as well as certain trace elements.

The graph shows the percentage by weight (% by weight) of magnesium oxide (MgO) and titanium oxide (TiO 2) in the magma. It is important to follow the evolution of the magma over time and these measurements will be carried out regularly during the eruption, in the same way as the volume measurements and calculations of the lava flow.

To date, there has been no change in the chemical composition of the total rock samples. These measurements indicate that the magma originated from a deep magmatic reservoir, which probably lies near the crustal and mantle limit below the Reykjanes Peninsula. " 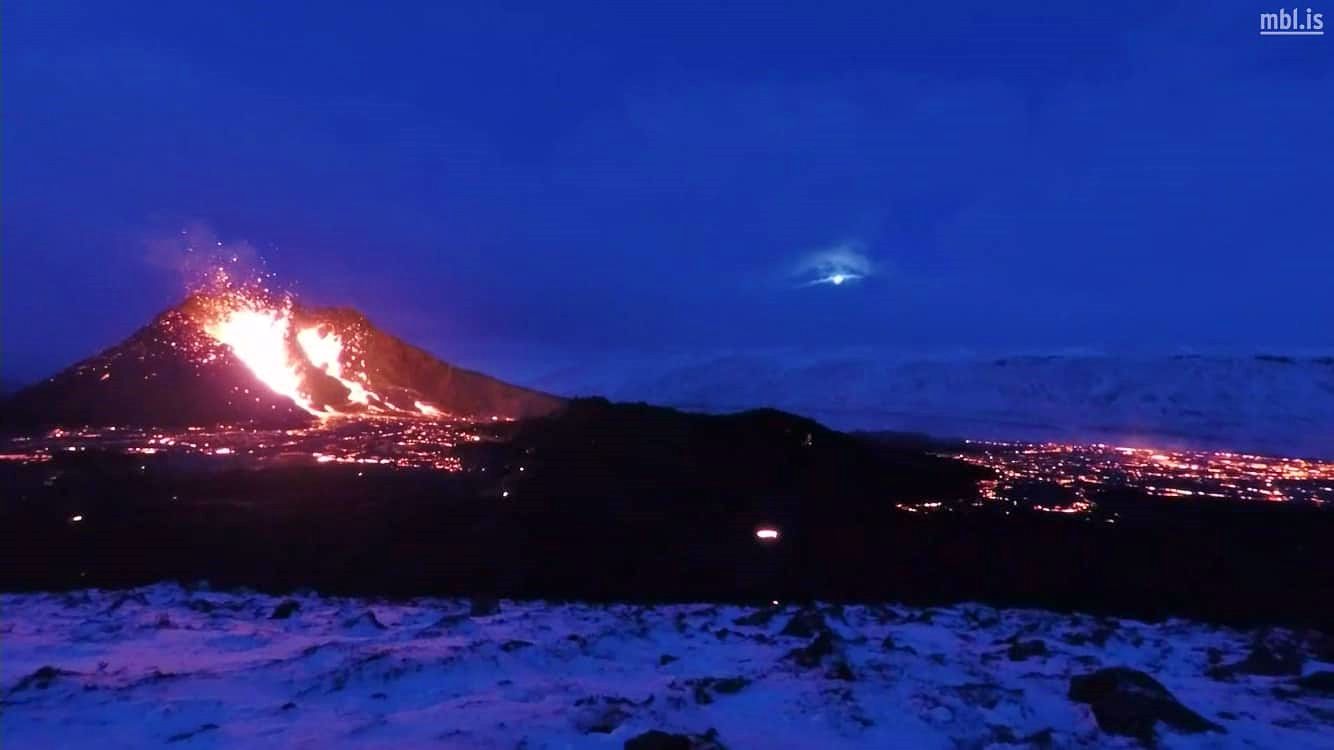