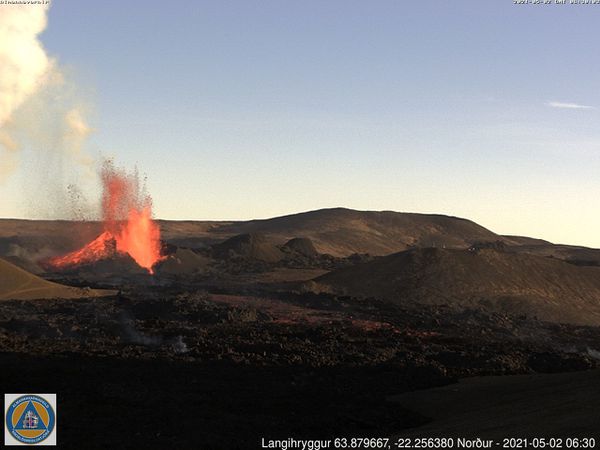 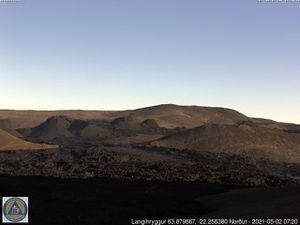 Changes in activity have been observed since 1 a.m. on May 2, with pulsating activity in the lava fountain at Crater # 5 in Geldingadalur, also reflected in the seismic tremor.

It is characterized by stops of about 3 minutes, then increases with great force and jets higher than before (about up to 300 m. In height), an activity that lasts about 10 minutes.
“The gas, which is released from the magma, does not flow like it has so far, but it seems to come with certain impulses in the system. Something is delaying the rise of gas for a while, and then the pressure builds up, to form these large jets of magma that we are examining, ”explains Þorvaldur Þórðarson, professor of volcanology.

This volatile phase was maintained during the day of the 2nd, the night and the morning of May 3rd. At Pacaya, no good visibility on the Mackenney summit cone.

The effusive activity, starting from the crack on the northwest flank, feeds the lava flow; it descends for about 1,800 meters.

The internal tremor is perceived, associated with the ascent of magma, the movements of the lava flow and the emanation of gases. At Piton de La Fournaise, the eruption that began on 04/09/2021 at 7 p.m. (appearance of the tremor) continues. The intensity of the volcanic tremor (indicator of a surface lava emission) has stopped its slow decrease and has been relatively stable for three days now.

Over the past 24 hours, 4 superficial volcano-tectonic earthquakes (between sea level and the surface) have been recorded, all located directly above the summit craters.

The CO2 fluxes in the soil are always increasing in the far field (Plains region). A slight inflation (swelling) of the summit area and the base of the terminal cone seems to be emerging. This parameter will be monitored over the next few days because it may correspond to the pressurization of the superficial magmatic reservoir located under the summit and could suggest a deep magma flow entering the superficial magmatic reservoir greater than the outlet flow of the reservoir which supplies the eruptive site.

The improvement in weather conditions on site since last night has made it possible to observe the eruption from Piton de Bert and more generally from the rampart on the Enclos Fouqué. We can distinguish, the two vents, a more intense plume on the vent located most downstream, the flow from the eruptive site and up to the break in slope, as well as the smoke produced by the fire present at the foot of the rampart. at the level of the Nez Coupé du Tremblet.

Improved weather conditions made it possible to estimate the lava flow by satellite imagery. Surface flows estimated from satellite data via the HOTVOLC platform (OPGC - Clermont Auvergne University) remain below 8 m³ / s. However, the lava flow, now largely tunneled, probably leads to an underestimation of this flow. Note, since this morning the presence of a fire in the vegetation located at the foot of the cut nose of Tremblet. There was an eruption from Mount Ili Lewotolok, on Lembata / east of Nusa Tenggara, on Sunday May 02, 2021, at 4:27 PM WITA with the height of the ash column observed ± 500 m above the peak (± 1923 m above sea level). We observe that the ash column is white to gray with a moderate intensity towards the west. This eruption was recorded on a seismograph with a maximum amplitude of 6.4 mm and a duration of 15 seconds.

The activity level is 3 / siaga, with a prohibited zone of 3 km.