From approximately 11:34 UTC on May 20, we observe the resumption of Strombolian activity at the southeast crater of Etna.

The forecast model indicates the dispersion of the eruptive cloud in the SE direction. The temporal trend of the mean amplitude of the volcanic tremor shows a positive trend which is always maintained in the range of mean values. The tremor sources are located near the SE crater at a depth of about 2.8 km a.s.l. The rate of occurrence of infrasonic events is low. Signals from GNSS networks and clinometric stress monitoring do not show any significant change.

At around 01:00 UTC on May 21, Strombolian activity in the Southeast Crater turned into a lava fountain. The forecast model indicates the dispersion of the eruptive cloud in the SE direction.
From the seismic point of view, the average amplitude of the volcanic tremor is further increased by going from the average level to the high level. The sources are located near the south-eastern crater at about 2800 m above sea level. Infrasound activity is also supported both in the rate of occurrence and in the energy of events with sources mainly located in the south-eastern crater area. The eruption that began at Piton de La Fournaise on 04/09/2021 at 7 p.m. (appearance of the tremor) continues. The amplitude of the volcanic tremor (indicator of an emission of lava on the surface) continues its slow decrease initiated since May 2, even if since last night the data have been strongly disturbed by the very bad weather conditions on site and by the passage of gas-pistons. (Ndlr :This phenomenon is a marker of the end of an eruption.)

Over the past 24 hours, 3 superficial volcano-tectonic earthquakes (between sea level and the surface) have been recorded, located directly above the summit craters.

The CO2 fluxes in the soil are always increasing in the far field (Plains region). The inflation of the edifice continues.

Due to the very bad weather conditions on site, no observation of the eruptive site could be made on May 20, 2021 and May 21 in the morning.

A large river of lava began to flow this afternoon behind the eastern earth wall built to divert lava during the Fagradalsfjall volcanic eruption.

"There is now glowing lava all over the wall," confirmed engineer Verkis Hörn Hrafnsdóttir.
The South Iceland Volcanoes and Natural Disasters group posted on social media this afternoon, explaining that lava flows beneath the hardened surface can lead to the sudden creation of lava puddles. Fagradalsfjall - diagram showing the frequency content of the seismogram as a function of timece 20,05,2021. The rhythmic lava fountain is clear as well as the spectral slip lines at higher frequencies, probably from a helicopter. - Doc. Kristín Jónsdóttir / IMO The eruption of Mount Ili Lewotolok continues, with Thursday, May 20, 2021, at 9:58 a.m. WITA an explosion, accompanied by an ash plume observed ± 500 m above the peak (± 1923 m above the level of the sea). We observe that the ash column is white to gray with a moderate intensity towards the west. This eruption was recorded on a seismograph with a maximum amplitude of 21.6 mm and a duration of 23 seconds. 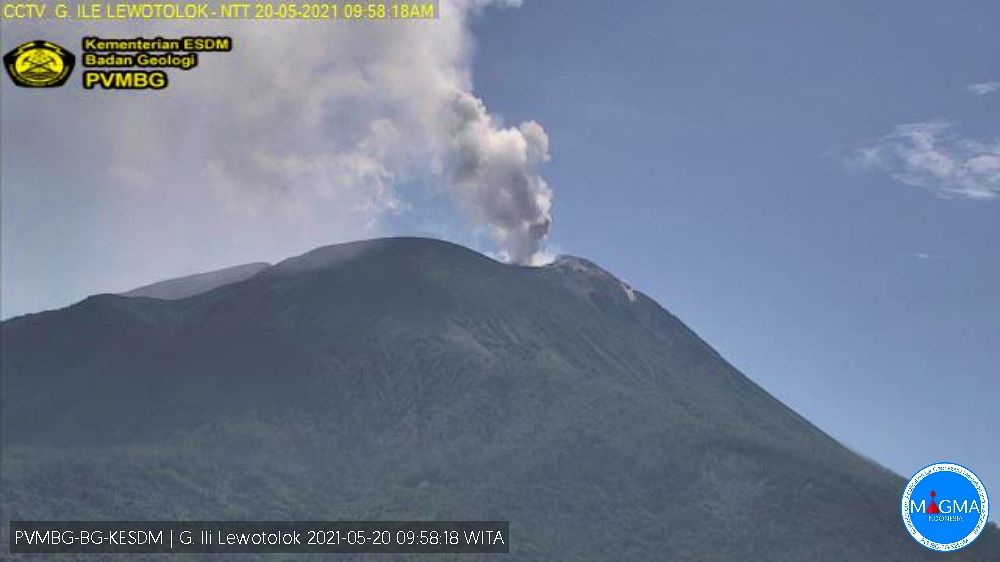