At Etna, during the week of May 10 to 16, the INGV observed degassing of summit craters and episodic Strombolian activity at the southeast crater accompanied by light ash emissions on May 10 and 16, 2021.

The infrasound activity is low. .

No significant variations in the time series of soil deformation monitoring networks.

Thermal activity in the summit area is at a low level.

The flow of SO2 at a medium-low level; the CO2 flux from the soil shows average values. The partial pressure of dissolved CO2 in groundwater reaches background values. Quite surprisingly, around midnight (local time) on the 19th, the ′ ′ saddle mouth ′ ′ reactivated at the Southeast Crater, and until dawn it put on a sublime spectacle, without the drama of the paroxysms of February-April, instead It was almost sweet, tender. From the seismic point of view, the average amplitude of the volcanic tremor showed a sudden increase reaching high values. The sources of the quake are located near the SE crater at a depth of about 2.5 km above sea level

Certainly, a little ash and lapilli were scattered on the eastern slope of the mountain; Southeast Crater (CSE) lava fountains activity stopped at 5:12 UTC. The lava flow which has expanded in the SW direction appears to be poorly fed.

From a seismic point of view, the amplitude of the volcanic tremor decreases, currently fixing at an average level. 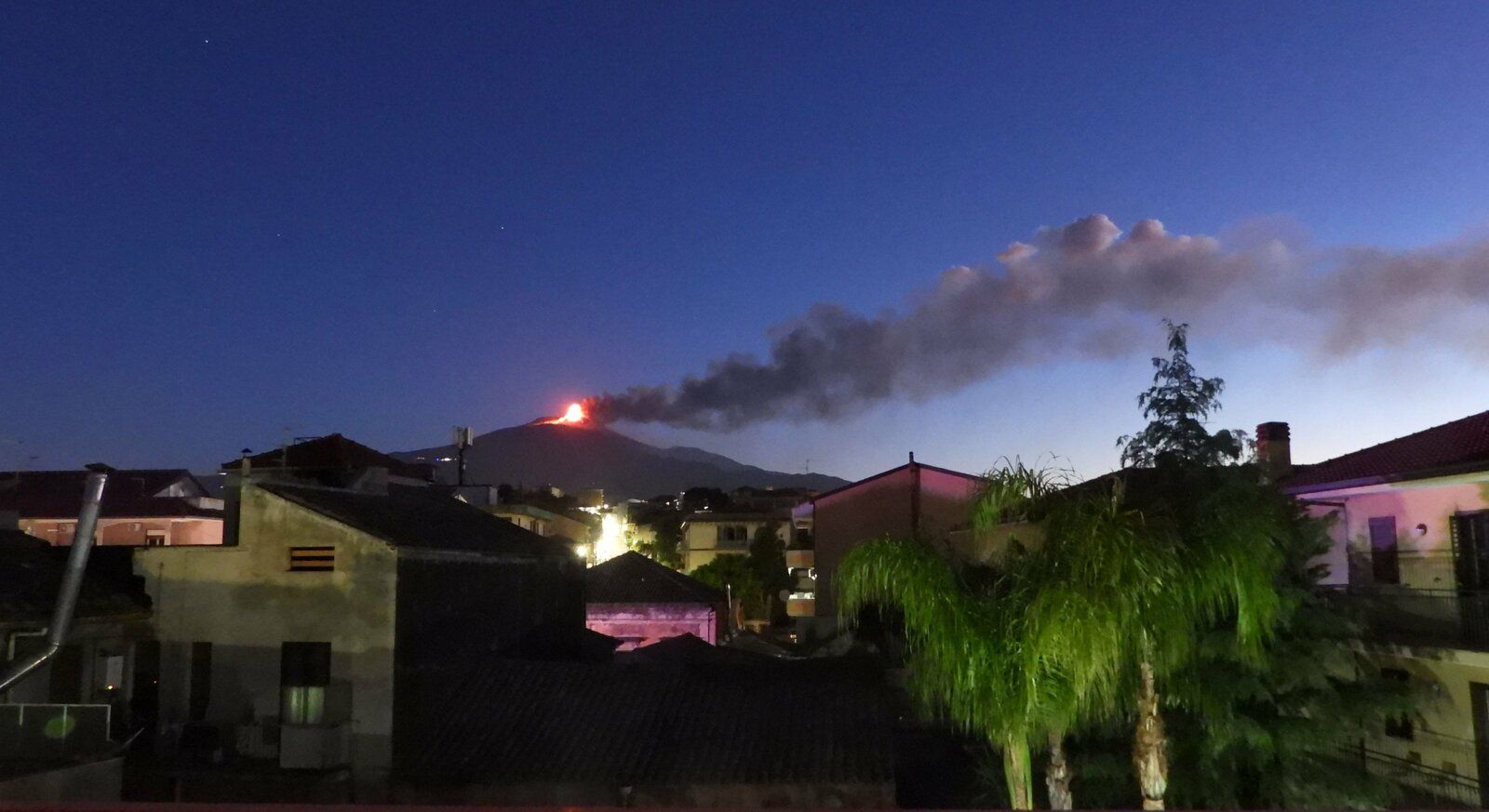 In the Aleutian volcanic arc, the Semisopochnoi aviation color code changed from yellow to orange, after the detection of several small explosions by the local infrasonic network on May 18 and small ash clouds observed by satellite on May 17 from 3:21 p.m. local / 11:21 p.m. UTC. After the activity of May 13-14, the Sinabung erupted on Wednesday May 19, 2021, at 4:48 a.m. WIB with the height of the ash column observed ± 3500 m above the peak (± 5960 m above the level of the sea). The ash column was observed to be gray with thick intensity to the east and south. This eruption was recorded on a seismograph with a maximum amplitude of 120 mm and a duration of 678 seconds. At Piton de La Fournaise, the meteorological conditions present in the early morning led to the formation of a sheet of volcanic gas in the enclosure.

The images from the OVPF and OVPF / IRT cameras over the past 24 hours show that:

- the two cones are always active with a strong degassing

- the flow of lava at the exit of the eruptive vents, occurs mainly in tunnels up to the upper limit of the large slopes, where resurgences of lava are sometimes visible on the surface;

Three superficial volcano-tectonic earthquakes (between sea level and the surface) were recorded, located directly above the summit craters. -

The CO2 fluxes in the soil are always increasing in the far field (Plains region).

The slight inflation trend of the building observed in recent days is confirmed. Who will win from man or from the volcano?

At Fagradalsfjall, at 2:40 pm a collapse occurred in the crater and a new lava flow began to flow south along the scenic mountain and directly to the dam in the "Nameless Valley".

The lava flow then stopped near the defensive wall without causing any further problems.

The fortifications will now be increased from four meters to eight meters, but the government approved the Civil Defense plan this morning. Twenty million ISK will be spent on building defenses to prevent lava from flowing into Nátthaga. 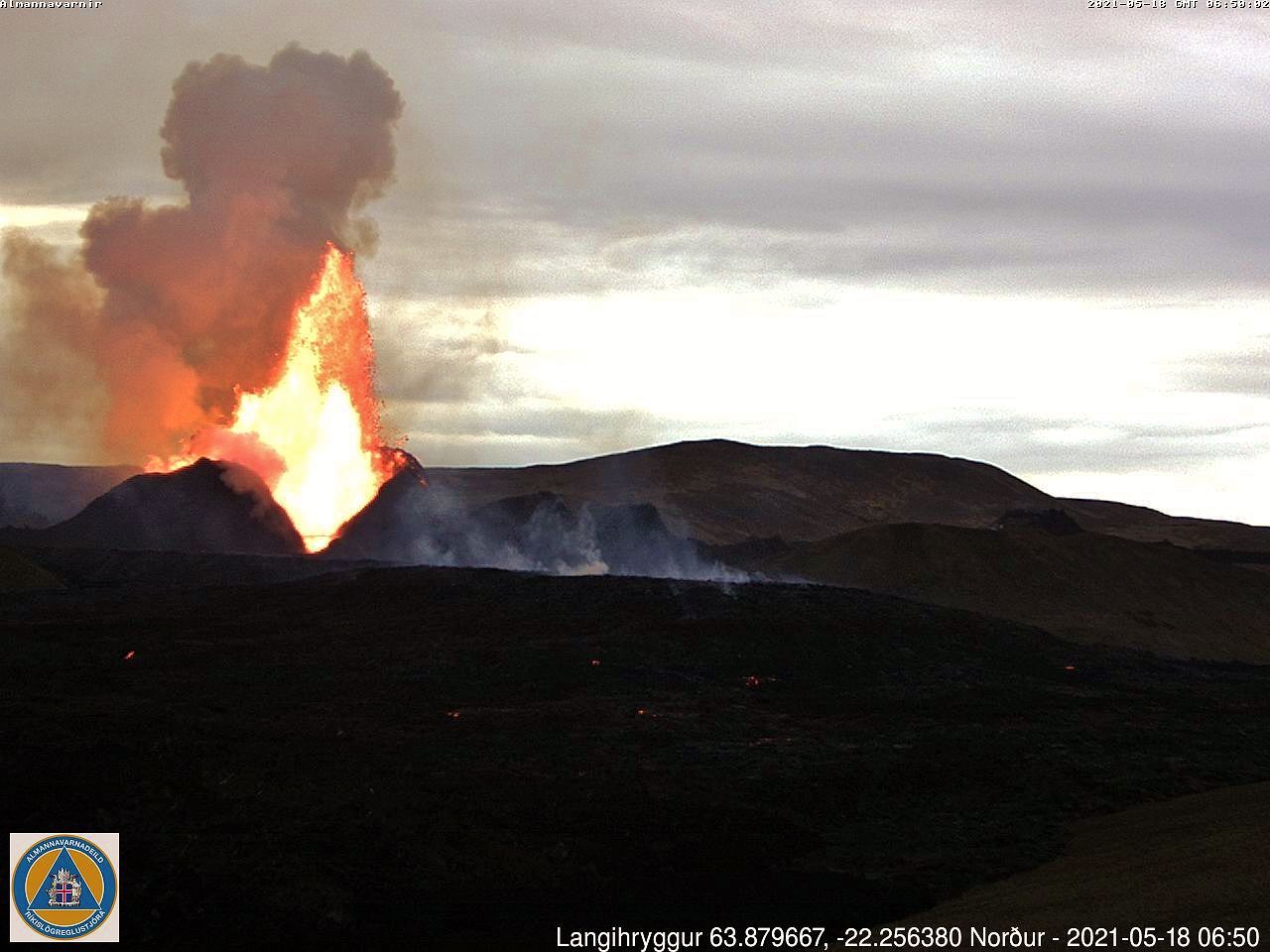 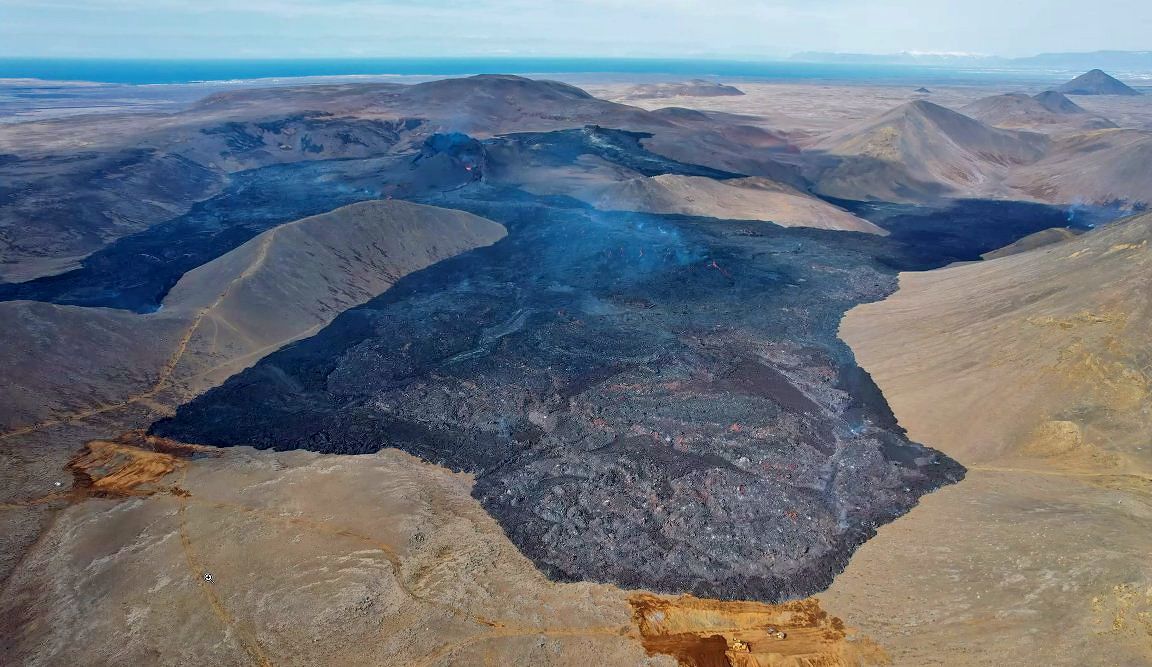 Fagradalsfjall - the eruptive site and the flow zones: on the left: Geldingadalur - in the center: the "Nameless Valley" and the dams - in the background on the right: Meradalur - Doc. Kristín Jónsdóttir

So far, there have been wildfires during the Fagradalsfjall eruptions. They were first seen in early May and have since spread.

On May 10, the area of ​​the fire zone was estimated at 25 ha. It was mainly lava moss / Racomitrium lanuginosum that fell prey to the fire and in which only a few species of seedlings grow little.