Moderate to strong explosions are reported at the Fuego, at a rate of 10 to 14 per hour, accompanied by ash plumes at 4500-4800 m. asl. dispersing west and southwest for 15 km. Ash falls are observed, among others, in the areas of Moralia, Santa Sofiia, and Panimache.

From the crater, avalanches of boulders move towards the main barrancas.

Due to heavy rains, lahars can also affect these drainages On 16.5.2021, the orbit of the LANDSAT-8 USGS satellite and NASA covered the Reykjanes peninsula and a very good image was obtained of the eruption sites at Geldingadalur.

The scanner on board the satellite is sensitive to many wavelengths, allowing users to view various properties of the Earth's surface. Looking in particular at central and near infrared radiation, it is possible to distinguish between craters, lava flows, edges of active lava, and other surfaces. Today's photo clearly shows the intensity of activity in Geldingadalur, the “anonymous” valley and Meradalur. 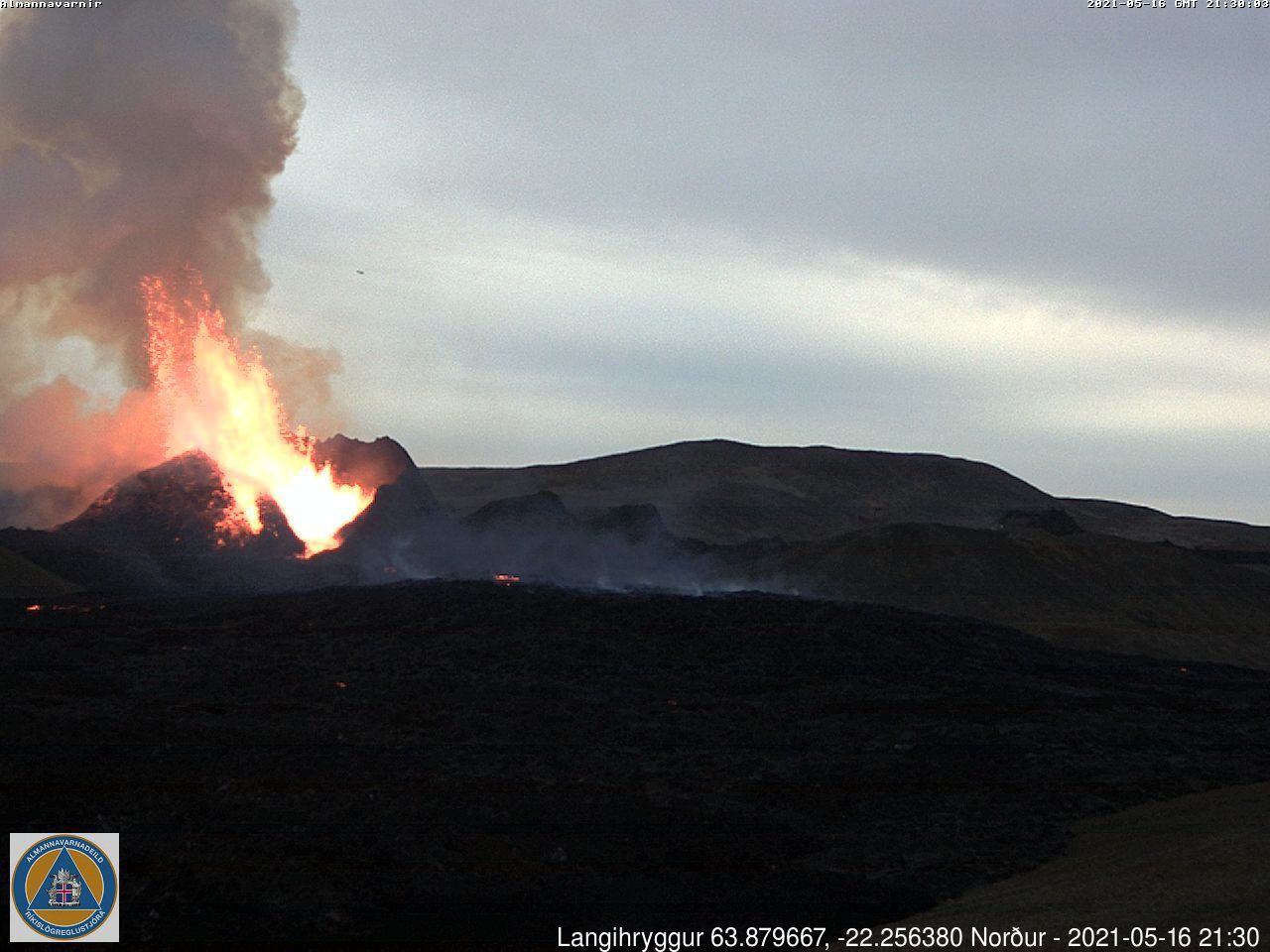 There is a new surface break in the northern part of Geldingadalir, which appeared through an inflation gap around 9 a.m. and which initially developed quite rapidly. The inflation gap began to form last night, highlighted by glowing lava, and demonstrates that there is molten lava beneath the solidified lava surface in Geldingadalir. This molten lava core is likely maintained by fountain-fed lava that surges through the SW breach in the crater ramparts during each fountain episode.

An overflow of the lava flow faces south from the main lava river, and has since flowed into the southern part of Geldingadalir. The advance of this lava branch has increased dramatically over the past two days - perhaps in response to the lava dams that have been erected at the southern end of the "Nameless Valley"? The construction of the dam continues.

At around 5:47 p.m. on May 16, a collapse of the inner wall of the active crater could be observed, underlined by a small darker plume.

In Papua New Guinea, VAAC Darwin reported an ash plume at the Langila volcano on May 15 at a flight altitude of 070, or about 2,100 meters (based on Himawari-8 images).

Frequent light to moderate explosive eruptions with ash emissions and lava flows have been recorded since the 19th century from three active craters at the top of Langila, which is a cluster of four small, overlapping basaltic-andesitic composite cones at the western tip of New Britain.

At Piton de La Fournaise, the amplitude of the volcanic tremor (indicator of an emission of lava on the surface) continues its slow decrease that began on May 2.

The images from the OVPF and OVPF / IRT cameras over the last 24 hours show that:

- the two cones are still active with a strong degassing ;

- the flow of lava at the exit of the eruptive vents, occurs mainly in tunnels up to the upper limit of the large slopes, where resurgences of lava are sometimes visible on the surface;

Over the past 24 hours, 2 superficial volcano-tectonic earthquakes (between sea level and the surface) have been recorded, located directly above the summit craters.

The CO2 fluxes in the soil are always increasing in the far field (Plains region). A slight inflation trend in the summit area is again recorded.