With a fairly high seismicity on May 19, characterized by 169 volcanic earthquakes and 139 tremor episodes, a rise in volcanic fluids was observed at Taal volcano, generating a plume of 300 m. at 2,000 meters high, May 20, drifting southwest.

Sulfur dioxide emissions were around 3,050 tonnes / day on May 20. The seismicity of the 20th was down with 10 volcanic earthquakes and 8 tremor episodes.

The water temperature of the main crater is 71.8 ° C and the pH is 1.59 (measurements of March 4). Slow but constant inflation is measured by GPS and interferometry, as well as an expansion of the Taal region is still recorded since January 2020.

On May 21, the Taal volcanic network did not detect any volcanic earthquakes, but low-level background tremors have persisted since April 8, 2021. Activity at the main crater was dominated by upwelling volcanic fluids hot in its lake that generated plumes up to 1.5 kilometers high before drifting southwest. Sulfur dioxide emissions averaged 3,426 tonnes / day on May 21, 2021.

Alert Level 2 (Increased Agitation) is currently maintained on Taal Volcano, but high unrest is recurring and volcano conditions remain unstable. DOST-PHIVOLCS reminds the public that at Alert Level 2, sudden steam or phreatic explosions, volcanic earthquakes, minor ash falls and fatal accumulations or expulsions of volcanic gas can occur and threaten areas in and around TVI.

Kilauea / Halema'uma'u - the active lava surface is limoted to a small pond near the eastern fissure, mostly covered by a stationary crust; lava abruptly resurfaces with bubbles (right image) for a few minutes - photos M.Patrick - USGS 05.2021 - a click to enlarge

In Kilauea, the lava outflow from the west vent continues to feed the Halema'uma'u lava lake into the crater through a submerged entrance. Lava flow and intermittent crustal sinking are confined to a small basin with rare overflows, and lava has not seeped along the lake's perimeter over the past week.

The total lake depth is 229m on May 20, 2021, measured by a continuous laser range finder over the western part of the lake near the western vent area, and is unchanged since May 11. The lava crust is stagnant and solidified covering 99% of the surface of the lake measured by thermal mapping on May 13.

Active surface lava at Halema'uma'u, atop Kīlauea, is now limited to a small lava pond near the Western Fissure. Normally the lava pond is covered with a stationary crust, as shown in the image below left. Sometimes the pond abruptly resurfaces with flowing lava, with sinking crustal plates and profuse bubbling, shown in the image on the right. The re-surfacing process only takes a few minutes.

The inclinometers installed at the summit have registered minor changes over the past 24 hours. Seismicity remains stable, with high tremors. 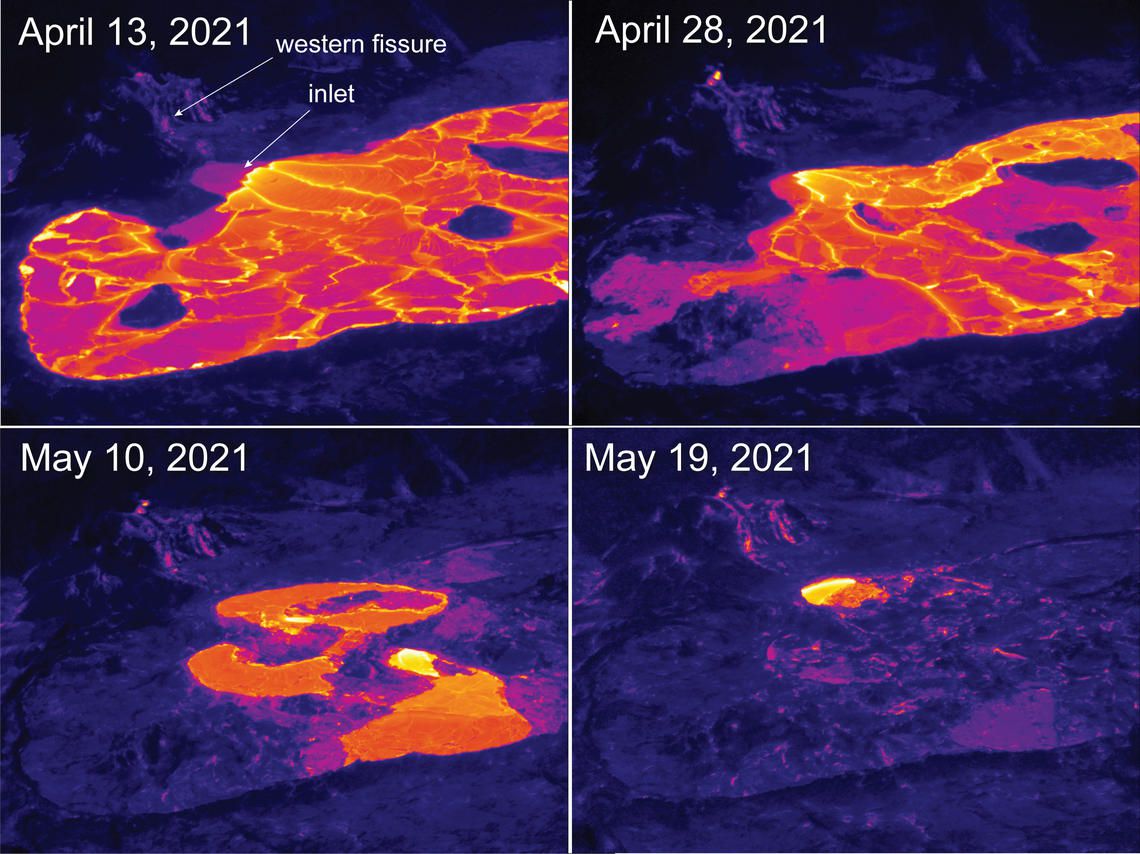 Kilauea / Halema'uma'u - evolution of Lake Halama'uma'u between April 13 and May 19, 2021 - thermal camera images by M. Patrick - USGS - one click to enlarge

La Fournaise has not said its last word: the eruption that began on 04/09/2021 at 7 p.m. (appearance of the tremor) continues. Since yesterday a slight increase in the amplitude of the volcanic tremor (indicator of an emission of lava on the surface) accompanies the gas-pistons. The processing of the consistency data of the InSAR satellite data shows that the flow contours changed very little between May 7 and 16, confirming the drop in activity and activity focusing mainly on lava tunnels. The lava tunnel activity promotes the thickening of the existing lava field rather than its spread.

Over the past 24 hours, 2 superficial volcano-tectonic earthquakes (between sea level and the surface) have been recorded, located directly above the summit craters.

The CO2 fluxes in the soil are always increasing in the far field (Plains region). The inflation of the edifice continues. Piton de La Fournaise: Evolution of the contours of lava flows over time. The contours were determined from the processing of aerial images by stereophotogrammetry or by analysis of coherence data from InSAR acquisitions (© OVPF / IPGP-OPGC-LMV-OI2 / ISDeform). - one click to enlarge

On the afternoon of May 20, surveillance cameras show that the flow along Stromboli's Sciara del Fuoco is still fed. In addition, the projection / spattering activity continues in the North sector and sometimes also in the Center-South sector. 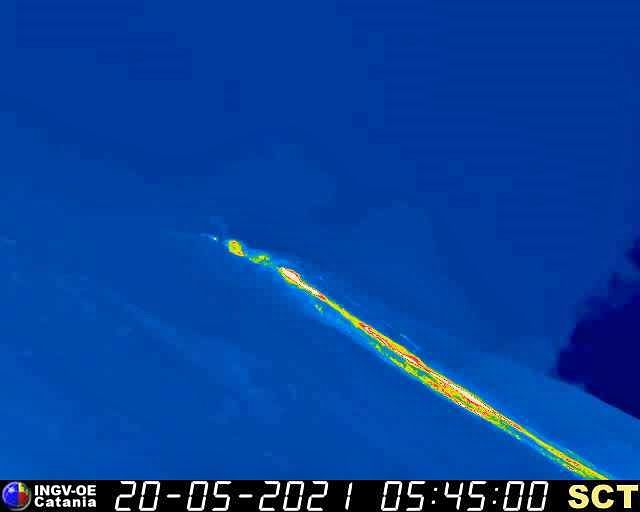 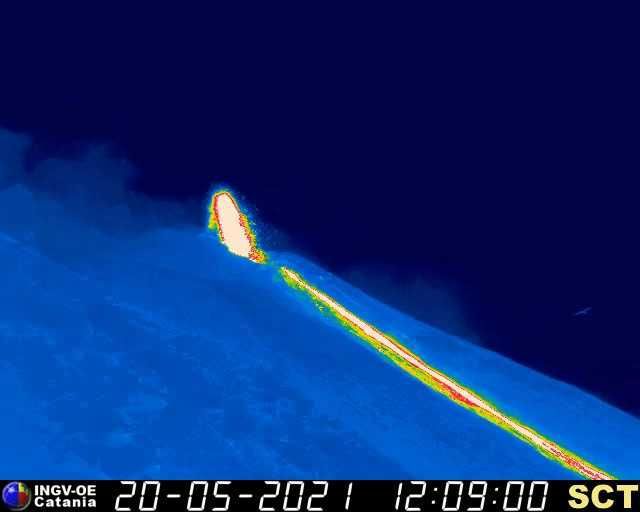 This activity continued at the very start of the day on May 21.
Discontinuous explosive episodes are observed at more intense times.
The tremor tendency continues to show oscillations between medium-high and medium-low values. Regarding the magnitude of the explosion earthquakes, there is a slight upward trend compared to what had been observed previously. (INGV 21.05 / 00:30 local time)
No significant change is observed in soil deformation signals from GNSS and clinometric networks.

In the middle of the morning, the INGV reports that the flow along the Sciara del Fuoco is less fed and the most advanced front no longer reaches the coast, and is located at about 300 m altitude. The projection / spattering activity continues in the North and Center-South sectors. Discontinuous explosive episodes are observed at more intense times.
The tremor trend showed mostly medium-low values. In the seismic trace, explosive events of modest amplitude are recognized.
Signals from GNSS networks and clinometric soil deformation monitoring do not show significant changes.