The PVMBG recorded a short-lived phreatic eruption on April 29 at 6:25 p.m. local time at the Sileri crater, located on the Dieng plateau, on Java.
Pyroclastic material in the form of rock and mud was ejected to a height of approximately 400 meters in various directions. Seismic activity accompanied this event lasting approximately 109 seconds with a maximum amplitude of 42.7 mm.
The warning bulletin states that phreatic explosions could occur with little or no warning and could affect an area approximately 500m away from Sileri Crater.
Phreatic explosions occur when groundwater comes in contact with hot volcanic rock and not necessarily molten magma, meaning that no new magma has erupted or is still in the conduit.
The last phreatic eruption of the volcano occurred on April 1, 2018.

Locals and tourists are recommended not to approach the Sileri crater at a distance of 500 meters from the edge of the crater.
The community should not carry out activities in Kawah Timbang, due to the threat of dangerous CO2 and H2S gases which are harmful to life.
The community must be vigilant if they dig the soil around the Kawah Timbang to a depth of more than one (one) meter as it could be potentially threatened by the dangers of CO2 and H2S gases. From 23 to 29 April, 12 avalanches of incandescent blocks of are produced at Merapi, with a sliding distance observed up to 2000 m in the south-west and 700 m in the south-east, recorded on a seismogram with a maximum amplitude of 58 mm and a duration of 163 seconds.

Morphological analysis of the peak area based on photos of the southeast sector from April 28 to April 22, 2021 shows that the volume of the central dome is 1,794,000 m³. G. Merapi's deformity monitored by EDM this week showed a distance shortening rate of 0.5 cm / day. 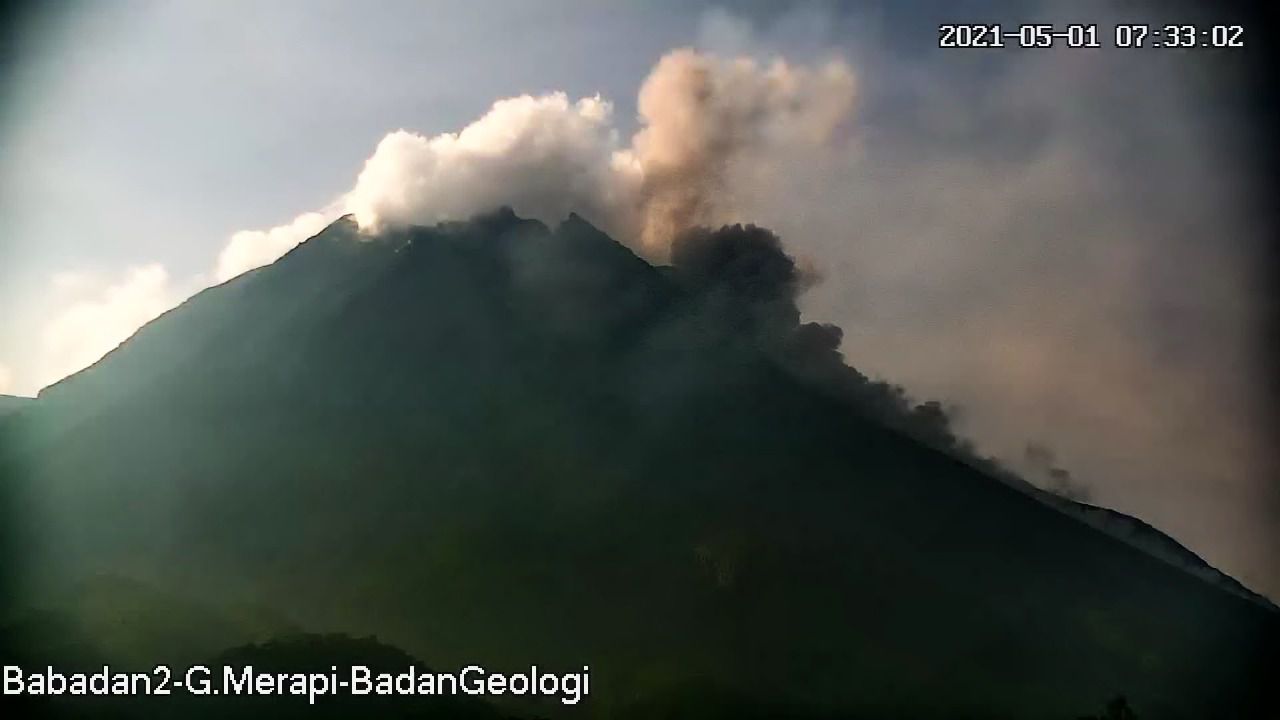 This May 1, 2021 at 7:31 am WIB, a pyroclastic avalanche flow was recorded on a seismogram with an amplitude of 45 mm and a duration of 91 seconds; it traveled a distance of 1300 to the southwest.

Current potential hazards in the form of lava avalanches and hot clouds in the south-southwest sector include the Yellow, Boyong, Bedog, Krasak, Bebeng and Putih rivers for up to 5 km and in the southeast sector. , the Gendol river for 3 km. At Pacaya, weak to moderate degassing is observed at Mackenney crater. At the new crack, degassing accompanied by a turbine sound and weak explosions are reported continuously. The northeast flank lava flow continues to advance in a westerly and southwest direction, in the area known as La Breña.

The eruption that began on 04/09/2021 at 7 p.m. (appearance of the tremor) at Piton de La Fournaise continues. The intensity of the volcanic tremor (indicator of a surface lava emission) halted the slow decline that began four days ago.

Over the past 24 hours, a single superficial volcano-tectonic earthquake (between sea level and the surface) has been recorded, located directly above the summit craters.

CO2 fluxes in the soil are still increasing in the far field (Plaine des Cafres).

Averaged over the past few days, no significant trend can be seen in the deformations of the building (neither in deflation nor in inflation). This could suggest a deep magma flow entering the shallow magmatic reservoir equivalent to the outflow from the reservoir that feeds the eruptive site.

Due to the bad weather conditions on site, no flow estimate could be made in recent days.