Activity of Etna and Taal - news from Nyiragongo and Fagradalsfjall.

From approximately 11:30 UTC on June 12, 2021, an increase in the intensity and frequency of Strombolian activity is observed at the level of the southeast crater of Etna, which produces a discontinuous ash emission which is scattered in the summit area.
From approximately 11:30 UTC, the average amplitude of the volcanic tremor showed a clear increase and around 12:15 UTC, it reached the high range; At present, the parameter still shows a clear increasing trend. The centroid of volcanic tremor sources is located in the area of ​​the southeastern crater at an altitude of 2900-3000 m above sea level. At the same time, infrasonic activity has also intensified and shows a clear trend of increase, both in terms of the rate of occurrence and in the energy of infrasonic events, which are located in the south-eastern crater. A further increase in Strombolian activity at the southeast crater is observed from around 12:50 UTC. According to the forecast model, the eruptive cloud produced by this activity disperses in the SW direction. From around 7:30 p.m. the Strombolian activity of the southeast crater passed to a lava fountain. Based on the forecast model, the eruptive cloud produced by the current activity disperses to the south. As for the lava overflow, it is well fed and its front has reached an altitude of about 2800 m above sea level. In addition, an additional flow is observed which extends in an easterly direction and which around 19:00 UTC reached the upper western edge of the Bove valley.

From around 21:15 UTC, the mean amplitude of the volcanic tremor showed a rapid decrease and reached the base of the high value range around 22:50 UTC. Currently, this parameter shows a new downward trend.

At 11:16 pm we observe that the lava fountain of the southeast crater has ceased; instead, Strombolian activity continues.
The eruptive cloud produced during the fountain dispersed towards the SSE and news of a fallout of volcanic material was received at the Sapienza refuge. Lava overflows are reported.

The decrease in the average amplitude of the volcanic tremor, reported in the same press release, also continued in the following hours and around 00:30 the parameter reached the range of low values. Currently, the amplitude of the tremor shows a stationary trend within this level. The center of gravity of the springs
of the volcanic tremor is located in the area between the Bocca Nuova crater and the southeast crater, at an altitude of 2900-3000 m above sea level. 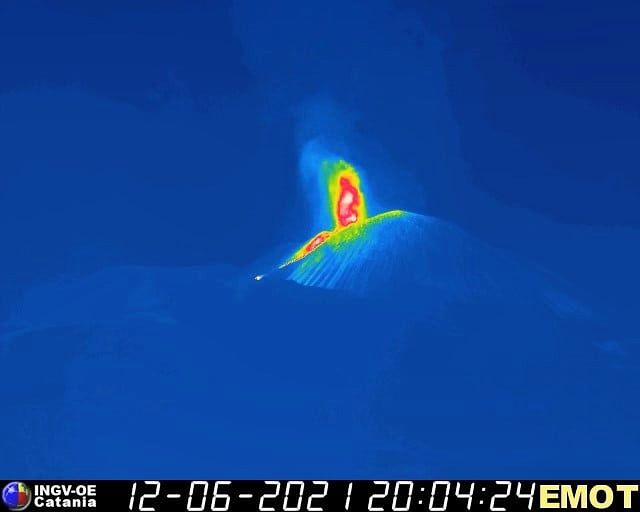 During the past 24 hours, the Taal volcano network has not detected any volcanic earthquakes, however, a low-level earthquake has persisted since April 8, 2021. The activity of the main crater has been dominated by the ascent of hot volcanic fluids in its lake which generated plumes of 1,500 meters high which drifted towards the northwest. Sulfur dioxide (SO2) emissions were on average 9,911 tonnes / day as of June 10, 2021.

The activity of the main crater, dominated by the rise of hot volcanic fluids in its lake, generated plumes 1,000 meters high that drifted southwest and northwest. Sulfur dioxide (SO2) emissions were on average 4,673 tonnes / day on June 11, 2021. " The unprecedented level of sulfur dioxide flux during this period of seismic quiescence warns the public not only of continuing magmatic unrest, but also of the direct impact of volcanic gas on downwind populations and economies. localities around Taal Lake ” the Phivolcs said in an advisory.

Alert level 2 (increased unrest) is currently maintained on the Taal volcano. DOST-PHIVOLCS reminds the public that at Alert Level 2, sudden steam or phreatic explosions, volcanic earthquakes, minor ash falls and fatal accumulations or expulsions of volcanic gas can occur and threaten areas in and around TVI. DOST-PHIVOLCS strongly recommends that entry be strictly prohibited into the volcanic island of Taal, the permanent danger zone or PDZ of Taal, especially the surroundings of the main crater and the Daang Kastila fissure, as well as the occupation and boating on Taal Lake. The authorities of the Democratic Republic of Congo (DRC) have decided to degas the Kabuno golf course on the northwest coast of Lake Kivu after the eruption, last May, of the Nyiragongo volcano, whose contact with carbon dioxide massed in the gulf could kill millions of people in the region.

"The government is in the process of harnessing itself so that the disbursement is done quickly so that the delivery of the material which will allow this degassing to be done as quickly as possible", declared to the Anadolu Agency, Didier Budimbu , Congolese Minister of Hydrocarbons.

He commissioned the French entrepreneur and expert Michel Halbwachs to degas the Kabuno golf course.

“The carbon dioxide in this gulf is less than 20 meters from the surface. It would suffice for there to be a flame, an explosion that will release this gas and if the wind is not favorable and it heads towards Goma, this gas will decimate the population by asphyxiation even in full sleep ”, a he said.

The cost of the work to extract carbon dioxide from this gulf is $ 5.5 million, he estimated.

The lava flow from the Geldingadalur eruption now appears to be heading largely to the eastern part of Meradalur, where the lava field has started to thicken considerably. So the thickness of the lava is 10-12 meters in the valley, but 2-3 meters at the edges.

The thickening of the lava flow occurs in both Geldingadalur and Meradalir. There is less flow to Nátthaga.

Source: Þorvaldur Þórðarson,  Professor of Volcanology at the University of Iceland / via mbls.