The INGV announces that from approximately 20:20 UTC on June 17, 2021, a sudden increase in Strombolian activity is observed at the level of the south-eastern crater of Etna, producing a continuous ash emission which disperses in the summit zone and an overflow which propagates towards the SW. The products of Strombolian activity protrude from the rim of the crater falling along the sides of the crater.

From approximately 23:20 UTC, the Strombolian activity of the southeast crater passed to a lava fountain phase.

This stopped at 00.10 UTC. June 18.
From 8:50 am The INGV reports that from the images of the surveillance cameras, we observe that the explosive activity at the level of the South-East crater has ceased, the lava overflow extending in a south-west direction is cooling. A small thermal anomaly, of VRP 6 MW is reported by Mirova in Kadovar, Papua New Guinea, on June 18, 2021, at the summit of the volcanic island.

Some other anomalies were reported in June, respectively on 10,11,13. In Merapi, on Java, the seismicity of this June 19, from 00h to 12h local, is characterized by:

The current potential danger is in the form of lava avalanches and hot clouds in the south-southwest sector covering the Yellow, Boyong, Bedog, Krasak, Bebeng and Putih rivers for a maximum of 5 km and in the south-eastern sector, the Gendol river. up to 3 km. During this time, the ejection of volcanic material in the event of an explosive eruption can reach a radius of 3 km from the summit. The seismicity of Ili Lewotolok has intensified over the past two days with:

The activity level remains at 3 / siaga.
Communities around Mount Ili Lewotolok and visitors / climbers / tourists are recommended not to engage in activities within 3 km of the summit / crater of Mount Ili Lewotolok. The community of Jontona Village should always be aware of the potential threat of weathered material avalanches which may be accompanied by hot clouds from the southeast peak / crater of G. Ili Lewotolok. 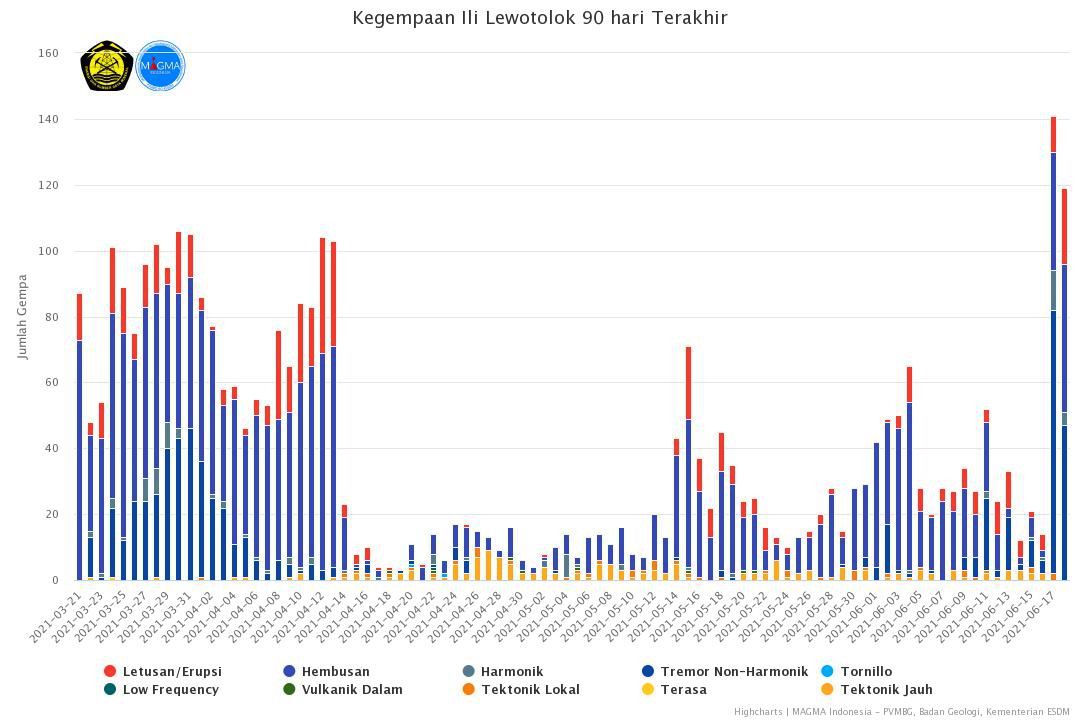