Activity of Etna, Merapi and Suwanosejima.

Etna makes the show with a new eruptive episode on June 24, 2021, which produced lava fountains of three mouths ( " saddle " zone), an overflow of lava towards the southeast, and an eruptive column which reached a height of about 10 kilometers above sea level. After the paroxysm, the effusive mouth was reactivated on the lower south-eastern slope of the South-East Crater, which emits a small flow of wash.

During the night and dawn of June 24, weak effusive activity continued at the open mouths at the southeast base of the southeast crater, which fed a lava flow to the west wall of theValle del Bove with a front at about 2600 m. At dawn today a small stream was bustling near the effusive mouth, a few tens of meters long. 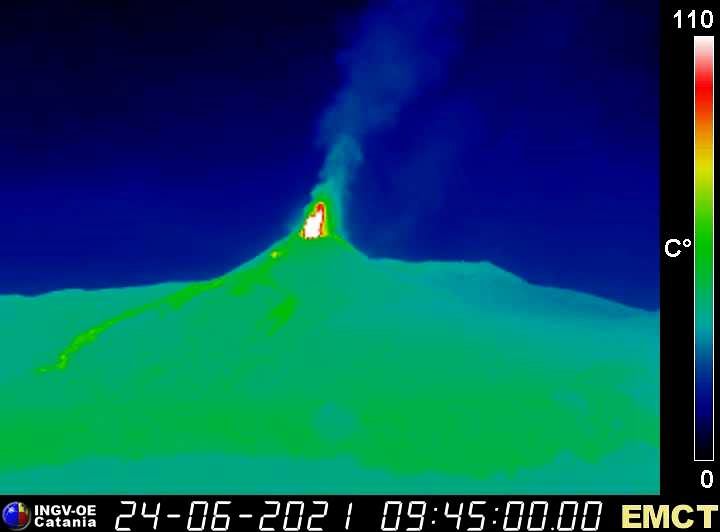 and from 09:05 UTC, there is a resumption of Strombolian activity at the Southeast Crater, which is accompanied by the emission of modest amounts of volcanic ash. In addition, the emission of a small lava flow from the lower southeast flank of the crater continues to the South East.

Strombolian activity at the southeast crater gradually turned into a lava fountain, with at least three explosive vents; at the same time an overflow of lava started in a south-westerly direction.

The activity of the lava fountain at three mouths of the southeast crater produced jets of lava 400 to 500 m high, while the eruptive column reached a height of 9 to 10 km above the level of the sea, the dispersion of the eruptive cloud concerns the East-North-East sector of the volcano. 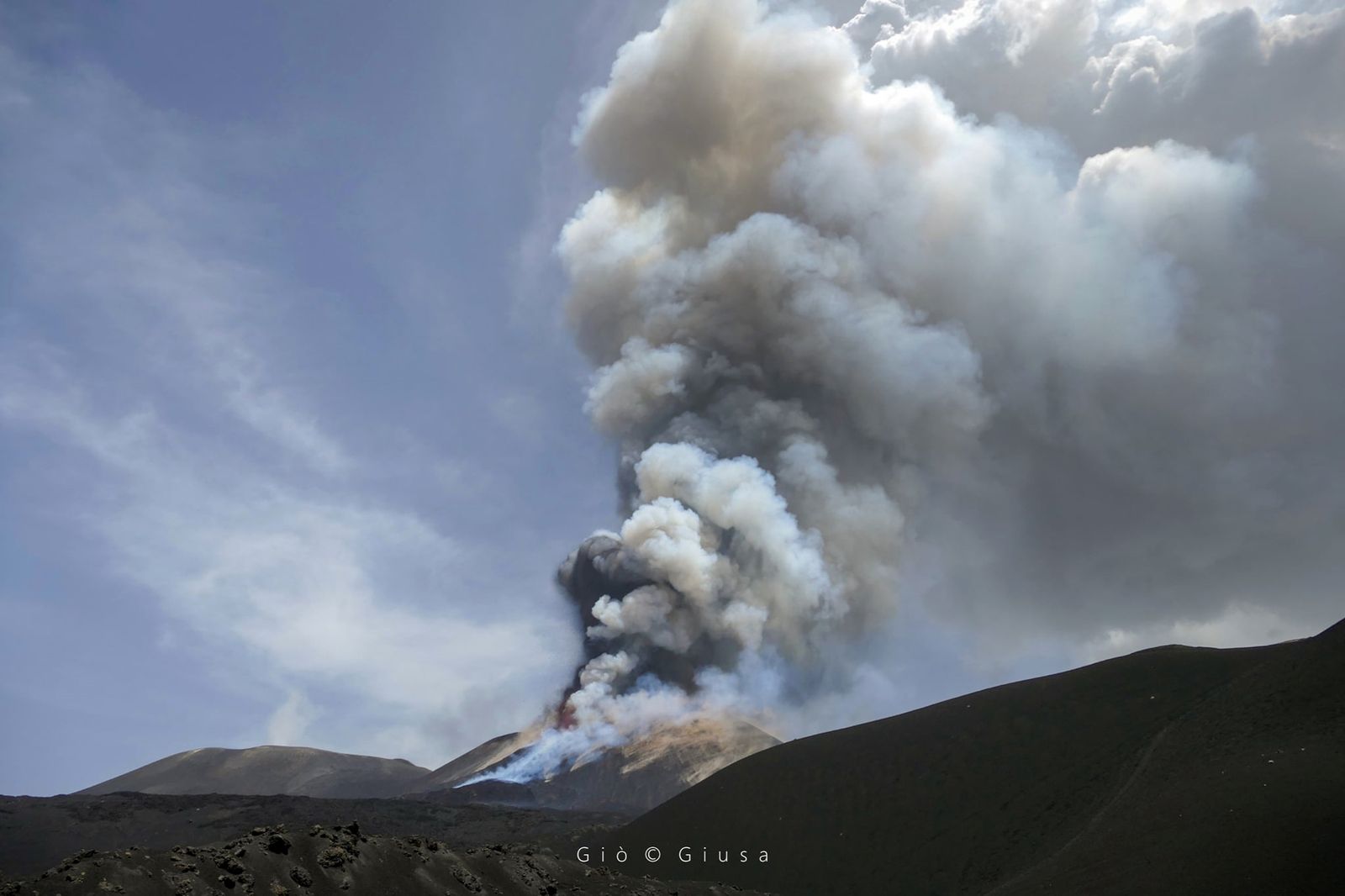 The INGV announces at 10:45 UTC that the explosive activity at the Southeast Crater is decreasing sharply. The lava fountains have ceased; the weak strombolian activity continues accompanied by modest ash emissions. There is an ash fall in the Linguaglossa region (northeast side of Mount Etna).

The southwest-facing lava overflow is still fed ; on the other hand, the small lava flow present on the lower southeast flank of the cone seems to cool down before the start of this eruptive episode.

After the cessation of the explosive activity at the level of the Southeast crater, the gradual reactivation of the effusive vent located at an altitude of about 3050 m. on the south-eastern flank of the cone was observed, with the emission of a small lava flow. This flow reached, at 14:20 UTC, an altitude of about 2800 m, and is slowly moving towards the Valle del Bove.

From 23:50 UTC on June 24, an increase in Strombolian activity is observed at the level of the SE crater. 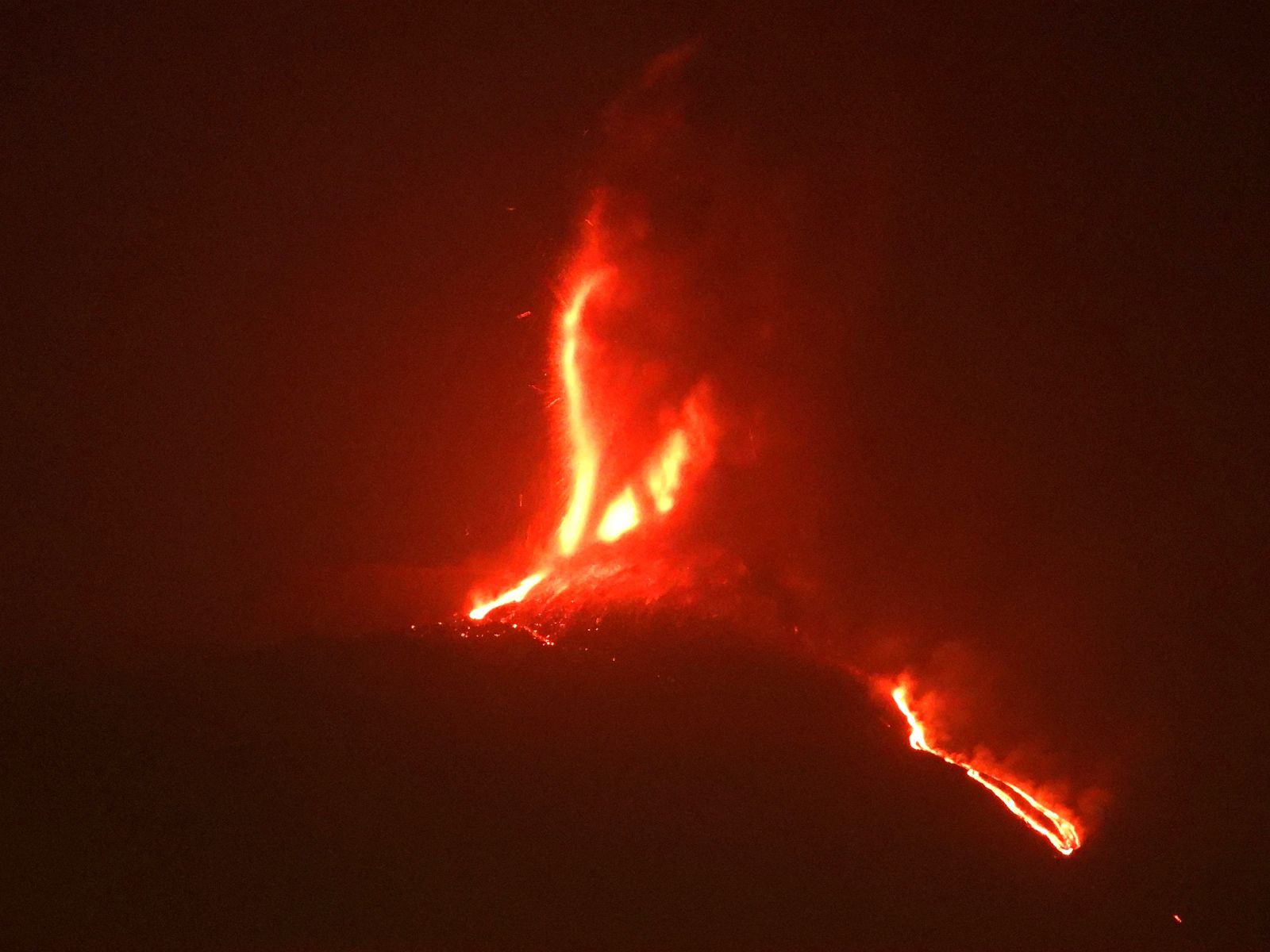 Here we go again ... around 01:00 UTC on June 25, from the surveillance cameras, it is observed that the Strombolian activity of the southeast crater gradually turned into a lava fountain.
From around 01:15 UTC an overflow of lava is also observed which, from the southern slope of the southeast crater, spreads in a southwest direction.
At 01:48 UTC, the southeast crater lava fountain ceased to be active, but there remains weak Strombolian activity. The eruptive cloud produced reached a height of about 8.5 km asl. derived from satellite data and, in accordance with the forecast model, its dispersion concerned the eastern sector of the volcano.

Regarding the lava overflow that has spread to the southwest, its front seems to settle at an altitude estimated at about 2900 m. altitude. On the south-eastern side of the south-eastern crater, the lava flow continues from 3050 m. asl. . The effusive vent feeds two main lava flows, the most advanced front of which is located at an altitude estimated at about 2700 m above sea level.
After the maximum amplitude at 01:30 UTC the volcanic tremor began a rapid descent still in progress After the warm clouds this morning, the seismicity was dominated by avalanches. Ash rains were reported in several places. The public is advised to remain calm, to comply with BPPTKG recommendations and to anticipate disturbances due to volcanic ash such as wearing masks and closing water supplies. 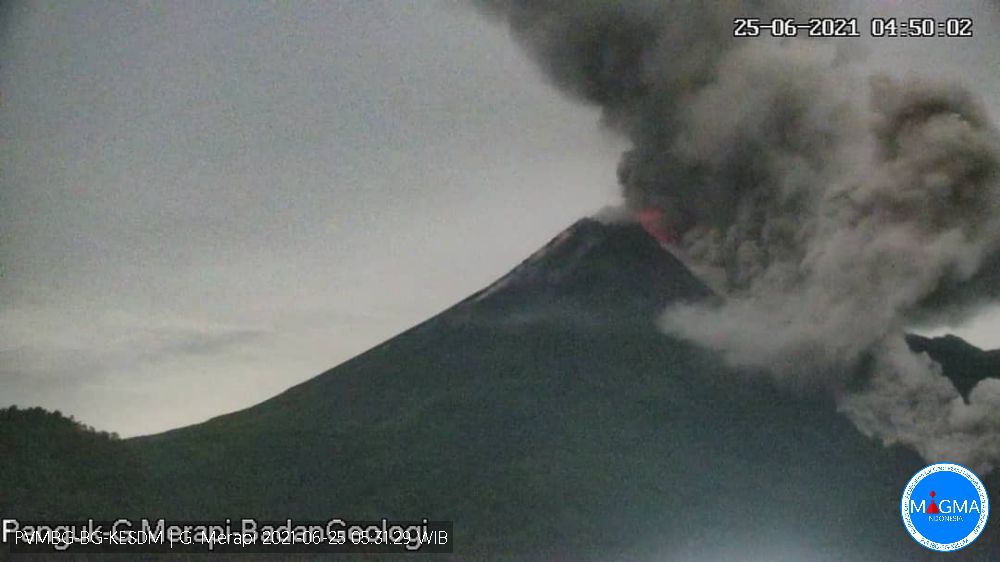 At Suwanosejima Ontake Crater, eruptive activity has become more active as the eruptions are repeated over a long period of time.

The volcanic alert level went from 2 (crater zone regulation) to 3 (mountain entry regulation), with a danger notice within a radius of 2 km. due to projections of volcanic bombs.

At 10:54 p.m. on June 21 and 12:04 a.m. on June 22, the explosions ejected ballistic projectiles. Large volcanic bombs scattered about 900 m. from the crater in the northwest and southeast directions, respectively.

On top of that, multiple volcanic bombs were scattered from the crater several hundred meters away.