This June 4, the INGV reports a weak intracrater Strombolian activity that continues at the south-eastern crater of Etna; the lava overflow generated during the last lava fountain event cools.

In addition, intracrater explosive activity at the Bocca Nuova crater and at the same time occasional ash emissions are observed at the north-eastern crater which disperse rapidly in the summit area.
From the seismic point of view, the mean amplitude values ​​of the volcanic tremor are at a medium-high level, still showing small fluctuations. The centroid of the volcanic tremor sources remains located in the area of ​​the SE crater at an altitude of about 2900 m s.l.m.

Around 13:30 UTC, the images from the surveillance cameras show an increase in Strombolian activity at the level of the Southeast crater. The activity produces discontinuous ash emissions which disperse rapidly near the summit area of ​​the volcano.
From the seismic point of view, from around 13:30 UTC, it is observed that the average amplitude values ​​of the volcanic tremor are at a medium-high level showing a clear tendency to increase. The centroid of the volcanic tremor sources remains located in the SE crater area at an altitude of about 2900 m asl. From around 4:20 p.m. UTC, the passage of Strombolian activity from the Southeast crater to the lava fountain can be observed from surveillance cameras., The eruptive cloud formed by the
Lava fountain, which according to the forecast model disperses in the SE direction, reaches a height of about 6500 m above sea level.

From about 17:00 UTC, we observe a rapid decrease in the average amplitude values ​​of the volcanic tremor, which is placed at a high level with a tendency to decrease.

At around 5:30 p.m. UTC, the lava fountain in the southeast crater gradually depleted. In accordance with the forecast model, the dispersion concerned the south-eastern sector of the volcano. INGV staff in the field report the impact of the products to Aci Castello, Tremestieri and Catania (Ognina). In its report of 21:22 UTC, the INGV announces that the explosive activity at the Southeast crater has ceased, however the lava overflow which extends in the southwest direction; the lava flow is still fed and the flow front is located at an altitude of about 2800 m above sea level. The week of May 28 to June 3 in Merapi / Java, according to the BPPTKG weekly report

Hot cloud avalanches occurred 7 times with a maximum glide distance of 2000 m to the southwest and recorded on a seismogram with a maximum amplitude of 60 mm and a duration of 322 seconds.

Morphological analysis of the peak area based on photos of the southeast sector from June 3 to May 28, 2021, shows that there is a difference in height of the central dome of 1 m.

The intensity of this week's earthquake is higher than last week. - The deformation of Mount Merapi, which was monitored by EDM this week, showed a distance shortening rate of 0.9 cm / day.

The alert remains at 3 / siaga

The current potential danger consists of lava avalanches and hot clouds in the South-South-West sector covering the Yellow, Boyong, Bedog, Krasak, Bebeng and Putih rivers for a maximum of 5 km and in the south-eastern sector. , the Gendol river up to 3 km. The eruption of Fagradalsfjall continues, and on May 4, 2021 at around 7 a.m., lava flows around Gónhóll and cuts the path to the observation point: the area has become an isolated island ... a new kipuka is born !.

On June 3, the photos of the eruptive site have silvery reflections, due to the volcanic glass.

Glass forms when magma cools rapidly and can take on many different shapes, from sparkling rocks to stringy fibers, hair, or Pele's tears.

As magma degassing faster than before, it becomes less viscous (more fluid) and therefore cools faster in interaction with air. Rapid cooling freezes the uncrystallized magma and turns into volcanic glass. Regarding the eruption at Nyiragongo, seismic data recorded on June 4 indicates a continuous decrease in the number and magnitude of earthquakes (most of them are not felt).

The GPS network of the Goma Volcanological Observatory did not detect any movement of movement of the magma below the city of Goma and Lake Kivu.

The latest satellite data recorded indicate that the ground continued to deform between May 27 and June 2.

However, the readings of the openings of the cracks measured in the city of Goma do not indicate the deformation since June 1.

New landslides are still possible in the crater and could cause ash fallout in neighboring regions.

The favorable development of the situation continues even if we cannot totally exclude a revival in activity. This justifies the continuation of intensive surveillance and the daily reassessments of the situation carried out by the OVG. 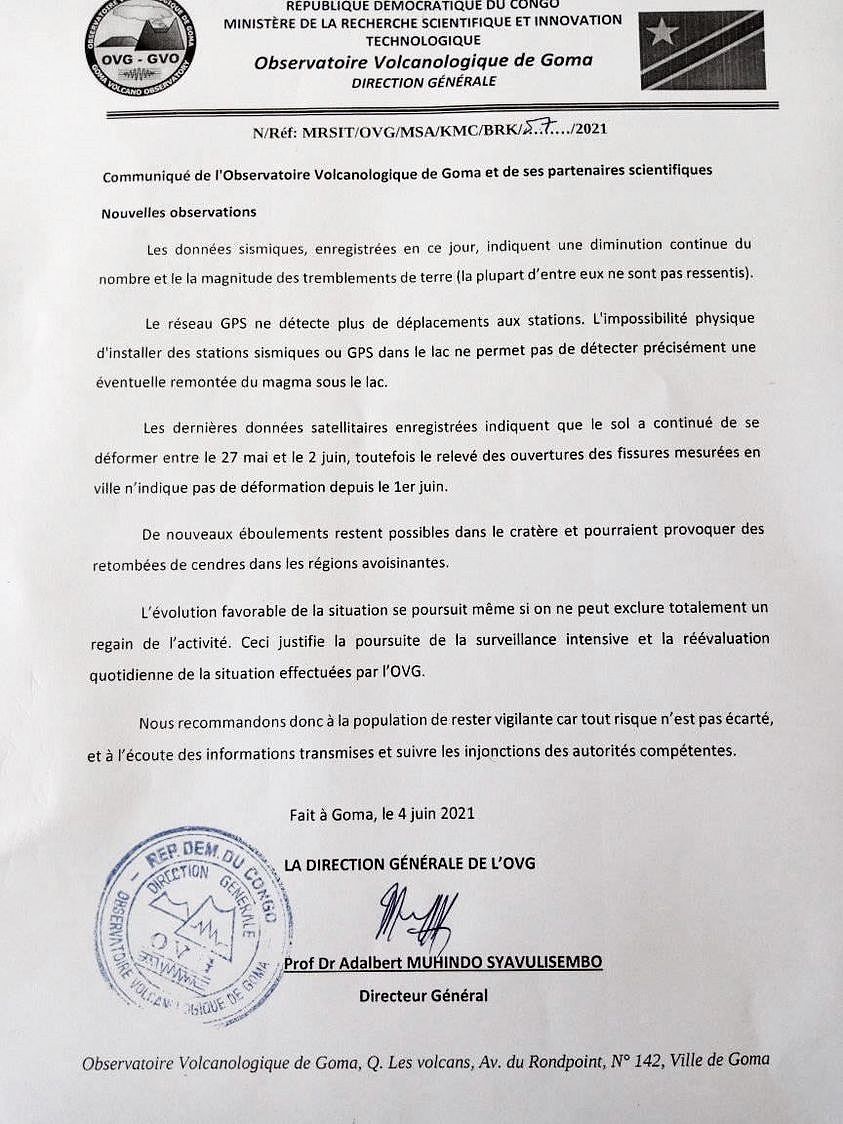