From around 22:00 UTC on July 19, 2021, the resumption of Strombolian activity at the level of the south-eastern crater of Etna is observed. According to the forecast model, the volcanic ash produced by the current activity is dispersed in the direction of S.
The temporal trend of the mean amplitude of the seismic signal which from the afternoon of day 18 is characterized by large fluctuations, currently shows a fairly stationary trend on medium-high values. The location of the centroid of the volcanic tremor sources is currently located in correspondence with the southeast crater at an altitude of about 2700 m above sea level.

From around 02:20 UTC on July 20, a sudden increase in the amplitude of the volcanic tremor was observed which reached high values. The centroid of the tremor sources is located in correspondence with the southeast crater at an altitude of about 2900 m above sea level.

The INGV reports at 05:47 UTC the gradual transition of Strombolian activity towards a lava fountain at the crater of
South East. Based on the forecast model, the eruptive cloud produced by the current activity disperses towards the SSE. In addition, an overflow of lava is observed from surveillance cameras to the southwest.

The activity is ongoing ... to be continued 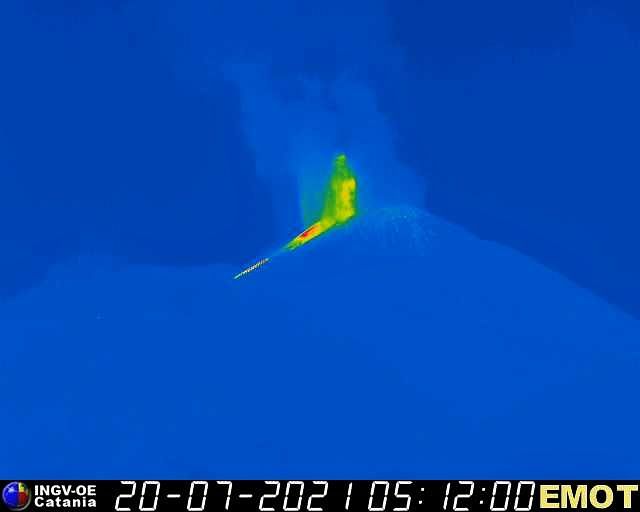 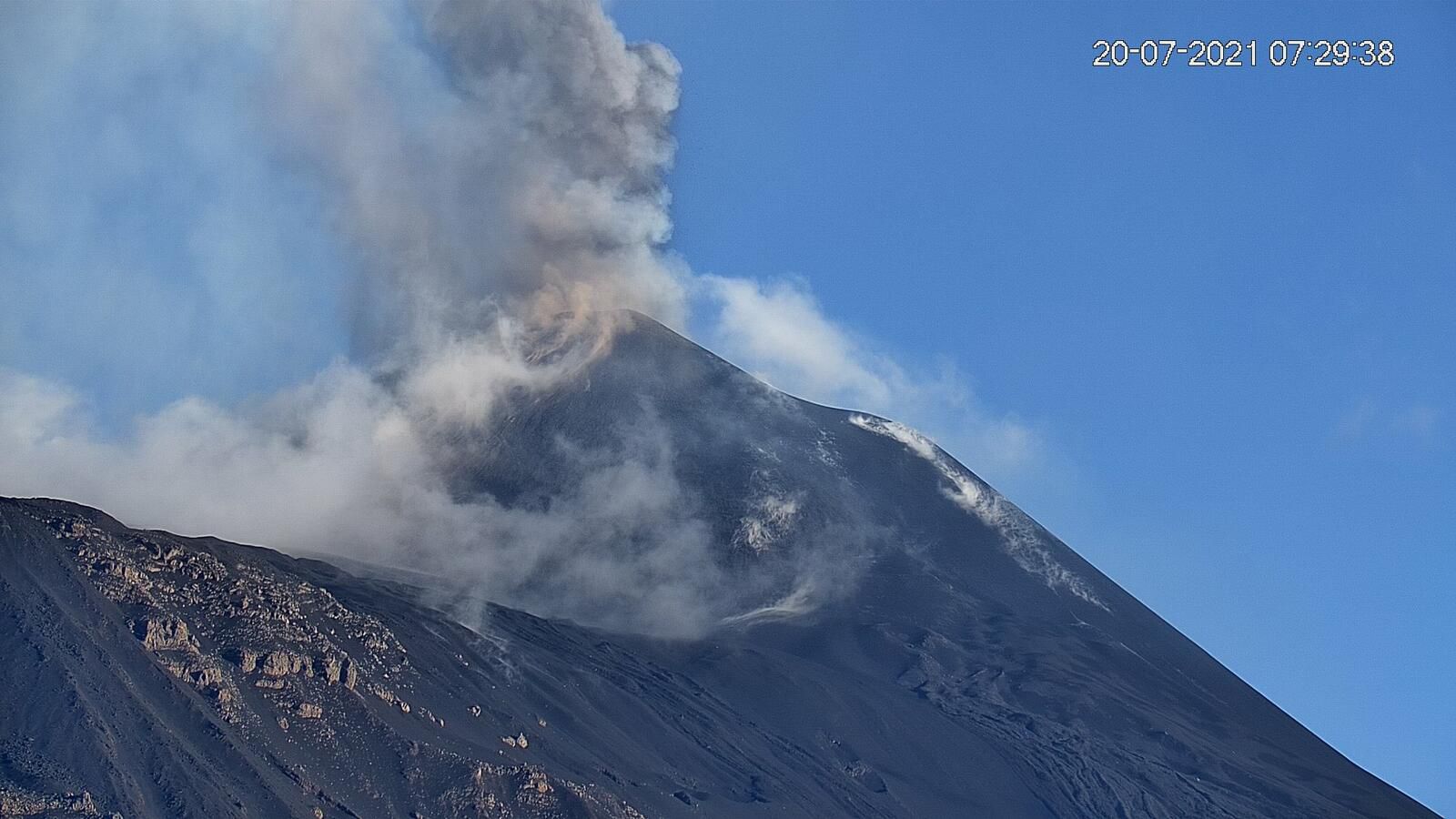 From around 08:10 UTC the tremor showed a rapid decrease in values ​​which are currently at an average level with a downward trend ...
and the lava fountain of the southeast crater has ceased, weak Strombolian activity continues at the southeast crater with emission of ash.

Etna south-eastern crater - images from January and 20.07.2021 showing the evolution of the SEC - comment by Boris Behncke below - EMOT / INGV OE webcam

" Six months and three days separate these two images taken by the thermal surveillance camera of Montagnola," EMOT ", on the high southern slope of Etna. Barely freed from its clouds of ash and gas of the last paroxysm (morning of July 20, 2021), the Southeast Crater from this point of view shows a proud cone, almost perfectly symmetrical, and tens of meters higher than at the beginning of this year. Then it seemed crouched, it was wide and flat, a set of volcanic cones pushing side by side and partially on top of each other, the old, the new and the “saddle.” Now the active vents are concentrated exactly in the center of this complex apparatus, and as in the olden days, 20 years ago, the South-East crater shows itself as a full-fledged volcano, pretending to be * it * Etna ". - Comment from Boris Behncke / INGV In addition, the seismicity was characterized by:

The public / tourists are not allowed to approach the crater within 2 km of the crater.

In Sabancaya, the week of July 12 to 18, 2021, is characterized, like the previous week of a moderate level of activity, with an average of 100 volcanic explosions per day, accompanied by plumes of ash up to 2,000 meters above Summit.

I.G. Peru provides information for the week 1.124 volcanic earthquakes associated with the circulation of internal magmatic fluids. Volcano-tectonic earthquakes, in connection with the fracturing of rocks occur in an area north of the volcano, from M 1.8 to M 3.1.

No significant deformation anomias; Eleven thermal anomalies, associated with the presence of a surface lava body in the crater, were observed, with a max. of 48 MW.