Activity of Ili Lewotolok, Merapi, Fagradalsfjall and a mud volcano in Azerbaijan. The eruption of Ili Lewotolok, which began on November 27, 2020 (GVP), continues.

Seismicity has been on the rise since mid-June 2021.

The eruptive episodes follow one another in recent days: the PVMBG noted an eruptive episode on July 5 at 08:36 WITA, accompanied by a plume of gray ash observed at about 1,000 meters above the summit, and drifting towards the southeast; its seismogrammic imprint is of a max. 45 mm for 42 sec.

The VAAC Darwin issued an orange aviation code on July 6. The Merapi, on Java, presented yesterday July 5 a white plume, observable at 100-150 meters above the summit.

Seismicity was characterized by: In Iceland, the eruption of Fagradalsfjall continues according to the pattern noticed in recent days, as evidenced by the tremor diagram. A loud explosion rocked the Caspian Sea region on July 4 at ~ 9:30 p.m. local, where Azerbaijan has vast offshore oil and gas fields.

The cause of the explosion, which raised a column of fire into the sky on Sunday night, was not immediately determined, but state oil company Socar said preliminary information indicated it was it was a mud volcano.

Socar spokesman Ibrahim Ahmadov was quoted by Azerbaijani news agency APA as saying that the explosion took place about 10 km (six miles) from the Umid gas field, which is located 45 miles (75 km) from the coast of the capital, Baku.

Mark Tingay, a mud volcanoes expert and assistant associate professor at the Australian University of Adelaide, said the evening July 4 explosion in the Caspian Sea "could certainly be a mud volcano" and that the location "roughly corresponds" to a mud volcano called Makarov Bank, which exploded in 1958, releasing a column of flame 500 to 600 meters high and 150 meters wide.

The country has "hundreds" of mud volcanoes, a quarter of which are known to erupt violently. 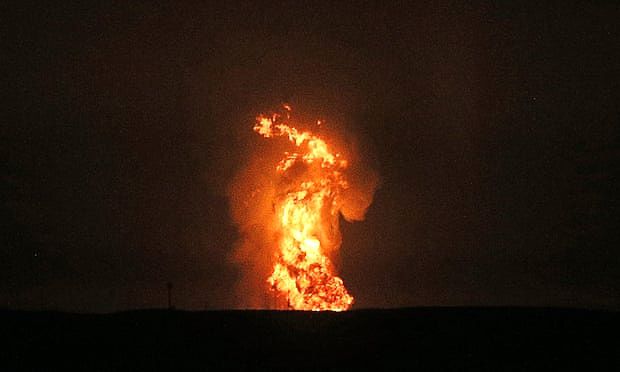