In Guatemala, the Fuego observatory reports this July 3, 2021 from 3 to 5 explosions per hour, accompanied by ash plumes at 4,500-4,700 m. asl. scattered in a north and west sector. Meanwhile, a white to gray degassing column is observed at 4,400 m Asl.

Ash fallout is sporadic, between weak to strong, on the communities of San Miguel Duenas, Parramos, Jocotenango and Chimaltenango;

Avalanches are reported in the direction of the Ceniza, Trinidad, Raniluya, Santa teresa and Las Lajas barrancas, part of which reaches the vegetation limit. 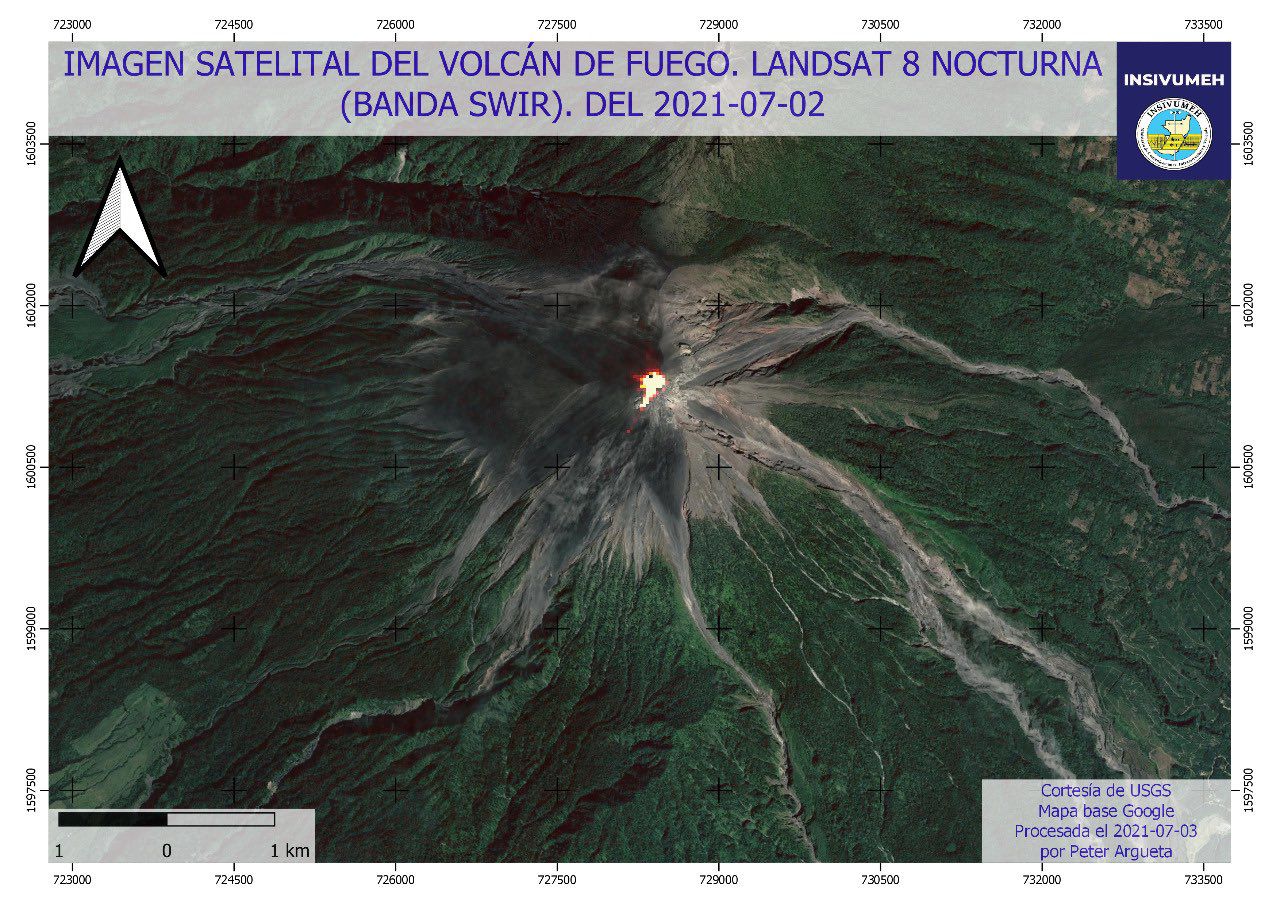 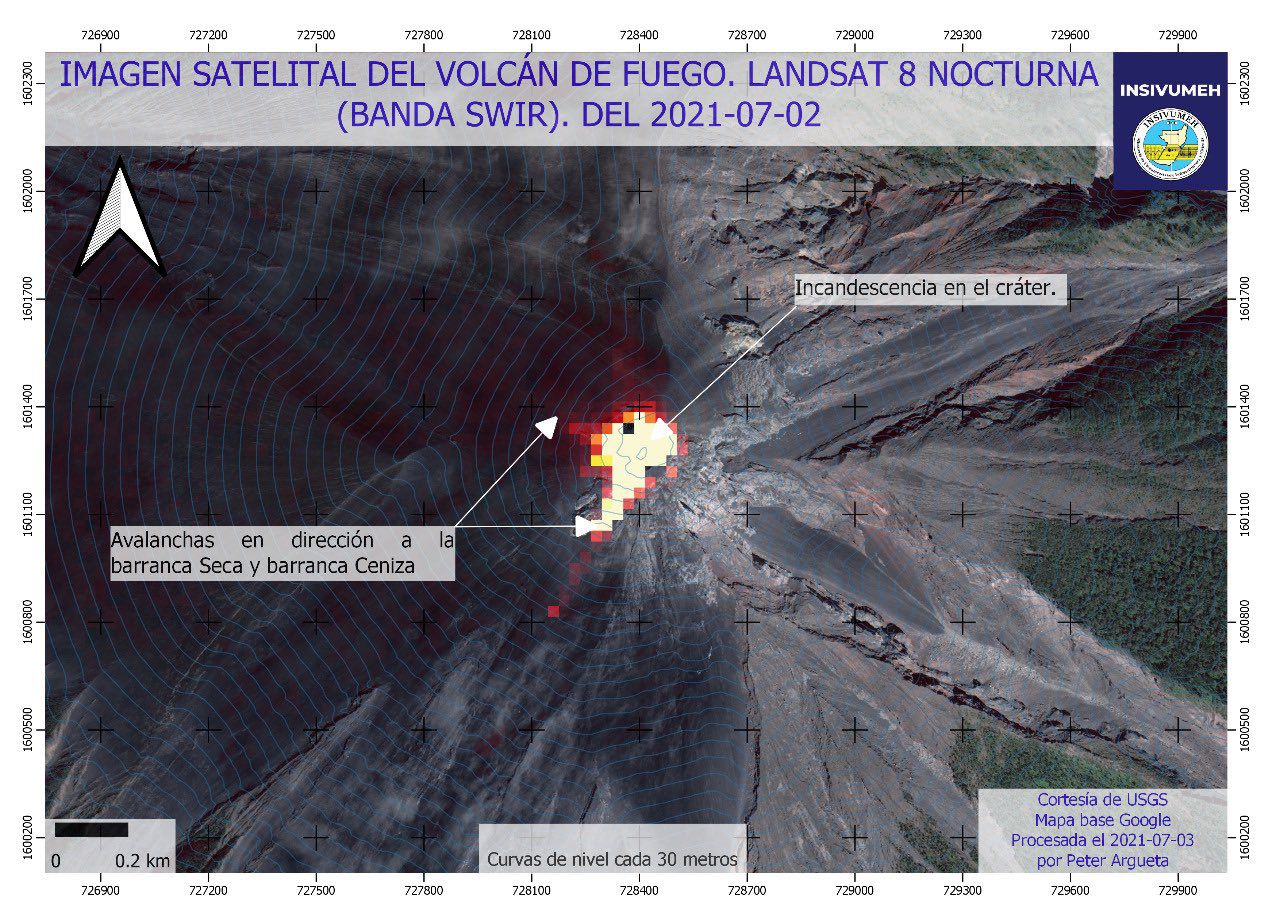 The monitoring stations installed near the NevadosDeChillán CV recorded this Saturday, July 3, at 1:51 p.m., 2 explosive events associated with the dynamics of fluids inside the volcanic system (LP).

The volcanic alert remains in Amarilla. In the last 24 hours, the Taal Volcano Monitoring Network recorded 31 low-frequency volcanic earthquakes and a low-intensity background tremor, which has persisted since April 8, 2021. The temperature of the main crater lake is 71.8 ° C and the water pH of 1.59.

The highest levels of volcanic sulfur dioxide emissions and tall, vapor-rich plumes from the main Taal crater were recorded on July 3, 2021.

SO2 emissions averaged 14,699 tonnes / day, the highest never recorded at Taal, while the upwelling of the main crater lake generated plumes of steam that rose 2,500 meters above Volcano island. The high SO2 emissions could be followed by eruptive activity at the main crater similar to increases in SO2 flux of 14,326 tonnes / day and 13,287 tonnes / day on June 28 and the morning of July 1, 2021, respectively, which preceded the short-lived phreatomagmatic eruption at 3:16 p.m. on July 1.

In addition, the increase in SO1, associated with high relative humidities of 79-91% and wind speeds of 0.5-2 meters / second over Lake Taal based on data from All- stations Weather from the observatory of the Taal volcano and the volcanic island, is also likely to favor the formation of smog or volcanic vog on the riparian communities of the province of Batangas.

Alert level 3 prevails over the Taal volcano and the current SO2 parameters indicate an ongoing magmatic extrusion at the main crater that could lead to subsequent explosions. In June 2021, the OVPF recorded in the Piton de la Fournaise massif in total:

• 48 superficial volcano-tectonic earthquakes (0 to 2.5 km above sea level) below the summit craters;

• 119 collapses (in the Dolomieu Crater, the ramparts of the Fouqué and Piton de Crac enclosures, and the East River).

The inflation of the building, which began in April 2021, continued throughout June 2021. This inflation showed a build-up of pressure in the superficial magmatic reservoir located around 2 km deep.

Since June 7, 2021, a new trend of increasing CO2 fluxes has been recorded both in the far field, and to a lesser extent in the near field.

The building's inflation and the CO2 levels in the soil which remained high in June 2021 witnessed magmatic transfers from deep areas to the superficial magmatic reservoir which continued after the end of the eruption of April 9-May 25, 2021. Illustration of the deformation over the last six months (eruptive periods are in red). The variations in distance between two GPS receivers crossing the Piton de la Fournaise building, at the top, at the base of the terminal cone and in the far field are represented here. A rise is synonymous with elongation and therefore swelling of the volcano; conversely, a decrease is synonymous with contraction and therefore deflation of the volcano (© OVPF-IPGP).