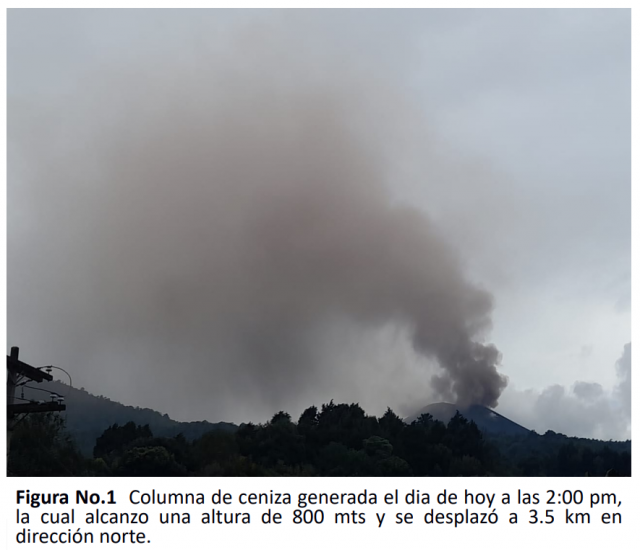 The Pacaya volcano presents the characteristics of a new phase of activity after almost 4 months of low activity. The volcano could have a continuous explosive behavior, with formation of lava flow and eruptive plumes.

On August 4, a constant degassing was observed, and in addition there were 3 moderate explosions (9:05 a.m., 1:40 p.m. and 2:21 p.m. local time), which expelled columns of ash at an altitude of 3,500 m, with a displacement towards the north, at a distance of about 12 kilometers, reporting ash fall in the communities of Mesías Altas, Mesías Bajas and Villa Canales.

The Mackenney Cone crater has undergone significant changes since the last eruptive phase, having destroyed the cinder cones and lava flows that filled its interior, showing a crater of 100m depth ; ashes emanate from deep. Around the crater there are a few cracks, so the area is considered unstable. The ascent to the Mackenney crater is prohibited. It is recommended not to visit the cracks in areas affected by recent lava flows on the northern flank.

It is recommended to take precautions with air traffic in the region of the Pacaya volcano, due to the presence of ash in the volcanic perimeter, at a height of 3,500 m above sea level (11,482 feet), in a north direction, northeast, at a distance of 12 kilometers. The INGV reports that from 11:50 UTC on August 4 a discontinuous emission of ash from the northeast crater of Etna is observed.

The volcanic cloud produced reaches a height of about 6000 m above sea level and, according to the forecast model, disperses in the NE direction.

The temporal trend of the mean amplitude of the volcanic tremor does not show significant variations and the values ​​remain low. The center of gravity of the volcanic tremor sources is located in correspondence with the south-eastern crater at an altitude of about 2,900 m above sea level. The infrasonic activity remains at low levels with events localized in correspondence with the Bocca Nuova. High Frequency GNSS Network Data does not show significant changes

At 19:35 UTC, ash emissions from the northeast crater ceased. 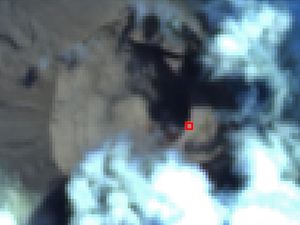 Nyiragongo - hot spot in the crater - image Sentinel-2 bands 12.11.8A - via Mounts project - one click to enlarge

At Nyiragongo, a small hot spot was visible on a Sentinel-2 image from July 26 (located on the eastern edge of the crater - hot gases?),

and Charles Balagizi reports a plume of ash and gas above the central crater on August 4, 2021 at 2:20 p.m. local time.

Source: GVO in the weekly report of the Global volcanism program High levels of gas emissions continue, but the ratio of carbon dioxide to sulfur dioxide has declined. A more detailed assessment of this observation supports the presence of shallow magma.
There is still great uncertainty about the mechanisms that drive current activity. Most of the scenarios are consistent with a slightly increased level of unrest at Whakaari / White Island and the Volcanic Alert Level remains at 2 (moderate to increased unrest) and the aviation color code at yellow. There is no obvious sign of eruptive activity.