Another climax at Etna ! From 12:00 UTC there is a significant increase in the amplitude of the tremor, which reaches high values ​​(red area). This phenomenon is also followed by an increase in infrasonic activity, with approximately 1 event per minute. The sources of the tremor are located to the SE of the SE crater, at a level of about 3000 m. altitude Over the past few hours, there has been no significant change in the distortion to the GPS and tilt networks.

At 3:45 p.m. GMT, there is an increase in Strombolian activity with passage to a lava fountain. There is a further increase in the amplitude of the tremor, which reaches high values. Infrasonic activity also increased, both in terms of frequency and amplitude of signals. The sources of the tremor are located SE of the SE crater, at a level of approx. 3.000 m. altitude. 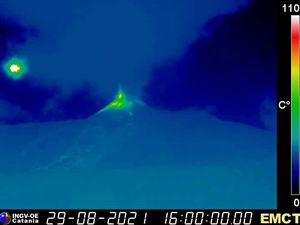 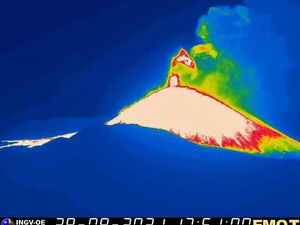 The INGV announces at 18:27 UTC that the explosive activity continues at the South-East summit craters. This activity produced two lava flows, one towards the Valle del Bove and the other towards the southwest, the latter encircling the Monte Frumento Supino. The flow fronts are still active. The fallout of ash and lapilli affected the municipalities of: Milo, Sant'Alfio, Giarre, Fornazzo.

The explosive activity at the SEC ceased at 20:37 UTC. The lava flows are cooling. The amplitude of the tremor is currently at medium-high levels. The signal sources are located SE of the SE crater. The infrasonic activity has practically ceased.
The soil deformations recorded on the clinometric network were exhausted, which revealed, during the lava fountain, variations of up to about 2 microradians at the Cratere del Piano (ECP) station.