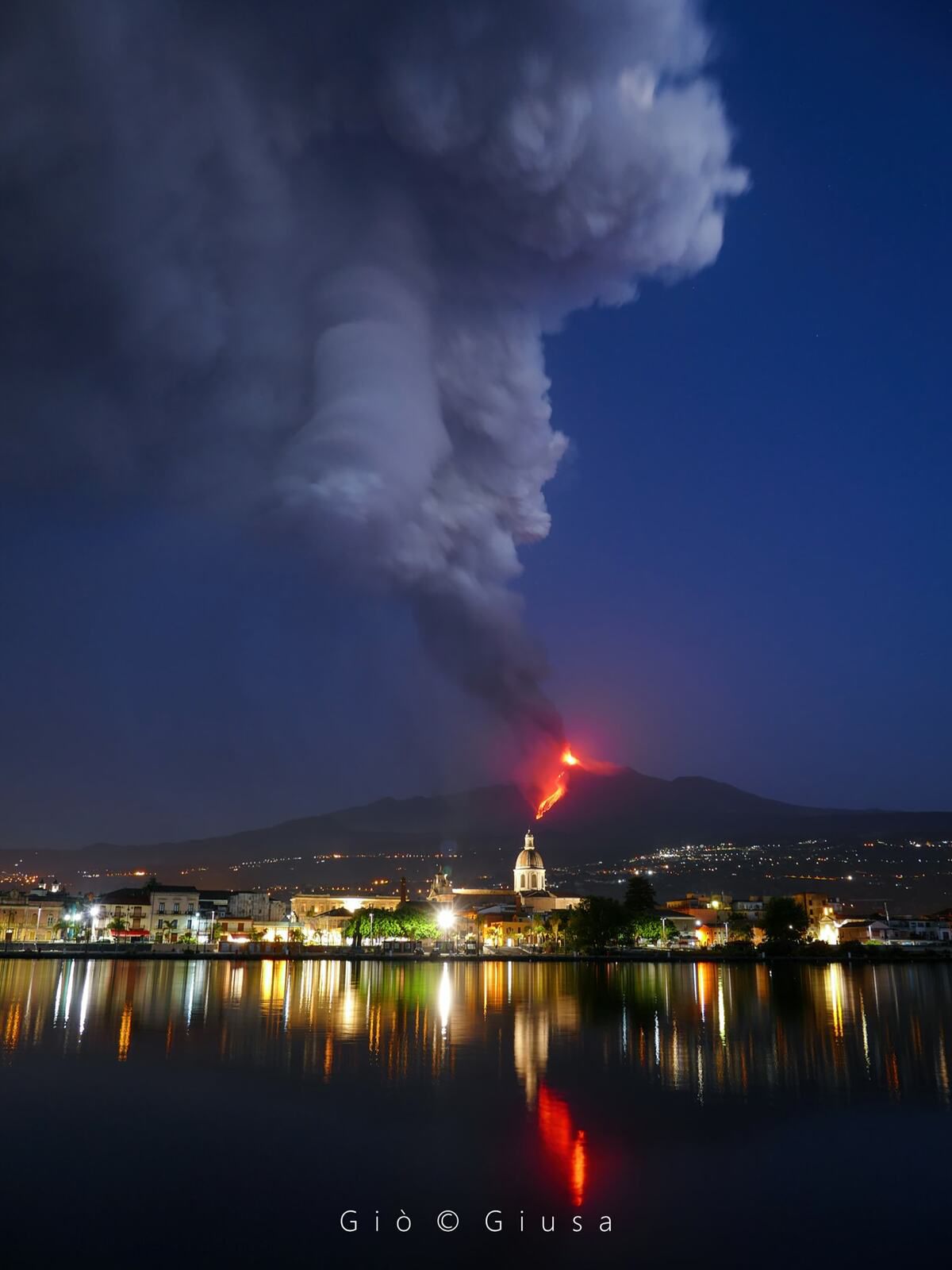 From the analysis of Etna's video surveillance network, it is noted that a weak emission of lava continues from the east and south-east base of the SE crater. The lava flows remain confined to an altitude of about 2900 m.
The last ash emission from the SE crater occurred around 13:30 UTC.

During the morning of August 9, the average amplitude of the volcanic tremor showed significant and sudden fluctuations between medium-low and medium-high values, linked to the appearance of low-frequency transient phenomena associated with the activity. explosive at the level of the SE crater and whose trace infrasound is also clearly visible. At 20h UTC, the amplitude shows average values ​​and the centroid of the sources is located in the area of ​​the Voragine crater at an altitude of about 2.700 m above sea level. Regarding infrasound activity, except for the aforementioned phases of rapid increase in the rate of occurrence in the amplitude of events at the SE crater, it remained at a medium-low level with sources in the area. from the Bocca Nuova crater. The infrasonic activity is currently low.
Since the last update, no significant changes have been observed in the time series of soil deformation monitoring stations.

The surface activity in the Copahue volcano, province of Neuquén on the border of Chile and Argentina, presents this August 9, 2021 water vapor and gas emissions. In the evening, incandescence is visible in the El Agrio crater, as are pulsatile gas emissions.

The Copahue Volcano presents a seismic signal at low energy levels. The Sernageomin speaks of an eruptive work which respects the NORMAL parameters.

Copahue, seen from Caviahue - degassing from 08.09.2021 in the morning - photo Valentina Sepulveda During the month of July, Sernageomi recorded 68 VT earthquakes, associated with rock failures; the largest was M 2.5, located 6.5 km northeast of the active crater and at a depth of 4.8 km.

Two LP earthquakes, related to the dynamics of internal fluids were observed.

During the month of July, vertical degassing columns were spotted reaching max. 540 meters above the crater, as well as occasional nocturnal incandescence.

The technical alert is green, with the designation of an assignment zone of 500 meters in radius around the crater.

In Chile, the Sernageomin keeps the Amarilla alert for the Nevados de Chillan, the Hudson and the Laguna del Maule complex. A moderate explosive event from Chirinkotan Volcano (Chirinkotan Island), northern Kurils, occurred at 08:15 UTC on August 09. A 13x10 km ash cloud drifts at an altitude of 2300-2500 m. , about 26 km south-southeast of the volcano.

The moderate eruptive activity of the volcano continues. Ash explosions up to 10-15 km (32,800-49,200 feet) altitude. could arise at any time. Current activity could affect international and low-flying aircraft.

The last explosive eruption of the volcano dates back to 2013-2015; explosions sent ash up to 4 km altitude. 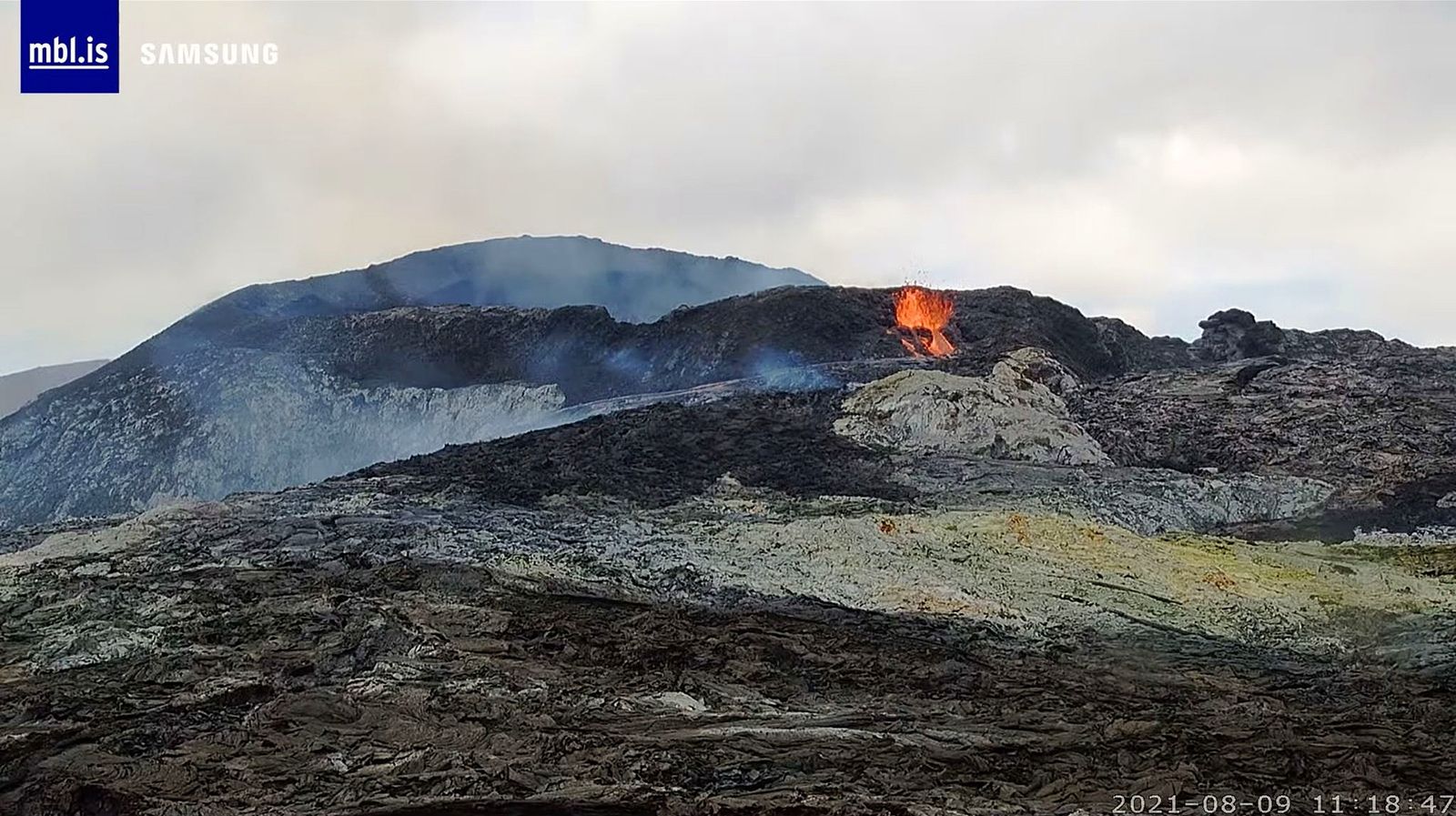 A new vent / also referred as "a hole" opened at the edge of the active Icelandic / Fagradalsfjall eruption crater on August 9 at 10:06 am local time, and both are now producing lava from the same source. Volcanic tremors at the site began to increase around 3:00 a.m. this morning, continuing the eruption's fluctuating activity pattern. Note that this new vent is no longer productive at 2:40 p.m. local time. 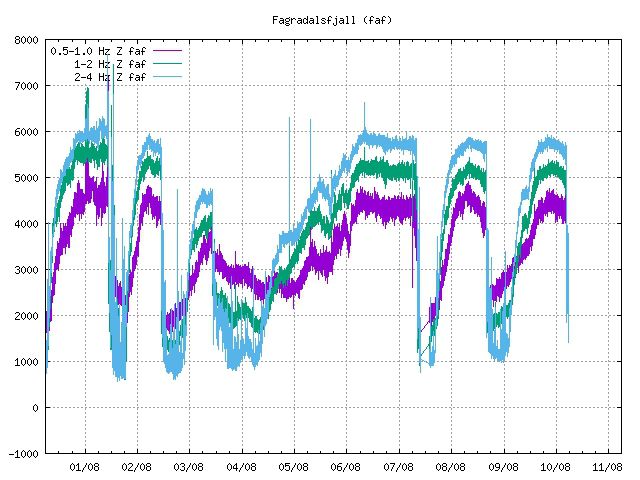 The nocturnal activity was important; many tongues of lava have been fed and a torrent of lava is pouring down into Meradalur, while some of the lava flows into Geldingadalur. The flow remains high, with an average of 11-12 m³ / second according to recent measurements

Volcanologists Þorvaldur Þórðarson and Ármann Höskuldsson were at the eruption site yesterday to take action: “ This is a very unique eruption that is calmly rising to the surface and nothing seems to affect it. He appropriates the land as he pleases ". Several steam emissions were observed in Reventador, Ecuador, which reached up to 1,200 meters above the crater in a north-westerly and westerly direction. The Washington VAAC reported ash emission up to 988 meters above the summit to the west.

Seismicity is characterized over the last 24 hours by 34 explosion earthquakes, 42 LP earthquakes and 3 tremor period.
MIROVA has recorded 1 low thermal anomaly in the last 24 hours.
During the night, an incandescence was observed at the level of the crater. During the morning of August 9, the weather remained very cloudy.